Is the Impossible Burger a threat to vegetarianism? 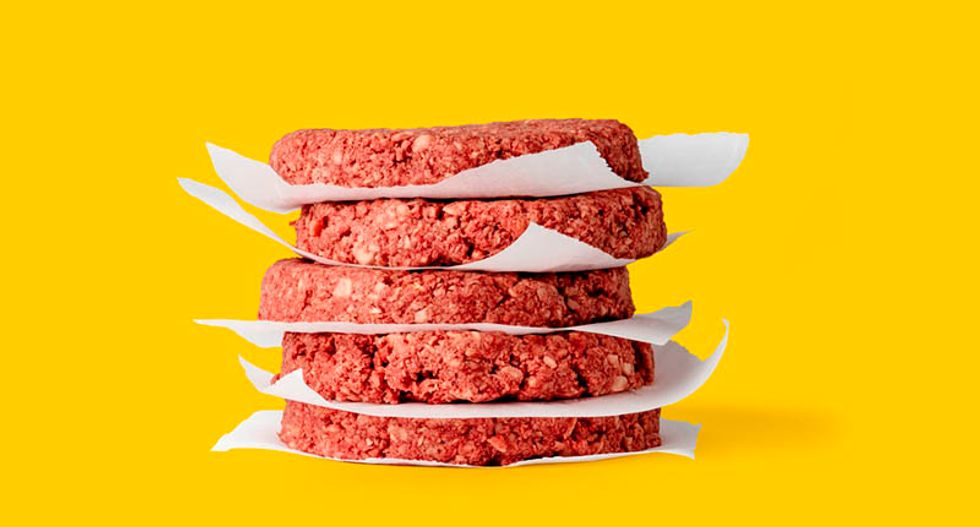 Fake meats have been a foodstuff for decades now, mostly so that a lot of popular, meat-based dishes could be adapted into vegetarian recipes. But it's only been quite recently that, thanks to the soaring popularity of the Impossible Burger and the Beyond Burger, that there's a real chance of these fake meats actually replicating the taste and feel of genuine, harvested-from-a-once-breathing-and-feeling creature meat. Now a day hardly passes in which there isn't some kind of news item about these just-like-the-real thing ground beef substitutes, which are popping up in fast food chains and slightly fancier pubs where one expects to find that good old American staple, the hamburger, on the menu.

As someone who's been a pescatarian for 16 or 17 years now, however, the rise of fake meats is creating a feeling that's reminiscent of the experience of watching the small indie band you've adored for a long time finally achieve mainstream success. On one hand, you're thrilled to see more people find their way to liking something you've liked for a long time. On the other hand, you worry that going mainstream will destroy the very thing you loved in the first place.

I tried the Impossible Burger recently at one of the many charming, tiny pubs that dot the landscape of Philadelphia — a restaurant where I had stuck to ordering a beet burger in the past — and found, as many do, that the experience was just fine. Even though the last time I ate ground beef was before the Iraq War began, the burger did strike me as an authentic-tasting representation of the burgers I used to consume mindlessly as a kid.

But it also reminded me of why it had been so easy for me to quit eating most meat, except for an occasional bout of fish, so long ago: I never really liked meat, particularly beef, in the first place. While I enjoyed the novelty of the Impossible Burger, it felt like no substitute for some of the finer veggie burgers I had enjoyed in the past, the kind that don't try to taste like meat at all.

There's very real reason to worry, however, that the Impossible Burger and other products like it might be a threat to the kind of vegetarian cooking I like, which doesn't try to imitate meat but focuses on drawing out the unique taste and feel of vegetables and legumes. I worry that many restaurants, which already often have no more than one or two vegetarian meals on offer in the first place, will decide that it's easier to just sell the Impossible Burger, instead of vegetarian sandwiches and other dishes that unapologetically spotlight vegetables.

Veggie burgers get a bad reputation, from meat eaters who incorrectly assume they exist to replicate the taste of meat. But the best ones do the opposite and use the patty form to really showcase the flavor of whatever combination of beans, cheese, and vegetables it's made of. For instance, one of my favorite burgers to make at home is this beet and goat cheese burger from the New York Times. That burger doesn't try to taste like meat, and nor should it, since both beets and goat cheese are tastier than meat (in my opinion, anyway). Similarly, I've figured out over the years what restaurants offer black bean or quinoa burgers that are delicious in their own right, and not a weak substitute for ground beef.

"Fruits and vegetables are sexy in a way that a chicken breast can never be," chef José Andrés wrote in his recent cookbook "Vegetables Unleashed". "Think about it: What happens when you bit into a piece of meat? The first five seconds are kind of interesting, but then you spend another twenty seconds chewing something that has no flavor."

While my internal thoughts weren't quite so snappily worded, that was the thinking that led me to give up most meat entirely as a young woman. I didn't really like eating meat and only ate it out of laziness and incuriousity. By giving it up, I have opened myself up to a whole new world of cooking and flavors, and to experiment with vegetables — like beets — that I had literally never eaten as a child growing up in west Texas.

And I firmly believe that's one reason Americans don't eat as many vegetables and they would like. We've grown accustomed to thinking of meat as the main food and so end up in a rut of burgers and grilled chicken breasts and not thinking of the wide variety of vegetables that could diversify our diets in a way that's both healthy and more fun, to boot.

A big part of that problem is that there are not enough opportunities to eat truly vegetarian dishes, the kind that lean into the beauty of vegetables, instead of just trying to wing it with meat substitutes.

I don't want to be a curmudgeon or a snooty hipster about this. If the Impossible Burger helps Americans eat less meat and more vegetables — something most Americans want to do — then I really don't wish to deny that to anyone.

But having been a shunner of meat for a long time, I can say that the more sustainable approach to changing your diet is to actually change your diet. Learning to love vegetables on their own makes it easier to eat more of them.

Even for most Americans who don't want to become vegetarians, so much as they simply want to eat more vegetables, thinking more like a vegetarian can be helpful. Appreciating vegetables on their own, instead of lamenting that they aren't meat, makes you more likely to reach for the vegetables on the dinner table, cook vegetables at home, and order them in a restaurant. It's simply easier, in the end, to do something because you like it and not because it's like, well, eating your vegetables.