Intergenerational warfare is a scam 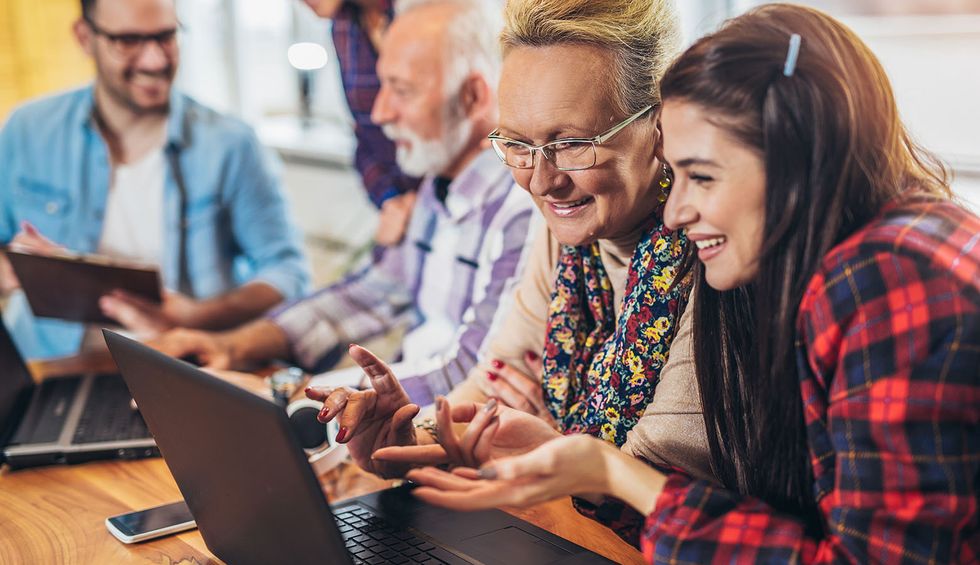 President Franklin Roosevelt famously remarked about attacks on Social Security, “It is an old strategy of tyrants to delude their victims into fighting their battles for them.” We can see that strategy at work today.

The “tyrants” are the billionaire class, ideologically opposed to contributing their fair share to the common good, and the politicians they finance. Those powerful forces are working surreptitiously to frame a narrative that so-called greedy geezers are to blame, selfishly taking for themselves at the expense of their grandchildren. Former Senator Alan Simpson (R-WY), who has used the term “greedy geezer” so often that many think he coined the term, said about seniors fighting cuts to Social Security, “[W]ho are the people howling and bitching the most? The people over 60… Those people… don’t care a whit about their grandchildren… not a whit.”

The goal of Simpson and his billionaire cronies is to convince younger generations to fight older generations over scraps, rather than joining together to demand more. A recent Twitter kerfuffle exemplifies the strategy to “delude their victims into fighting their battles for them.” Earlier this month, a story aired on NBC Nightly News about the Senior Citizen Education Program at the University of Minnesota. This program allows senior citizens to take college courses for only $10 a credit. Many people, particularly on Twitter, were outraged at the story. Why, they asked, are seniors taking classes for a nominal fee while young people are buried under a mountain of student debt?

That’s the wrong question. The right question is, how can Americans of all generations come together to fight for greater economic security for all of us? That includes expanded Social Security; tuition-free college and cancellation of student debt. The truth is that younger workers are going to rely on Social Security even more than today’s retirees. The truth is that seniors are better off if their grandchildren can start their adult lives debt-free.

The truth is also that, the University of Minnesota’s program aside, seniors across the country are in fact trapped by student debt along with their younger counterparts—and are even having their hard-earned Social Security benefits garnished to pay off those debts. According to the Consumer Financial Protection Bureau, student debt is an increasingly heavy burden on seniors. In 2005, 700,000 Americans aged 60 and older had student debt. By 2015, that number quadrupled to 2.8 million—and it’s no doubt considerably higher today. Seniors owe over $86 billion in student debt.

In many cases, this debt comes from helping their children (or grandchildren) attend college. Our broken system forced these seniors to choose between their own retirement and their children’s futures, and they picked their children. For the crime of wanting their family to live out the American Dream, they are condemned to decades of poverty.

In other cases, this debt comes from going back to school themselves, relatively late in life. Many people, particularly women, face ageism in the workplace as early as their 40s. Employers don’t want to pay the higher salaries that more experienced workers command, and they especially don’t want to pay higher health care costs (one of many reasons we need to enact Medicare for All).

Those laid off in midlife often chose to go back to school to gain new skills. In the process, they incur student debt that will follow them for the rest of their lives. Instead of a source of outrage, the University of Minnesota program should be a source of inspiration. It should be a model for what we need to offer everyone, of all ages.

Thomas Paine, a founding father of our nation, proposed that all young people be given a lump sum payment at the age of 21. Paine rightly saw that not only should people start adulthood free of debt, but they should also start with some property.

Tuition-free public college does not go as far as Paine’s vision, but it is an important start. People should be starting their adulthood with assets, not burdens. In the wealthiest country in the history of the world, everyone who wants an education should be able to get it without being shackled to debt for decades.

Furthermore, we must act aggressively to protect those who are already caught in the student debt trap. Senators Ron Wyden (D-OR) and Sherrod Brown (D-OH) have introduced the Protection of Social Security Benefits Restoration Act, which would stop the federal government from garnishing the Social Security checks of people with student debt. Passage of this bill would be an important first step. But we must go further.

In the fight to pass these wise proposals into law, we must be ready for Roosevelt’s “tyrants,” who will seek to use their money and influence to thwart the common good. They have always been with us and probably always will.

In the 19th century, the nation recognized the importance of public education. In response to the idea, John Randolph, a Virginia politician and wealthy landowner, argued against universal public schools, claiming it would perniciously “ease individuals of their natural and moral obligations” to take responsibility for the education of their own children.

Today, you hear similar arguments about the moral obligation of paying off the outrageous debts incurred for the “crime” of higher education. Just as our forebearers made public K-12 education a right, we must make public college a right despite the objections of modern-day John Randolphs. We must cancel the debt of those of all ages who find themselves caught in the student debt crisis. And we must be on guard against those who seek to divide and conquer us.

The reality is that, in the 21st century with its technological advances, today’s work often requires more than a high school diploma. Like free high school, there should be free college as well. It only makes sense that those who have been caught in the web of unaffordable college now have those debts canceled.

Expanding Social Security, tuition-free public college and the cancellation of student debt should not pit one generation against another. All of us are better off if grandparents have dignified and secure retirements, and grandchildren are well-educated, starting adulthood debt free. If we can join together to ensure that the wealthiest among us pay their fair share, all of that is within reach.