How this California official is building a disturbing genetic surveillance system 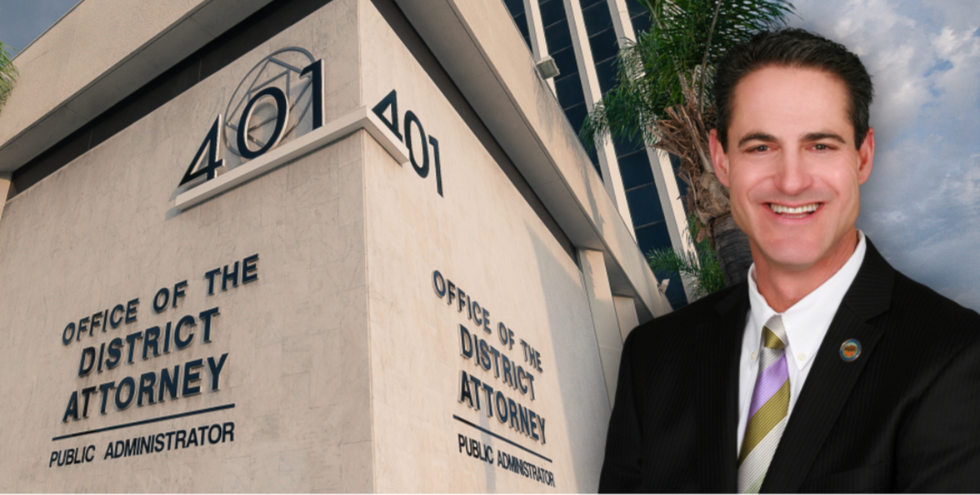 Photo via the Office of the District Attorney of Orange County
Filter
June 04, 2019

Here’s a good formula for dystopia: a ”spit-and-acquit” program to create a genetic surveillance system in return for non-prosecution of misdemeanors; a district attorney who thinks that people in recovery from problematic drug use are dangerous; and a rich county with “brain drain” fueled by millennial flight.

Where in California might this be? You’d be right if you guessed Orange County, cradle of eat-the-poor politicians like Richard Nixon and Ronald Reagan. A generation of angsty 2000s teens know it for The O.C., a portrayal of an outcast kid in a snobby beachside society. Fewer realize that its district attorney, Todd Spitzer, acts like some kind of dictator of Disneyland.

Spitzer (pictured above) only took office in January, but sadly, the attitude he embodies is nothing new—even if some locals were hopeful it would end.

For decades, Orange County prosecutors collaborated with the sheriff’s office to illegally ask certain prisoners to coax confessions out of suspects held in the county jail. When the story broke in 2016, the US Department of Justice opened an official investigation against the DA and sheriff’s offices. (The ACLU is still pursuing a case to end the informant program, with an appeal brief due soon.)

A judge found that then-DA Tony Rackauckas committed such egregious prosecutorial misconduct in this context that he was no longer allowed to seek the death penalty for Scott Dekraii, the worst mass shooter in the county’s history. Rackauckas has since admittedthat he suspected criminal wrongdoing by at least one of his prosecutors all along.

That was just the highlight for Rackauckas, whose brazen corruption was larger than life. Rackauckas also became the first DA to get a civilian review board. And outside of the courtroom, he was also known for getting his government employees to run his sham children’s charity, the Tony Rackauckas Foundation, and for wining and dining politicians with law enforcement money.

Every time there was a new scandal, one man cried out for Rackauckas’s head louder than any other: then-County Supervisor Todd Spitzer—who beat Rackauckas out as DA in the 2018 Republican primary.

In theory, Spitzer and Rackauckas should be spiritual brothers, not mortal enemies. Rackauckas opposed every recent criminal justice reform ballot initiative that California voters have supported in recent years; Spitzer also fear-mongered about these changes. At various points, both have cosied up with Henry Nicholas, a pro-”victims’ rights” tech billionaire who has been indicted for fraud, accused of threatening to kill his ex-wife, and charged for trafficking drugs on his private jet.

And despite claiming that he has “some serious concerns” about it, Spitzer loves the “spit-and-acquit” misdemeanor clearance system that Tony Rackauckas initiated. In a new investigation published by the California Law Review, UC Berkeley Law Professor Andrea L. Roth found that 150,000 people have so far paid $75 for a technician to take a DNA sample in lieu of being prosecuted for misdemeanors by Spitzer’s office.

While Congress has previously created DNA databases—like CODIS and NDIS—with the aim of solving extremely serious crimes like murder and rape, there are limits on what can be collected and from whom.

“These are the population that is the worst of the worst,” he said of homeless people, “and they do include sex offenders.”

In contrast, Spitzer is running what could be called a NIMBY—“Not In My Back Yard”— database for potential petty offenders, with no oversight, by dictatorial whim.

Spitzer proudly identifies as a NIMBY kind of person. As a county supervisor in March 2018, he issued the sole “No” vote on the Orange County Board of Supervisors against proposed new homeless shelters. When asked for his reasoning, he fear-mongered that homeless people were a danger to residents’ children.

“These in my opinion are the population that is the worst of the worst,” he said, “and they do include sex offenders.”

On the DA campaign trail, Spitzer bragged about having co-drafted Megan’s Law, which made the sex offender registry—then a lifetimerequirement for any level of sex offense—publicly available online. In one editorial, he wrote that “Reckless ‘Sober’ living ‘homes’” made the county “not safe”—reflecting his confidence in handful of county residents living near new sober homes who claimed an uptick in crime.

The world is undeniably moving in the direction of imposing increasingly invasive surveillance on everybody. But by all public accounts, DA Spitzer’s NIMBY database is the only one like it.

It’s still not unthinkable that it could be stopped. Unlike big-data gang databases, facial recognition surveillance or crime registries, spit-and-acquit is not yet powerfully embedded. It could yet be cut off at the source in OC—before law enforcement gets reliant on an easier tool to conduct the War on Drugs and other abuses than it ever imagined.

But that would require state legislators in Sacramento to sit and think a little: ”Would I be happy if my son or daughter gets caught with an ecstasy pill at Coachella, then gets put in a genetic catalog for monitoring for the rest of their lives? Not in my backyard...”