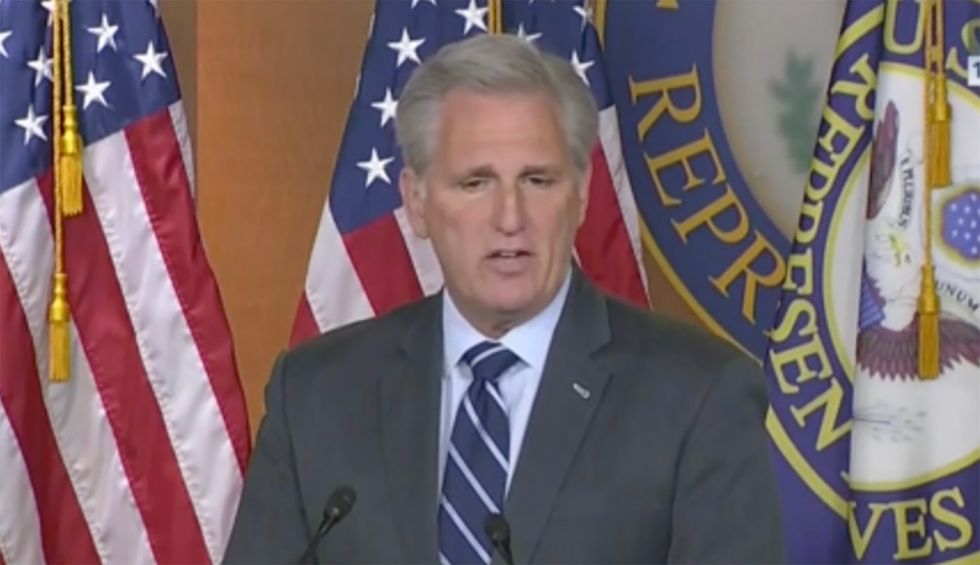 The leader of the Republican caucus in the House of Representatives on Thursday tried to deflect from President Donald Trump’s recent comments about foreign election meddling by attacking Democrats over a controversial intelligence document.

But it was quickly pointed out that the salacious dossier, which accused Donald Trump of having ties to Russia, was first turned over to the FBI by late Senator John McCain (R-AZ).

“Let me be clear. I don’t want to see any foreign government try to interfere in our elections. We should all stand united to ensure integrity in our elections,” House Minority Leader Kevin McCarthy (R-CA) said at a press conference, before going on a rant about the unverified intelligence document, which is known as the Steele dossier.

“What I am appalled about which what has happened in our elections. I watched in the last campaign, the Democrat presidential campaign spent $6 million to a foreign entity to travel the world to try to find something. When they could not find it, they made false accusations, salacious accusations at that. Drove this country into a special counsel lasting more than 22 months, using this false information, sending it to the FBI that went and got a FISA court. Then to spy upon Americans and took us through something we should never have to live again.”

“I did not hear the speaker be appalled at that. Or to have a chair of a House Intel committee think that he’s knowingly speaking on a phone to a foreign entity to supply some other false allegations. And what action did he take? Those are the things I’m appalled about that actually did happen,” McCarthy said.

But a reporter pointed out: “John McCain gave the Steele dossier to the FBI.”

“Who paid — no,” McCarthy replied, “what I’m talking about is the Clinton campaign and the DNC spending $6 million creating a false dossier.”

“You’re saying that the DNC made up the entire Steele dossier?” the reporter asked incredulously.