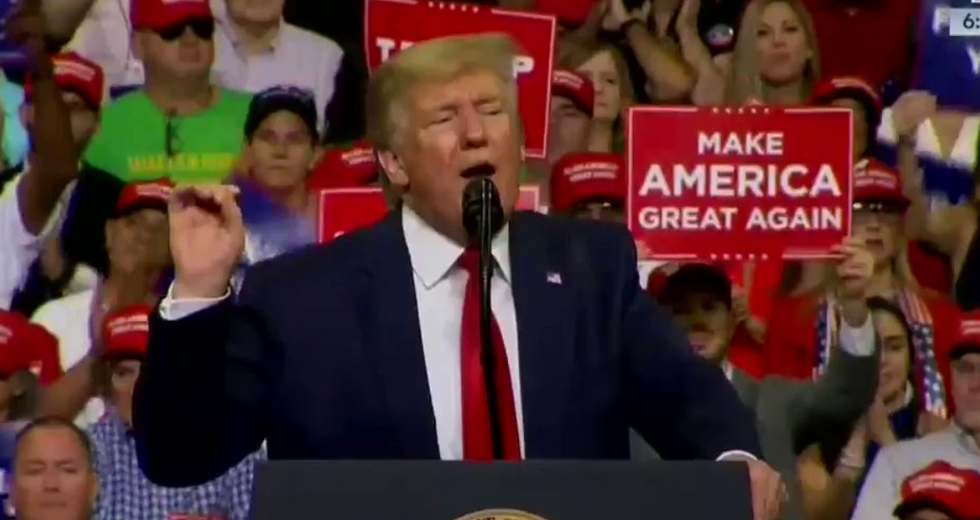 On Tuesday night, President Donald Trump held a rally that was billed as the official launch his re-election campaign — though he has never really stopped holding campaign rallies.

As expected, the president ranted, lied, and engaged in the raucous attacks that are central to his connection with Republican voters. Some of it was actually just sad, such as his continued obsession with Hillary Clinton.

Here are seven of the wildest, disturbing and pathetic moments from the rally:

1. He said Democrats "want to destroy our country as we know it."

Democrats have proposed nothing along these lines at all. Trump, on the other hand, has repeatedly talked about overhauling libel laws to make it easier to go after his critics, and multiple reports suggest he has tried to use the power of the presidency to punish media outlets who give him unfavorable coverage.

3. He continued to make up lies about and attack Hillary Clinton — who isn't running.

Trump accuses Clinton of not only deleting emails but having "acid washed" them. He says "acid washed" repeatedly.… https://t.co/OifKUqbozP
— Daniel Dale (@Daniel Dale)1560904786.0

4. After saying Democrats would go after their enemies with the law, Trump suggested Attorney General Bill Barr might still go after Hillary Clinton.

5. Trump continued to deny that the tariffs he imposes, which are just import taxes, are actually taxes on Americans.

They just are. This isn't even slightly controversial.

6. Trump claimed he was "officially" launching his campaign, and much of the media bought into this lie. But it made no sense.

7. Trump rolled out one of his favorite and most absurd lies: that he was responsible for legislation that was passed under President Barack Obama.