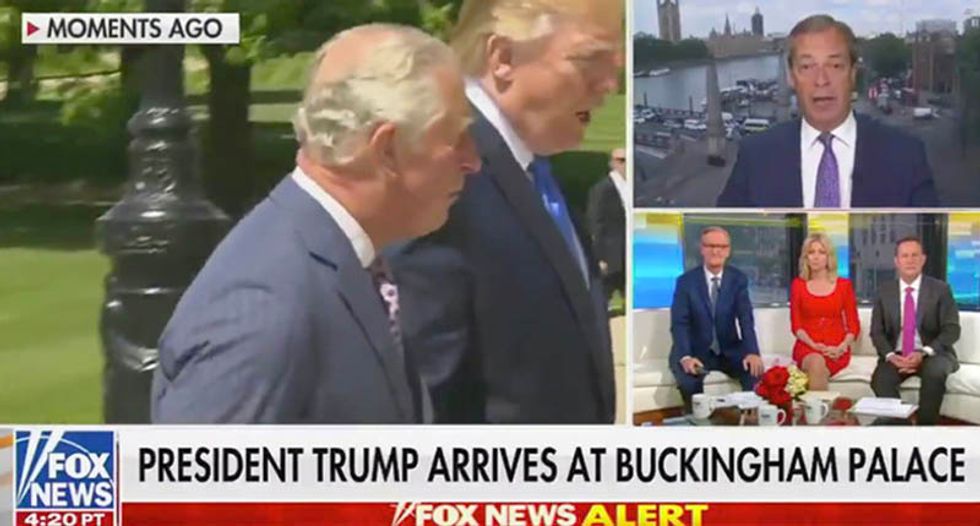 Donald Trump is visiting the United Kingdom starting Monday. Trump’s top motivations for the trip across the pond are to get him out of the United States while lawmakers decide whether or not to begin impeachment proceedings, and play some golf on the American taxpayers’ dime. But England isn’t going to be the safe space he might be hoping for. Even before Trump got on Air Force One, the English have been wary of the impending white supremacist in chief’s appearance in their country. England’s mayor and consistent critique of Trump’s brand of hate, Sadiq Khan wrote an op-ed in UK’s The Guardian, titled “It’s un-British to roll out the red carpet for Donald Trump,” just two days before Trump’s visit. Mayor Khan’s opinion, and those of the millions of Brits who are sick and tired of the general right-wing nationalist movements across the globe, can be summed up like this:

There are some who argue that we should hold our noses and stomach the spectacle of honouring Trump in this fashion – including many Conservative politicians. They say we need to be realists and stroke his ego to maintain our economic and military relationship with the US. But at what point should we stop appeasing – and implicitly condoning – his far-right policies and views? Where do we draw the line?

Activists and normal UK citizens-turned-activists, are protesting in all kinds of creative ways.

One Hertfordshire art student, Ollie Nancarrow, decided to use a lawnmower to create a message that Trump might be able to see on his flight into Stansted Airport.

Nancarrow told ITV News, "I wanted to show Trump that I oppose his views and policies on climate change and, as an artist, I use whatever canvas I have."

Here’s something a little more “profane.”

Downtown London made sure Trump knows how they feel, with a light show reminding Trump of more popular politicians.

Do these protests have any affect on Trump? Consider that the protest shown on the right—poking Trump concerning his anger toward the late Senator John McCain is based on the petty machinations of those around him to protect his fragile ego, I think these protests do get under his thin skin. All along the routes that Trump is expected to travel, people have set up signs of dissent.

And of course you cannot forget that the Trump blimp will be out and about.