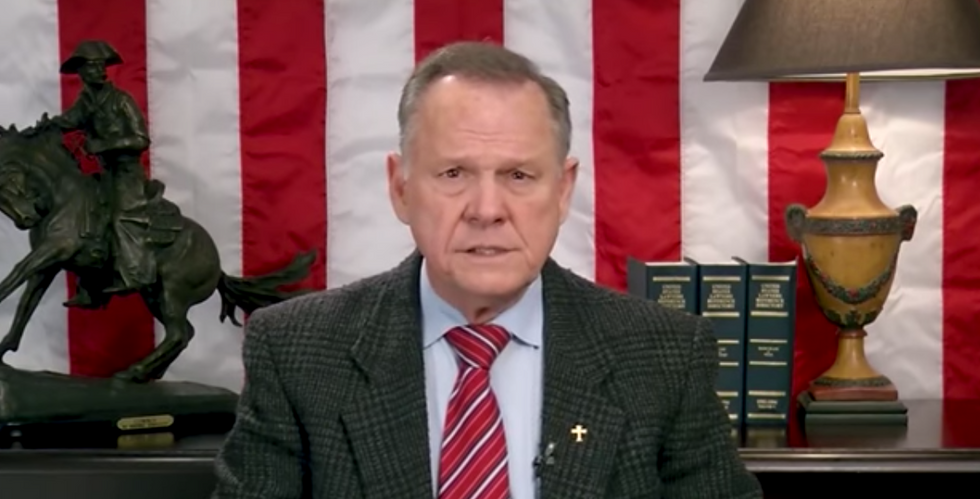 Roy Moore is planning to run once again for one of Alabama's U.S. Senate seats, despite the fact that his last campaign led to a disastrous defeat when multiple women came forward with accusations of sexual misconduct against him.

The Republican former judge won a contentious intra-party primary against the then-sitting senator in 2017, only to be beaten by Democratic Sen. Doug Jones in a close race. Alabama is a deeply conservative state, but Moore's extremist views had already left him weakened for a general election when the devastating allegations came out, which were almost certainly the deciding factor in his defeat.

The shocking allegations included the story of a woman who said Moore sexually molested her when she was 14 and he was 32. Another woman said that when she was 16, Moore groped her and tried to force her to perform oral sex. A total of nine women came forward with allegations against him; Moore denied the women's claims as a smear campaign.

Moore previously served as a justice on the Alabama Supreme Court, but he was removed from office in 2003 for refusing to obey an order from a federal judge to take down a monument to the Ten Commandments in the Heflin-Torbert Judicial Building. In 2016, he was suspended again as a justice because he attempted to defy the U.S. Supreme Court's ruling that recognized same-sex marriage across the country. He eventually resigned under pressure  and ran for the Senate.

“Why is there such fear, why such anger, why such hatred and opposition to somebody running?" Moore said in his announcement Thursday. "Why does the mere mention of my name cause people to get up in arms in Washington, DC? Is it because I’m a staunch conservative?”

Of course, Moore will have to win primary if he wants to run as Jones' Republican opponent, and it's not clear he will be victorious once again. But Jones himself faces an uphill battle in 2020 to hold on to his seat, given the state's conservative tilt. Ironically, the Democrat's best chance for re-election might be if the GOP decides to repeat its mistakes and nominate an extremely damaged candidate such as Moore.