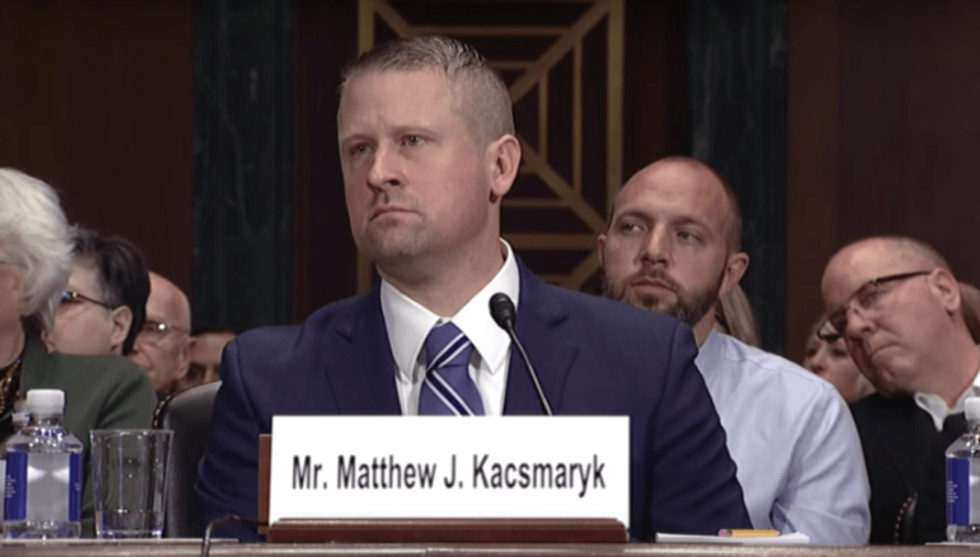 The Republican Senate has confirmed, 52 to 46, Donald Trump’s judicial nominee who in the past spewed anti-LGBTQ garbage that would make anti-gay Kentucky county clerk Kim Davis proud—we know this because he actually supported her when she was denying marriage licenses to gay couples. The Washington Post reported, “Just one Republican, Sen. Susan Collins, joined every voting Democrat to oppose Matthew Kacsmaryk’s lifetime appointment to the federal bench in the Northern District of Texas.”

An avalanche of 75 LGBTQ groups and allied organizations had opposed Kacsmaryk’s nomination, citing his personal writings, in which he made no secret of his “antipathy toward legal equality for LGBT people,” claiming transgender people have a “mental disorder,” as well as calling homosexuality “disordered.” In defending Davis, Kacsmaryk had compared her “to Quakers who refuse fight in war and Jewish butchers who follow kosher dietary laws.”

“Our concern is not just about Mr. Kacsmaryk’s extremist views and willingness to gut landmark decisions that form the basis of all protection for LGBT people,” the groups, including the National Center for Transgender Equality and Lambda Legal, had written to senators. “Our concern goes further than that. Mr. Kacsmaryk has been nominated to the Northern District of Texas, which has long been a favorite of those seeking injunctions against LGBT laws and policy.”

The damage he causes could be expansive. “Kacsmaryk has also opposed reproductive rights,” Think Progress reported, “arguing against a Washington state law to require pharmacies to provide emergency contraception and fighting against the contraceptive mandate in the ACA. He said lawsuits fighting the mandate would ‘protect innocent life from conception to natural death.’”

At just 42 years old, this bigot could be on the bench for decades. “As we celebrate LGBT Pride Month and recognize the outstanding contributions LGBT people have made to our great Nation,” Trump said last month, “let us also stand in solidarity with the many LGBT people who live in dozens of countries worldwide that punish, imprison, or even execute individuals on the basis of their sexual orientation.” But LGBTQ people here in America? Tough luck.