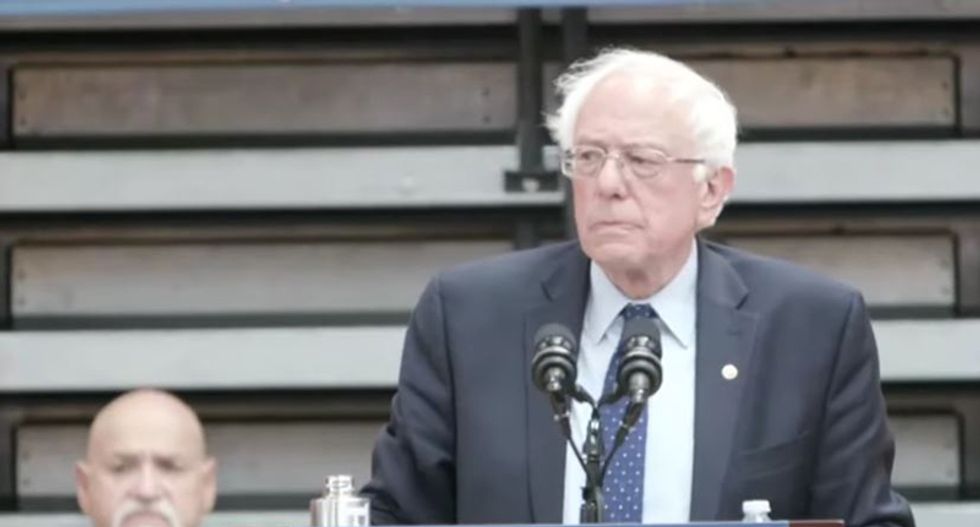 Inspired by Sen. Bernie Sanders's speech at the California Democratic Convention in California—in which the 2020 contender took a thinly veiled shot at fellow White House hopeful Joe Biden's centrist policy approach—progressives made the Twitter hashtag #NoMiddleGround go viral on Sunday in an effort to make clear that there can be no compromises when it comes to confronting the global climate crisis, providing healthcare to all as a right, and battling inequality.

"We have got to make it clear that when the future of the planet is at stake, there is no 'middle ground,'" Sanders said, in a clear reference to Biden's reported middle-of-the-road climate agenda. "We will take on the fossil fuel industry and transform our energy system."

The Vermont senator's remarks inspired a flood of tweets from his supporters and other progressives, who expressed enthusiastic agreement with Sanders's call for an uncompromising approach to the most pressing crises facing the United States and the planet.

The tweets from Sanders backers and others quickly made #NoMiddleGround a trending Twitter topic in the U.S.

Sanders's remarks demanding an unabashedly bold progressive agenda were also applauded at the California Democratic Party Convention in San Francisco, where the Vermont senator received a standing ovation while calls for moderation by Colorado Gov. John Hickenlooper and former Rep. John Delaney were panned by many in the crowd.

Biden, who is currently the Democratic frontrunner according to most national polls, did not attend the California convention.

"In my view, we will not defeat Donald Trump unless we bring excitement and energy into the campaign, and unless we give millions of working people and young people a reason to vote, and a reason to believe that politics is relevant to their lives," Sanders told the San Francisco audience. "We cannot go back to the old ways, we have got to go forward with a new and progressive agenda."