Catholic bishop digs in after homophobic tweet goes viral: I have to 'teach the faith' about gay pride 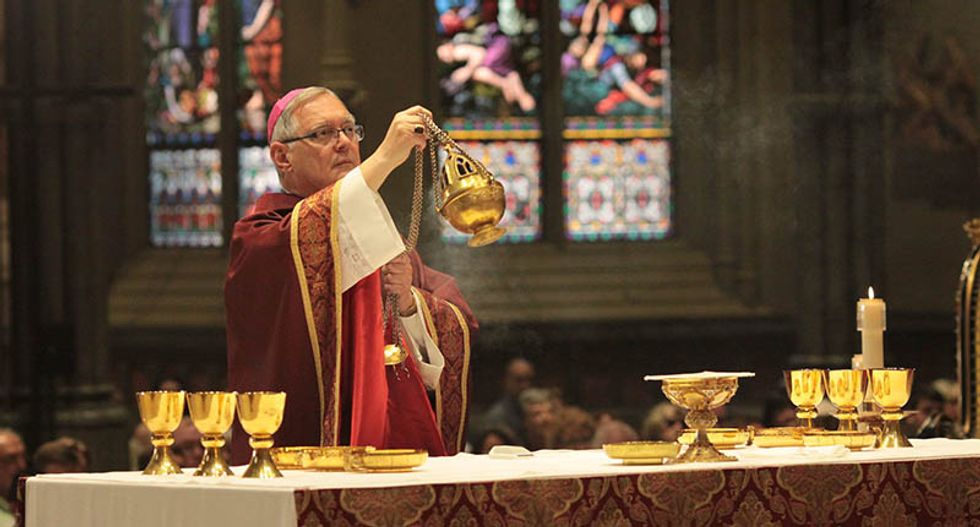 Providence, Rhode Island Bishop Thomas Tobin found himself under fire this weekend after he posted an extremely homophobic tweet warning his fellow Catholics about LGBTQ Pride month and falsely claiming that gay pride and gay "culture" "are especially harmful for children."

The tweet went viral, but Bishop Tobin got "ratioed," meaning his remarks were so offensive the number of people who took time to comment outweighed the likes and retweets exponentially.

Mia Farrow and many others made this one fact clear:

The outrage was so intense Tobin's tweet made news, and he responded to the anger and pain he caused – by trying to appear as if he was apologizing, but then doubling down.

Bishop Tobin said it "was not my intention" to offend, but "my obligation before God is...to teach the faith."

Tobin also said he understands why many "have taken offense," but he also appreciates "the widespread support" he has received.

He also referred to gay people as "Individuals with same-sex attraction," which many find offensive.

I regret that my comments yesterday about Pride Month have turned out to be so controversial in our community, and offensive to some, especially the gay community. That certainly was not my intention, but I understand why a good number of individuals have taken offense. I also acknowledge and appreciate the widespread support I have received on this matter.

The Catholic Church has respect and love for members of the gay community, as do I. Individuals with same-sex attraction are beloved children of God and our brothers and sisters.

As a Catholic Bishop, however, my obligation before God is to lead the faithful entrusted to my care and to teach the faith, clearly and compassionately, even on very difficult and sensitive issues.  That is what I have always tried to do - on a variety of issues - and I will continue doing so as contemporary issues arise.

As the gay community gathers for a rally this evening, I hope that the event will be a safe, positive and productive experience for all. As they gather I will be praying for a rebirth of mutual understanding and respect in our very diverse community.