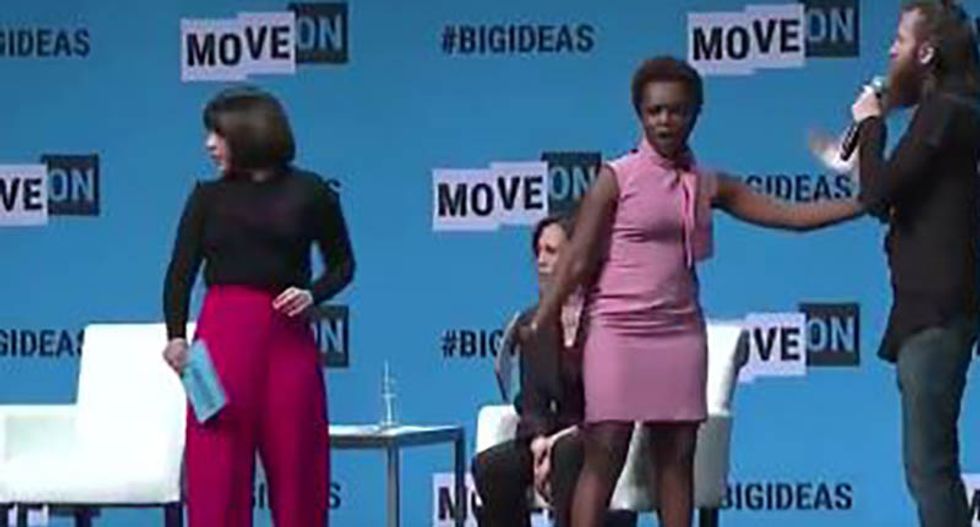 Sen. Kamala Harris, D-Calif., had her microphone briefly taken away from her by an animal rights activist during a political event in San Francisco.

The activist, Aidan Cook, approached Harris while she was seated with a panel at a liberal event hosted by the advocacy group and political action committee MoveOn on Saturday, according to The Washington Post. Cook was quickly restrained and escorted out of the building while Harris calmly stood to the side and waited for the incident to pass.

According to Direct Action Everywhere, the animal rights group which identified Cook as the person who grabbed Harris' microphone away from her, Cook acted as he did "to support ordinary citizens rescuing animals rather than the factory farms that abuse animals, sicken local populations and repress whistleblowing activity."

"The activists say the candidates’ continued support of animal agriculture — despite increasing evidence of the public health threats, environmental damage, and animal cruelty in the industry — goes against their stated values," Direct Action Everywhere said in a press statement. "For example, the 2018 Farm Bill, which received near-unanimous Democratic Party support (including Sanders, Booker, and Warren), approved over $100 billion in corporate subsidies and rejected activist requests to prevent handouts to millionaires and billionaires."

The press statement describes Direct Action Eveywhere as a group whose investigators will "enter farms, slaughterhouses, and other agricultural facilities to document abuses and rescue sick and injured animals. DxE’s investigatory work has been featured in The New York Times, ABC Nightline, and a viral Glenn Greenwald exposé, and DxE activists led the 2018 effort to ban fur products in San Francisco."

Harris' candidacy has been marked by controversy due to her background as a San Francisco prosecutor. This includes her opposition to criminal justice reform measures supported by the left, her late arrival toward support of marijuana legalization and her opposition in 2014 to a federal judge in Orange County ruling that the death penalty was unconstitutional. She also opposed a bill that required her office to investigate shootings involving police officers and did not support statewide laws that would effectively regulate how police officers wear body cameras.