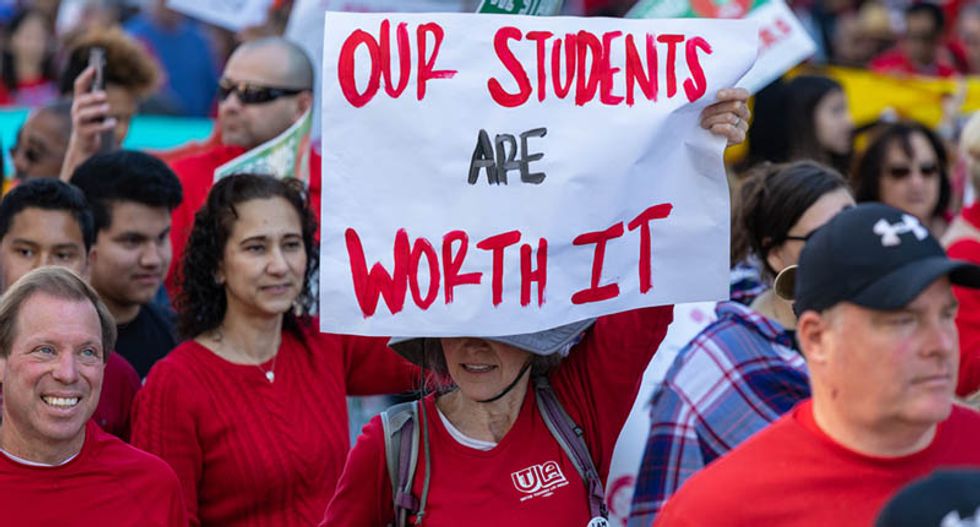 In a move that was widely viewed as an attempt to exact revenge for last year's mass walkouts, the West Virginia state Senate on Monday passed a sweeping education bill containing a Republican amendment that would ban teacher strikes.

"Already, we don't have collective bargaining. It's a right-to-work state," Albert told Politico ahead of the bill's passage. "This is just I think another stab at trying to punish us, making the law perhaps a little more severe with such language."

The legislation now heads to West Virginia's House of Delegates, which is set to reconvene later this month.

The GOP amendment, according to the Gazette-Mail, would "specify that public worker strikes are unlawful, that school workers can be fired if they strike, that school employees' pay can be withheld on strike days, and that county superintendents can't close schools in anticipation of a strike or to help a strike."

Republican state Sen. Charles Trump, the sponsor of the amendment, described the provision as "a codification of what is the current law of West Virginia."

In addition to walkouts over pay and benefits last year that shut down every school in the state, West Virginia teachers also went on strike earlier this year to protest Republican privatization efforts.

"This is how the GOP retaliates against the people who educate our children," Wong wrote of the anti-strike provision.

This is how the GOP retaliates against the people who educate our children. Absolutely disgusting. https://t.co/xFKn1JeP4Y
— Fred (@Fred) 1559582410.0

Others echoed Wong's outrage, noting that the state Republican Party's efforts to stop strikes are evidence of their effectiveness.

"If strikes weren't effective, they wouldn't be doing this," tweeted activist Jordan Uhl. "All workers need to recognize the power they have when they unify and stand together."