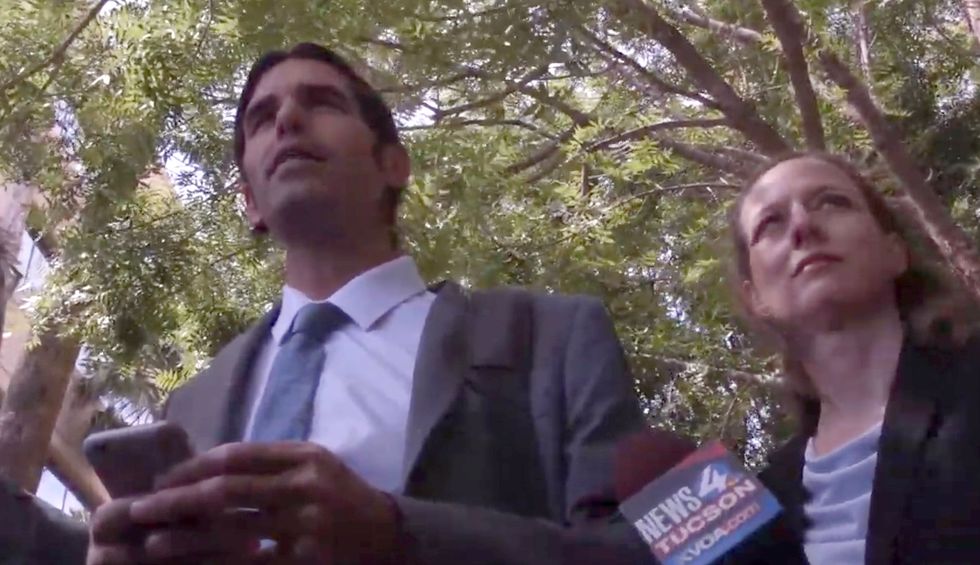 An activist who was put on trial for providing water and humanitarian aid to migrants in the American Southwest desert was acquitted Tuesday by a hung jury.

Scott Warren, a 36 year-old from Ajo, Arizona, who is a professor of geography at Arizona State University, worked with the humanitarian organization No More Deaths for years to save lives at the southern border. Those efforts, as Common Dreams reported, resulted in one felony count of conspiracy to transport undocumented immigrants and two felony counts of harboring undocumented immigrants.

Warren's trial saw the jury in his case return to the courtroom deadlocked at eight to four in favor of acquittal. The judge in the case set a hearing to proceed on the status of the case for July 2.

The result, No More Deaths said on Twitter, shows that "there are Arizonans standing their ground for justice and kindness in a historic moment."

In a statement read to reporters on Tuesday, Warren said that the lethal environment at the southern border continues to kill people.

"Since my arrest in January 2018, at least 88 bodies were recovered from the Ajo corridor of the Arizona desert," said Warren. "We know that's a minimum number and that many more are out there and have not been found."

Warren was arrested on January 17, 2018, just hours after No More Deaths publishedvideo evidence of Border Patrol agents destroying water jugs left for migrants. According to The Intercept's Ryan Devereaux, the Border Patrol set up a sting operation outside of one of the facilities used by No More Deaths hours after the report was made public. That's where they found Warren and two undocumented young men, José Sacaria-Goday and Kristian Perez-Villanueva.

Governments are targeting humanitarian workers assisting migrants across the world. In Italy, a German boat captain named Pia Klemp faces up to 20 years for aiding at least 1,000 immigrants in the Mediterranean. Common Dreams reported on Klemp's legal struggles on Tuesday.

The New York Times, in its analysis of the jury's deadlocked decision, presented the two versions of Warren's actions from the defense and the prosecution:

Key to the case was Mr. Warren's intent: Was he wholly motivated by a humanitarian purpose when he gave food, water, shelter and clean clothes to the two men from Central America? Or was he illegally concealing the men when he allowed them to remain at the volunteer group's camp?

Ultimately, the jury could not decide which story to believe, rendering a de facto verdict of innocence, according to Warren's lawyer, Gregory Kuykendall.

"Scott Warren remains innocent, both as a legal matter and as a factual matter, because the jury could not unanimously conclude otherwise," Kuykendall told reporters.

In his comments to the media on Tuesday, Warren took pains to point out that the two men arrested with him, Sacaria-Goday and Perez-Villanueva, had not "received the attention and outpouring of support that I have."

"I do not know how they are doing now," said Warren, "but I desperately hope that they are safe."

Watch Warren's comments to reporters after the mistrial: