'You don't recall?': Barr can't say whether he's spoken with White House about Mueller's DOJ referrals — but emphatically refuses to recuse himself from them 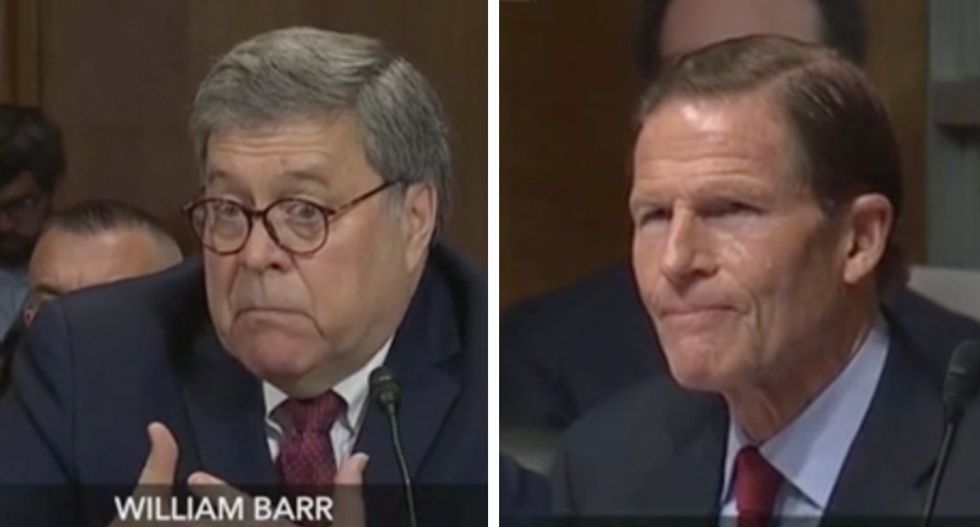 Barr’s refusal came during questioning by Sen. Richard Blumenthal (D-CT) about Barr’s 4-page summary of the Mueller report, as well as the press conference the attorney general delivered prior to the release of the redacted report.

“You ignored in that press conference and in the summary that Robert Mueller found substantial evidence, and it’s in the report, and we have a chart that shows the element of that crime Intent, interference with an ongoing investigation, and the obstructive act,” Blumenthal said. “So I think that your credibility is undermined within the department, in this committee, and with the American people."

“I want to ask you whether on those remaining investigations, the 12 to 14 investigations, whether you have had any communication with anyone in the White House,” Blumenthal began.

“No,” Barr replied, but as Blumenthal began to ask if Barr would offer an “ironclad commitment” not to discuss the investigations, the attorney general cut in.

“I’m not sure of the laundry list of investigations, but I certainly haven’t talked the substance or been directed to do anything on any of the cases,” Barr said.

“Well, let me give you an opportunity to clarify,” Blumenthal replied. “Have you had any conversations with anyone in the White House about those ongoing investigations that were spawned or spun off by—“

“I don’t recall having any substantive discussion on the investigations,” Barr said.

“Have you had any non-substantive discussion?” Blumenthal pressed.

“It’s possible a name of a case was mentioned,” Barr admitted.

“And have you provided information about any of those ongoing investigations?” Blumenthal asked. “Any information whatsoever?

“Is there anything that would refresh your recollection?” The senator asked.

As Barr insisted he would need to look over a list of those cases, Blumenthal responded, “you don’t know what those investigations are?”

“I do generally, but I can’t remember each—“ Barr began, before Blumenthal interjected.

“Let me ask you one last time,” Blumenthal said. “You can’t recall whether you have discussed those cases with anyone in the White House, including the president of the United States?”

“My recollection is I have not discussed those,” Barr replied.

“But you don’t know for sure,” Blumenthal noted. “Will you recuse yourself from those investigations?”