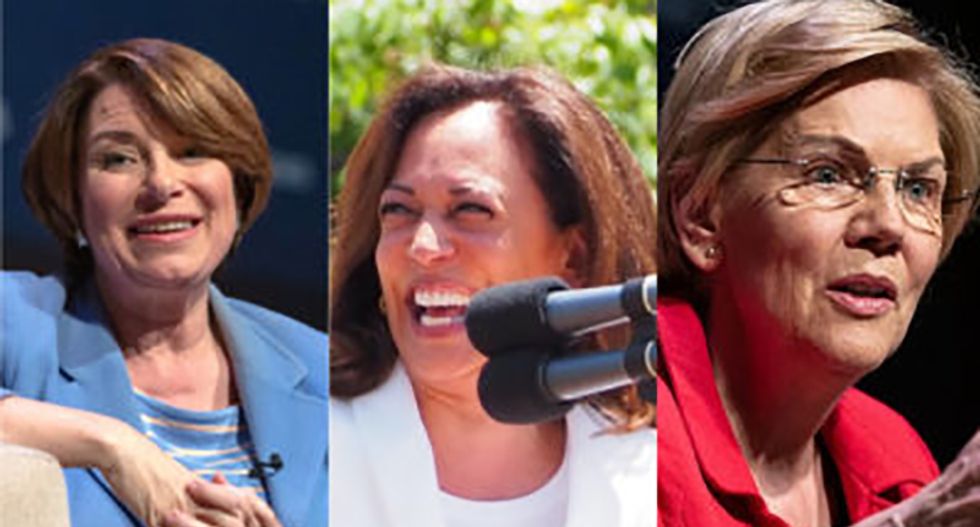 Lorie Shaull/U.S. Sen. Kamala Harris speaks at L.A.'s Families Belong Together March by lukeharold is licensed under CC CC0 1.0 / Rally at US Sen 0196 Senator Elizabeth Warren" by mdfriendofhillary is licensed under CC BY-SA 2.0
Sophia A. McClennen
and
Salon
May 24, 2019 Election '20

Everything about the presidency of Donald Trump has defied logic. He made it to the top of the Republican ticket with no experience in government or the military. Then he was elected despite a slew of controversies and scandals on the campaign trail, the likes of which would have destroyed any other candidate.

Once Trump was in office, there was an ongoing assumption that he couldn’t possibly stay in office. Surely his combination of hubris, narcissism and ineptitude would catch up with him. He would make some mistake, abuse power or cross some constitutional line and get impeached. Yet, despite the fact that there were plenty of early signs that he was doing exactly that, and despite the fact that the Mueller report offers much evidence, there is little realistic chance that he’s leaving office before his term is up.

That sets all anti-Trump eyes on the 2020 election, where, once again, the assumption is that there is no way he can win. Surely, by now, voters have come to their senses. But a new report by the Democracy Fund’s Voter Study Group shows that support for Trump remains remarkably stable two years into his term. Their data shows that just 15 percent of Americans have changed their view of him at some point in the last two years. More importantly, overall Trump support remains steady: 44 percent in 2016 compared to 40 percent today. That means that not one story about abusive immigration policies, not one more Trump team indictment and not one more outrageous Trump scandal has had any major impact on voter perceptions. Not one late-night Trump tweet or bombastic insult or abuse of power has had the kind of resonance that can undermine his support. As the study puts it, “sentiments towards President Trump seem remarkably stable given the often tumultuous nature of his time in office.”

There’s more. Their study shows growing optimism among voters about the future direction of the country. “Americans today are now more likely to say that the country is on the right track (22 percent in 2016 vs. 35 percent in 2019), that the economy is getting better (24 percent vs. 33 percent), and that their family is better off financially than it was a year ago (17 percent vs. 24 percent).” As expected, those numbers skew sharply along partisan lines, with Republicans accounting for the uptick and Democrats largely taking a dimmer view of the future. Republicans shifted substantially, with 20 percent in 2016 vs. 68 percent in 2019 saying the country is headed in the right direction.

The benefits of this study are that the Voter Study Group have charted voter perceptions since 2011, thus tracking shifts over time. What the survey finds, for example, is that voter priorities heading into 2020 are largely the same as they were in 2016. It also shows that there are stark partisan divisions over the issues that matter to voters. They note that the largest partisan divide is over climate change, with 73 percent of Democrats saying it is "very important," and just 12 percent of Republicans agreeing.

Perhaps even more significant, the survey shows that respondents care more about the policy positions of presidential candidates than their demographic characteristics or social identities.  These findings are significant in an election cycle where there has been much chatter over whether the Democratic nominee should be a woman and/or a person of color.  Democrats polled were far more concerned that the next president advocate for racial and ethnic minorities (91 percent) than that he or she is a person of color (30 percent).

These findings offer important takeaways heading into the 2020 elections. First, candidates won’t win on a purely anti-Trump platform. This message might be relevant, for example, to Joe Biden, who has hit that note hard early in his campaign. Biden's anti-Trump message of “unity,” this data suggests, is not likely to energize voters. Second, the 2020 race will be driven by policy platforms rather than personalities. Democratic candidates who are soft on policy and who have a difficult time distinguishing how their policy will offer measurable change will not fare well. And third, the news media’s tendency to devote an extraordinary amount of time to Trump will likely disadvantage Democratic candidates who will likely see their coverage bumped by the latest Trump outrage. The news media’s habit of obsessing over Trump — fueled by the undeniable appetite of the public — helped him win in 2016 and may well do so again in 2020.

Even more important, anti-Trumpers need to recognize that their ongoing obsession with painting the president in a negative light has no real measurable impact on voter perceptions. Recall that much of Hillary Clinton's 2016 campaign focused on the assumption that she was simply a better choice than Trump. The Clinton camp painted Trump as immoral and ill-equipped to lead the nation. Clearly, it didn't work, and that sort of anti-Trump tactic will fail yet again.

The study does show some wiggle room on voters. Trump has lost appeal among the famous Obama-to-Trump voters, who have shifted from an 85 percent favorable view of Trump in 2018 to 66 percent today. This group constitutes the only one that has had any real shift in its views of Trump. That could be significant since, according to the study authors, this group is “disproportionately white, non-college educated and, as a result, are likely to be well distributed geographically for the purpose of electoral impact.”

Heading into 2020, another critical component for turnout will be voter enthusiasm. The Voter Study Group, along with a number of other research studies, shows an increase in negativity and partisan animosity among all voters. This finding is especially cautionary for Democrats since in the Trump era the Republican platform of anger and fear has risen to entirely new levels, with highly successful effects.

Democrats, however, can’t win on a corollary fear-based vote. Instead, as George Lakoff explains, they need to frame their message effectively and in keeping with progressive values. Thus far, they have failed to frame their policy within a compelling narrative. “Democrats don’t know how people think,” Lakoff explains.  He further explains that Republicans have been far more effective at telling the story about why they should be elected.