‘We’re in a free-fall out here’: Ohio farmer who voted for the president in 2016 explains why he's 'off the Trump train' 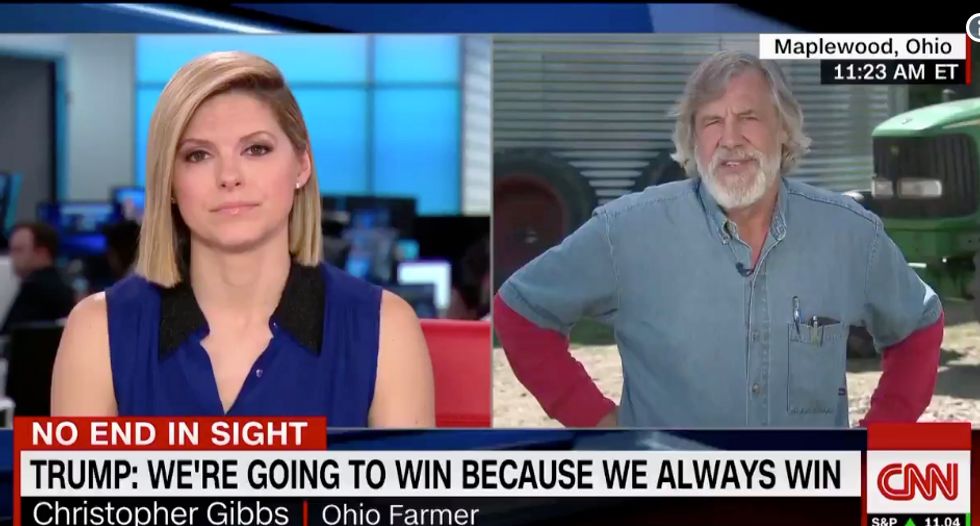 In order for President Donald Trump to be reelected in 2020, he will need a great deal of support in rural areas of the United States—and that includes farmers. But Ohio farmer Christopher Gibbs, who voted for Trump in 2016, expressed disillusionment with the president in a May 15 interview with CNN.

Trump recently described farmers as “great patriots” who are going to be “well taken care of.” But Gibbs stressed that the tariffs Trump has favored aren’t hurting China or Mexico—they are hurting farmers in the U.S.

“We’re in a free-fall out here in agriculture,” Gibbs told CNN. “We’ve seen 30% decrease in prices of soybeans, and this isn’t all about soybeans.”

Gibbs added, “With the geopolitical turmoil that the president has thrown into the mix over the last year, the markets just don’t have anywhere to go. So they’re just sitting and hiding….. We’re hurting.”

Gibbs explained that in 2016, he appreciated Trump’s “can-do” attitude. But he “got off the Trump train” after Trump’s summit with Russian President Vladimir Putin in July 2018.

“I’m off the Trump train,” Gibbs stressed, adding, “I’ve got to protect my business.”

Trump’s description of farmers as patriots, Gibbs asserted, is “just a design to make me continue to be quiet, and I’m not going to be quiet. Being a patriot is this: I’ve got to protect my family.”