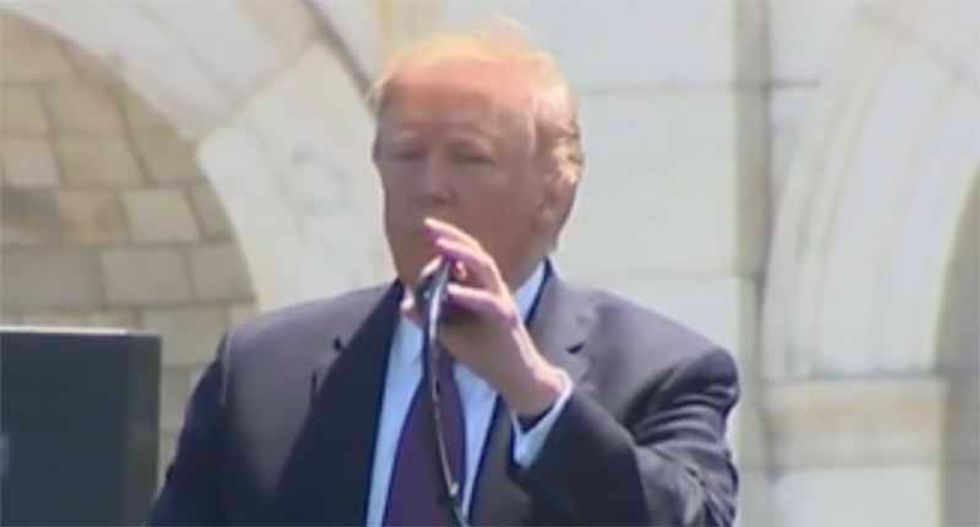 Image via Screengrab.
Travis Gettys
and
Raw Story
May 15, 2019 Video

President Donald Trump veered off into a rant against immigrants during a speech on Peace Officers Memorial Day.

The president invited the family of slain California police officer Ronil Singh, who was killed Dec. 26 by an undocumented migrant during a suspected drunken driving stop, to make a few remarks during his speech, and then he began talking again.

“So was he as great as they say?” Trump said, and the crowd politely applauded. “He was, he was. I had a feeling you might say that. He was, that’s what I hear from everybody.”

Then he started complaining about immigration laws in a campaign rally-style speech.

“Tremendous problems occurs at the southern border,” the president said, “from drugs to the wrong people to being allowed to come in because of a corrupt and broken system that can be changed in 20 minutes — 20 minutes, if they want to change it. In the meantime we have to do it the tough way, there is no reason for that. That is why we are calling on Congress to fix our terrible immigration laws.”

“Stop catch-and-release,” he continued. “You catch them and you release them. That doesn’t work too well with all these great officers I’m looking at. They never heard of a thing like that. To end deadly sanctuary cities. To stop the Visa lottery program where they take lottery systems and a country will put you into a lottery and then, deposit you into the United States. I don’t think most countries are giving us their finest, do you agree? And that is what’s happening. That is causing tremendous problems with crime and other things.”

He praised Immigration and Customs Enforcement and Border Patrol, and offered a grim description of their duties.

“Each time they went on a shift, they knew it could be their very last,” he said. “When that time came where they knew there was danger, when evil lurked, they did not run, they did not hide. They always ran forward, they answered the call. They gave their lives for all of us.”

“The men and women of law enforcement devote their lives to protecting our children, securing our streets and keeping our communities safe,” he continued. “Moms and dads can sleep soundly at night, kids can play with neighbors outside and grandparents can feel at peace in their homes because they know America’s officers are the absolute best and they are always on the beat. The courage and sacrifice of our heroes is the reason our flag stands tall and bravely. Our hearts beat with pride and our country remains one people, one family and one nation under God.”