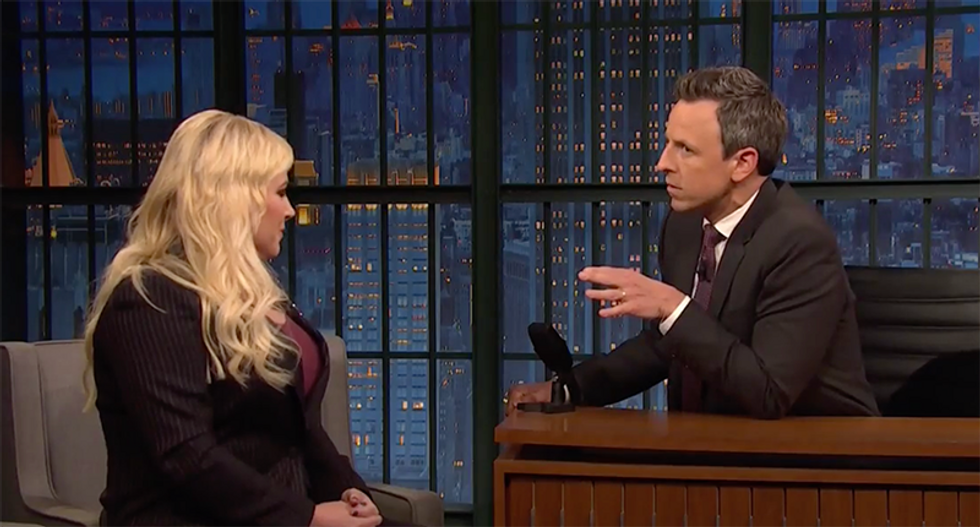 Image via Screengrab.
Travis Gettys
and
Raw Story
May 08, 2019 Video

NBC’s Seth Meyers grilled a squirming Meghan McCain over her ongoing attacks on Rep. Ilhan Omar (D-MN) — and the “View” co-host didn’t like it.

McCain linked Omar’s remarks to the Chabad of Poway synagogue shooting in San Diego, during an appearance on “This Week with George Stephanopoulos,” and Meyers called out her comments as irresponsible given the violent threats faced by the Muslim congresswoman.

“You keep bringing up the two tweet that she’s apologized for, and I think that’s a little unfair to her,” Meyers said. “Especially because we’ve established –

McCain bristled: “Are you her publicist?”

“Are you her press person?” McCain shot back.

“No,” Meyers said, “I’m just someone who cares about the fact that there’s someone out there who in a minority, had death threats against her, and I think we should all use the same language that you’re asking her to be careful about her language, and I would ask everybody else to be careful about theirs.”

McCain found herself at a loss for words.

“Okay,” she stammered, as the crowd cheered. “All right. I’m not sure what, what would make you happy coming out of my mouth right now? I’m really curious.”