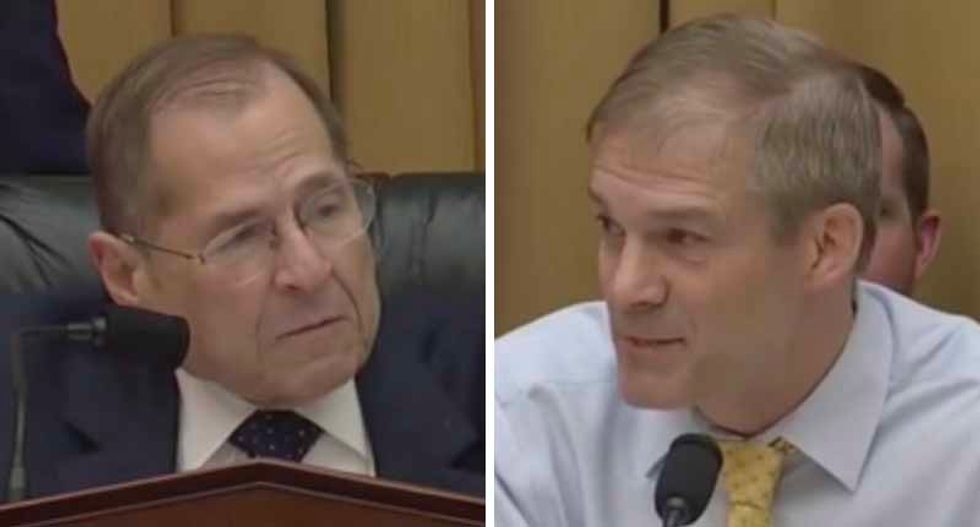 Image via Screengrab.
Eric Dolan
and
Raw Story
May 08, 2019 Video

Republican Rep. Jim Jordan (OH) on Wednesday lashed out at Democrats, claiming that their attempts to obtain an unredacted copy of special counsel Robert Mueller’s report was just a ploy to undermine President Donald Trump’s administration.

During a House Judiciary Committee hearing on whether to hold Attorney General Bill Barr in contempt for refusing to release the materials, Jordan alleged that Mueller’s investigators were biased against Trump.

House Judiciary chairman Jerry Nadler (D-NY), however, noted that the House of Representatives overwhelmingly approved a non-binding resolution calling for Mueller’s full report to be released to Congress and the public. Every House lawmaker voted in favor the resolution, except for Republican Reps. Justin Amash, Matt Gaetz, Paul Gosar and Thomas Massie — who voted present.

“To his credit, Mr. Jordan has been second to none in asking for access to the material that we’re asking for… is he still supporting his own request for the committee and the Congress to be given access to the entire report and the information?” Nadler wondered.

“Consistent with the law,” Jordan shot back, “and I would ask the chairman — my understanding is Mr. Mueller will be here next week. We’re all going to ask him questions. Why don’t you hold off on this contempt until the man who spent 22 months and $35 million with a bunch of Democrat lawyers putting it together, why don’t you wait and ask him next week before we do this contempt resolution?

“Essentially, because it would be useful to read the material before we have him in front of us,” Nadler explained.