Watch: Elizabeth Warren schools Mitch McConnell on the Constitution by reading directly from Mueller report on the Senate floor 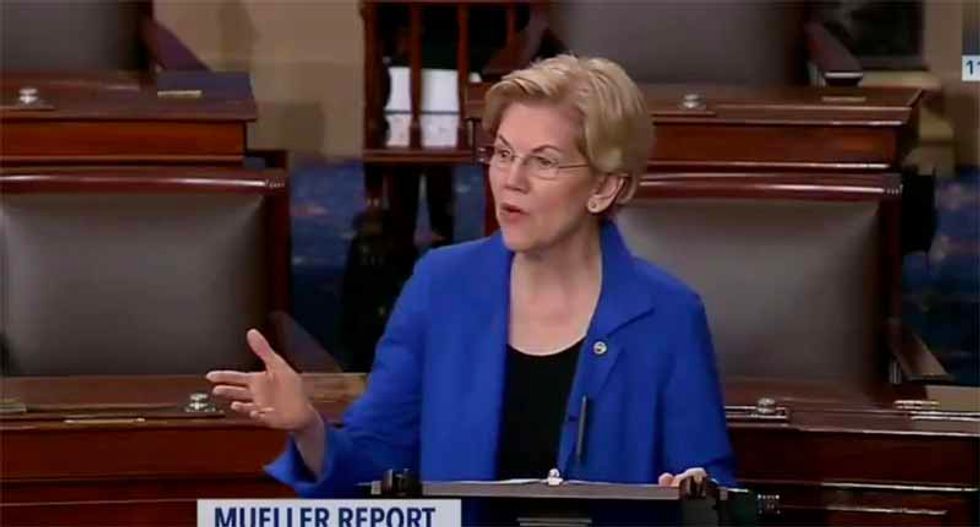 Image via Screengrab.
Brad Reed
and
Raw Story
May 07, 2019Video

Sen. Elizabeth Warren (D-MA) on Tuesday brought down the hammer on Senate Majority Leader Mitch McConnell (R-KY), who insisted that there was no longer any need to investigate whether President Donald Trump illegally obstructed special counsel Robert Mueller’s investigation.

During her speech on the Senate floor, Warren cited the separation of powers granted to Congress under the United States Constitution, and she accused McConnell of completely abdicating his duty as a senator by circling the wagons to protect the president.

She then turned her attention to Trump and argued that letting him off the hook for potentially obstructing justice would essentially make him impervious to the rule of law.

“If any other human being in this country had done what’s documented in Mueller report, they’d be arrested, and put in jail,” she said. “The Majority Leader doesn’t want us to consider mountain of evidence against the president. That is wrong.”

Warren then proceeded to read directly from the Mueller report.

.@SenWarren: "Our Constitution is built on separation of powers, precisely to prevent a dictator from taking contro… https://t.co/9f90ggOQWC
— Aaron Rupar (@Aaron Rupar) 1557244655