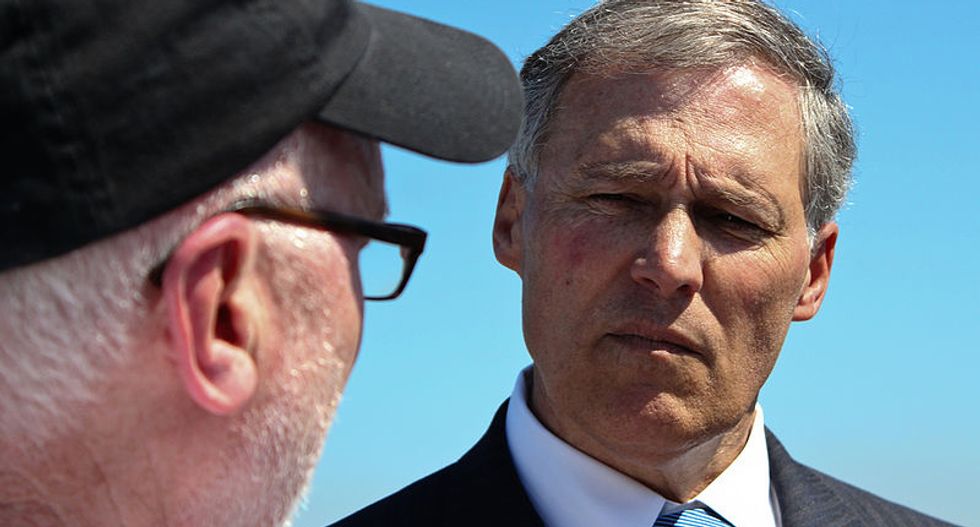 As Bernie Sanders calls for a national ban on fracking due to the serious threat it poses to the climate, air quality, and water supply, Washington Governor and 2020 presidential candidate Jay Inslee won praise from environmental groups on Wednesday for signing into law a statewide ban on the destructive drilling practice.

Wenonah Hauter, executive director of Food & Water Watch, celebrated Inslee's move — which made Washington the fourth U.S. state to ban fracking — but urged him to join fellow 2020 contenders Sanders and Tulsi Gabbard in calling for a nationwide ban on the extractive technique.

"A clear majority of Americans want political leaders to take real action on climate change," Hauter said in a statement. "Now would be the perfect opportunity for Inslee to join fellow candidates Bernie Sanders and Tulsi Gabbard in calling for a national ban on fracking, and for a halt to all new fossil fuel infrastructure everywhere."

"We're pleased that Governor Inslee has banned fracking in Washington," added Hauter. "This is great news, but as a presidential candidate, in order to show real national leadership on climate and clean energy, Inslee must endorse a ban on fracking across the country."

In a tweet on Tuesday, Sanders highlighted fracking's poisonous impact on air and water quality as well as its contribution to the climate crisis before declaring, "We need to ban it nationwide."

A national ban on fracking is one plank of Sanders' sweeping climate agenda, which also calls for a Green New Deal, an end to oil exports, and a moratorium on all new fossil fuel infrastructure projects.

Sanders and Inslee in recent days have both issued calls for a presidential debate focused specifically on the climate crisis.

As Common Dreams reported last month, Inslee was the first 2020 candidate to call for a climate-focused debate.

"Each 2020 nominee needs to have a concrete plan to address climate change—and we deserve to hear those plans," Inslee wrote in an email to supporters.

When Sanders was asked by youth activists if he supports a climate debate during his campaign stop in Iowa over the weekend, the senator answered in the affirmative.

"The answer is yes," Sanders said. "There are very few issues more important than the survival of our planet."