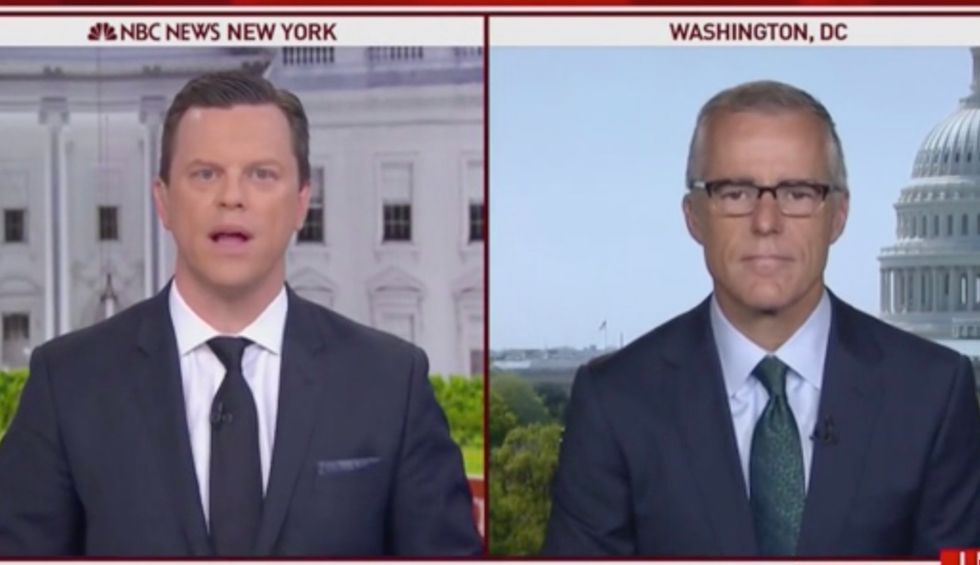 On Wednesday, May 29, special counsel Robert Mueller finally broke his silence when he publicly spoke for ten minutes in Washington, D.C. about his investigation of Russian interference in the 2016 election— and Former Acting FBI Director Andrew McCabe weighed in on Mueller’s speech during a Thursday morning appearance on MSNBC’s “Morning Joe.”

McCabe asserted that Mueller’s statement on Wednesday underscores his belief that Attorney General William Barr has been “misrepresenting” the special counsel’s final report for the Russia investigation, which the attorney general publicly released in redacted form. Mueller, McCabe stressed, “would not have come out and made this statement yesterday” if he “wasn’t concerned about the way the results of his team had been misrepresented by the AG’s original comments.”

Former Acting FBI Director Andrew McCabe on @Morning_Joe: “Mueller would not have come out and made this statement… https://t.co/50Ct3k1gMg
— Michael Del Moro (@Michael Del Moro)1559216749.0

McCabe told MSNBC contributor Mike Barnacle and others on “Morning Joe” that the last thing Mueller wanted to do was engage in a “tit for tat with the attorney general.” Nonetheless, McCabe stressed, Mueller was compelled to speak out publicly.

McCabe told “Morning Joe” that what he watched on Wednesday was “vintage Bob Mueller. This was Bob Mueller delivering exactly what he thought, without adornment, without extra words — short, to the point, delivering his message and then stepping away, as he hopes, from the microphones permanently.”

In Congress, McCabe stressed, “There is obviously more investigating to do…. The crime here, Mike, is that almost three years after (the 2016) election, we are still talking about the politics of this issue. We have yet to take a significant step to insure that the Russians aren’t successful in attacking our democracy again.”

McCabe also noted that while Mueller did not believe the 2016 Trump campaign’s interactions with Russians reached the level of a full-fledged criminal conspiracy, “inappropriate contacts” clearly took place. And Mueller’s report, McCabe said, should be characterized as “no witch hunt, no exoneration” — not the total vindication that President Donald Trump has been claiming it is.