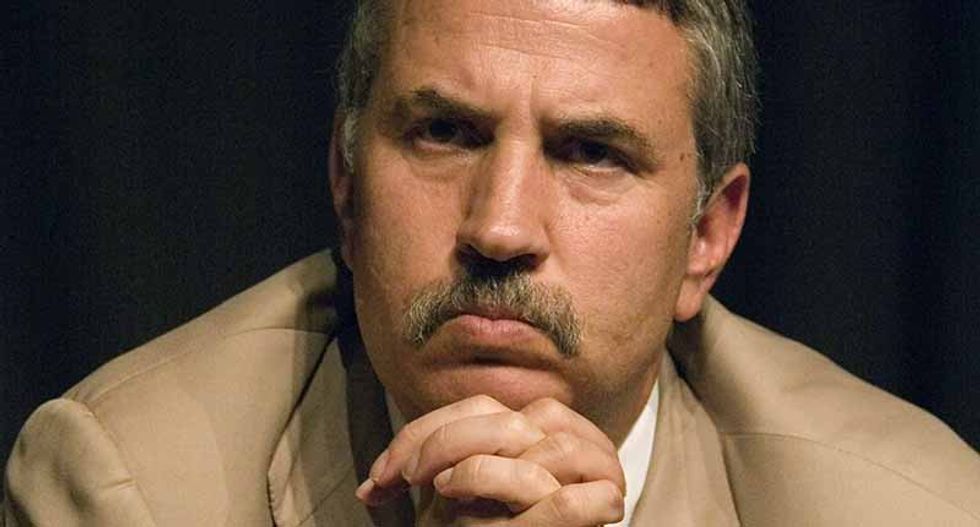 Many articles have focused on the ways in which Democrats could defeat President Donald Trump in the 2020 election. But veteran New York Times writer Thomas L. Friedman, in a column published this week, stressed that preventing Trump from achieving a second term will need to be a bipartisan effort — and that anti-Trump Republicans will need to be heard from in a major way.

Friedman asserts that Trumpism has advanced considerably in the GOP because so many Republicans are what he describes as “bendable.” The columnist writes, “In so many cases, Donald Trump has been able to take people who came into his orbit and just bend them to his lying ways the way Uri Geller bent spoons. The latest is Attorney General William Barr, who, in only a few weeks, got bent into becoming Trump’s personal lawyer.”

Friedman adds that Sen. Lindsey Graham and Sen. Ted Cruz both went from being vocal Trump critics to becoming “fawning sycophants.” And in order to counter Trump’s influence on the GOP, Friedman recommends, the president must be challenged as aggressively as possible from the right in a Republican presidential primary. That challenger, Friedman writes, could run as a Republican with “libertarian” ideas and “oppose Trump for his tariffs, his piling up of the national debt, his opposition to immigration and his immorality. This could siphon off just enough Republican votes for Trump to lose close races in Wisconsin, Michigan, Ohio, Pennsylvania, Nevada and Florida.”

Friedman goes on to say that Step 2 in defeating Trump in 2020 will require “dutiful people” in the GOP explaining why they reached a point where they could no longer tolerate him, and he cites former Secretary of State Rex Tillerson, former Homeland Security Secretary Kirstjen Nielsen and former Defense Secretary James Mattis as some Republicans he wants to hear from.

The columnist wraps up his piece by saying that Step 3 in defeating Trump next year will involve “a Democratic candidate who can appeal not only to Democrats, but also, hold the independents, moderate Republicans and suburban women whose votes shifted the House to the Democrats in the 2018 midterm elections and whose support will be vital for any Democrat to win the presidency.”

“You also have to summon people with a message of unity and respect,” Friedman advises. “There are moderate Republicans and independents whose support is vital. It’s a tricky balance, and the Democrat who gets it wins.”