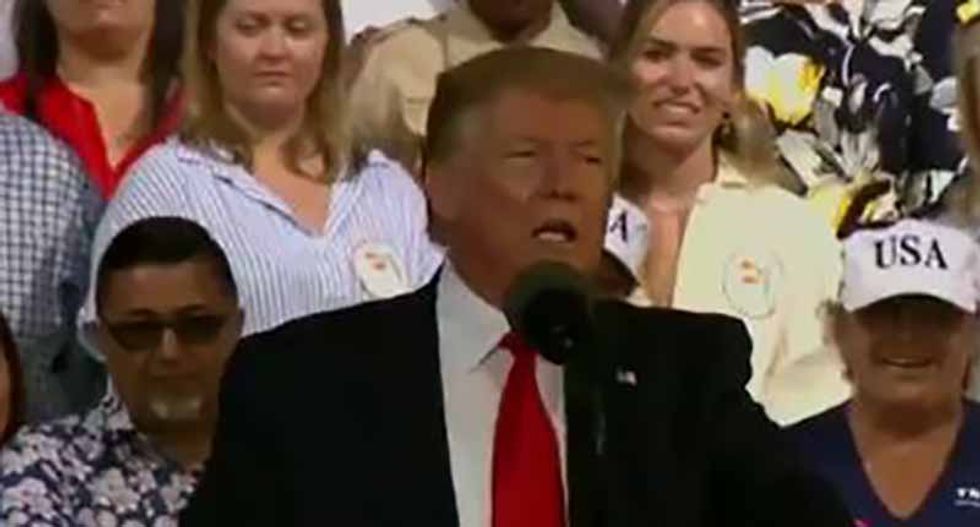 President Donald Trump spent the opening minutes of a campaign rally in Panama City Beach, Florida on Wednesday attacking hurricane-ravaged Puerto Rico for not sufficiently appreciating his administration's relief efforts—which critics have decried as grossly inadequate—and attempting to use a bar graph to bolster his repeatedly debunked claim that the island has received a record amount of storm aid.

"I brought a chart. Would you like to see a chart?" Trump said, pulling a piece of paper from his jacket pocket to cheers from the audience.

"That's Puerto Rico and they don't like me," said the president, pointing to a section of the bar graph purporting to show that Puerto Rico has received $91 billion in hurricane relief funding.

As The Associated Pressreported, Trump's "number is wrong, as is his assertion that the U.S. territory has set some record for federal disaster aid. Congress has so far distributed only about $11 billion for Puerto Rico, not $91 billion."

As Common Dreamsreported in March, over a million U.S. citizens in Puerto Rico have faced large cuts to food stamps and other services in the aftermath of Hurricane Maria as a relief package—which also includes disaster aid to Florida and other states—remains stalled in Congress due to opposition from Republicans and the Trump administration.

Even in the face of the island's devastating circumstances, Trump has reportedly said that he "doesn't want another single dollar" going to Puerto Rico.

In a statement following the president's rally, House Speaker Nancy Pelosi (D-Calif.) said Democrats are moving ahead this week with a $17.2 billion disaster relief package that includes aid to Puerto Rico.

"Sadly, Senate Republicans have been more committed to hurting our fellow Americans in Puerto Rico than healing communities everywhere," Pelosi said. "Meanwhile, the president has doubled down on Republicans' callousness, deliberately delaying assistance payments to Puerto Rico and inflicting more needless suffering on the Americans who are still reeling from his administration's disastrous response to the hurricanes."