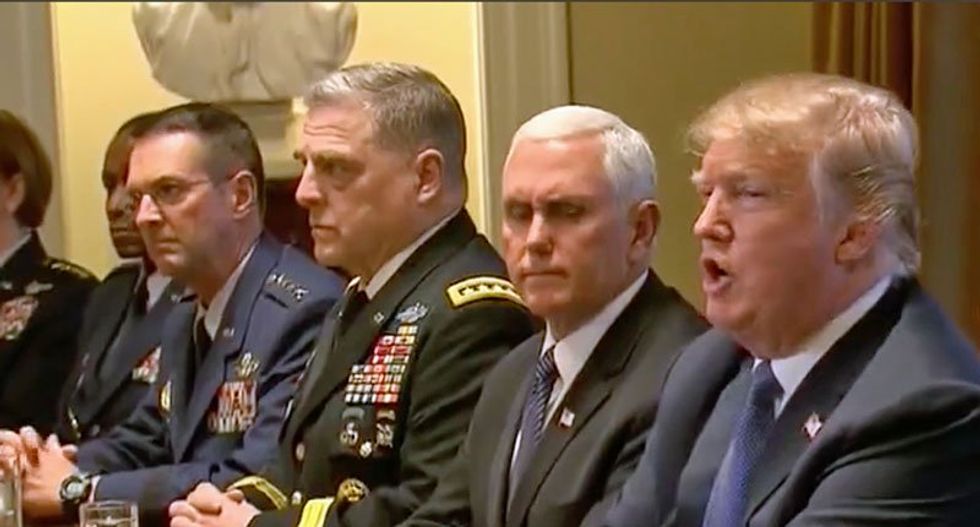 A British general threw a wrench into the Trump administration's narrative that Iran is plotting attacks on American troops in the Middle East by telling reporters gathered at the Pentagon Tuesday that "there's been no increased threat from Iranian-backed forces" in the region.

"We monitor them along with a whole range of others because that's the environment we're in," said Maj. Gen. Chris Ghika, speaking via video from Baghdad. "If the threat level seems to go up then we'll raise our force protection measures accordingly."

The public dispute came as anti-war voices and foreign policy analysts warned that the United States, led by Bolton, may be attempting to manufacture a false pretext to justify launching a war with Iran.

As Common Dreams reported on Tuesday, U.S. officials are—without any concrete evidence—attempting to blame Iran for attacks on oil tankers in the Strait of Hormuz over the weekend.

The effort to pin the tanker attacks on Iran came just over a week after Bolton used the planned deployment of an American aircraft carrier and bomber task force to the Persian Gulf to threaten Iran with military action and warn—again, without evidence—of "escalatory indications" from Iran.

According to the New York Times—which reported Monday that President Donald Trump has reviewed a Bolton-crafted plan to send 120,000 troops to the Middle East to threaten Iran—Trump administration officials are having a difficult time convincing America's European allies to join them on their march to war.

As the Times reported Tuesday:

Intelligence and military officials in Europe as well as in the United States said that over the past year, most aggressive moves have originated not in Tehran, but in Washington—where John R. Bolton, the national security adviser, has prodded President Trump into backing Iran into a corner.

One American official, speaking on the condition of anonymity to discuss confidential internal planning, said the new intelligence of an increased Iranian threat was "small stuff" and did not merit the military planning being driven by Mr. Bolton. The official also said the ultimate goal of the yearlong economic sanctions campaign by the Trump administration was to draw Iran into an armed conflict with the United States.

The anonymous American official's assessment aligns with that of foreign policy observers, who have urgently warned in recent days that the Trump administration is escalating tensions with Iran in an effort to provoke an attack and spark an all-out war.

"John Bolton is methodically setting the stage for war with Iran—forcing Iran into a corner and then readying war plans for when Iran takes the bait," Jamal Abdi, president of the National Iranian American Council, said in a statement on Monday.

Iran has thus far acted with restraint in the face of U.S. belligerence, urging diplomacy and attempting to restart negotiations with Europe over the terms of the Iran nuclear accord.

With tensions between the two nations reaching dangerous levels, U.S. Democratic presidential candidates have joined progressive anti-war groups in vowing to oppose the Trump administration's efforts to start a military conflict with Iran.

In a speech streamed online Tuesday night, Sen. Bernie Sanders (I-Vt.) said "a war with Iran would be an absolute disaster."

"The United States Congress must do everything it can," said Sanders, "to prevent the Trump administration's attempts to put us on the brink of a catastrophic and unconstitutional war with Iran that could lead to even more deaths than the Iraq War."

The United States Congress must do everything it can to prevent the Trump Administration’s attempts to put us on th… https://t.co/46tLfyX7kb
— Bernie Sanders (@Bernie Sanders)1557864443.0

Sen. Elizabeth Warren (D-Mass.) echoed Sanders in a tweet Tuesday night, announcing her decision to co-sponsor a bill aimed at stopping a war with Iran.

"We cannot let the Trump admin drag us into yet another war in the Middle East," Warren wrote. "This is exactly why the president doesn't have the constitutional authority to declare war. That's Congress's job—and that's why I'm supporting this legislation to prevent a war with Iran."