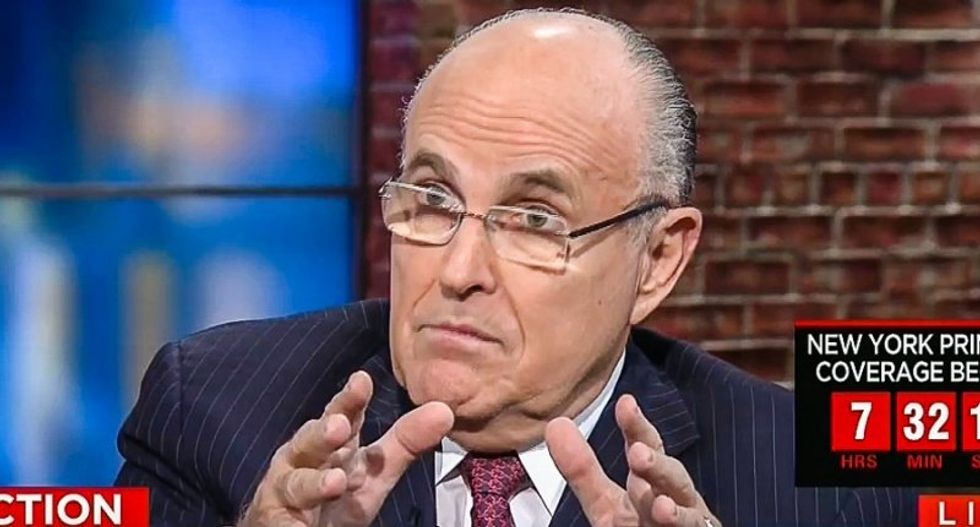 Image via CNN Screengrab.
Mark Sumner
and
Daily Kos
May 14, 2019

The Ukraine story that Rudy Giuliani has been pushing through the pages of The New York TImes and that Trump and his supporters have been trying to jump-start into a serious scandal is generating some genuine investigation over in Ukraine. But the results of that action aren’t exactly what Giuliani was shooting for, as a Ukrainian lawmaker has accused the top prosecutor at the heart of the story’s anti-Biden claims of simply “manufacturing a conspiracy.”

According to Bloomberg, all the noise Giuliani has been making has drawn attention to the story from Ukrainian officials. But what those officials have found is what was already known before the Times starting acting as a mouthpiece for Giuliani’s latest wild claims: There is no Biden scandal. But there certainly is a Giuliani scandal.

In 2016, then-Vice President Joe Biden went to Ukraine and spoke out against corruption, including calling for the resignation of a particularly notorious prosecutor. According to Giuliani, the reason Biden made this trip was to protect his son Hunter, who was on the board of holding company Burisma, owned by wealthy Ukrainian Mykola Zlochevsky. In the Rudy version, Biden wanted the prosecutor out because he was threatening Zlochevsky, and Zlochevsky was in turn threatening Hunter Biden’s fat board member salary. In reality, the prosecutor was not going after either Zlochevsky or Burisma. In fact, it was the prosecutor’s failure to cooperate with a U.K. case against Zlochevsky that caused Biden to demand his resignation. In other words, Giuliani isn’t just wrong; he has the story completely backwards.

If anything, Biden’s actions could have hurt Zlochevsky or Burisma by bringing in another prosecutor who would choose to conduct an investigation. Which is exactly what happened. Except that investigation found nothing wrong, and Zlochevsky was not charged.

A third prosecutor—the one visited in person by Giuliani—is at the heart of what looks to be a genuine corruption-based scandal. In which Giuliani is the source of the corruption. Giuliani not only made it clear that the U.S. wanted dirt on Biden, but he also connected the prosecutor directly with Donald Trump so that Trump could share his excitement over the idea of setting up Biden. Then the prosecutor drafted a letter to try to generate the scandal that Giuliani requested. Only now that letter itself is being shredded as a genuine hoax.

Legislator Serhiy Leshchenko has obtained portions of a letter he says was sent to Giuliani by Ukrainian Prosecutor General Yuriy Lutsenko. Leshchenko provided two pages to journalists that include claims that not only was Joe Biden protecting the income of his son, but that he personally received a payment while he was vice president in exchange for “lobbying activities and political support.”

However, Leshchenko says there is nothing to the claims, and that Lutsenko was simply trying to show Giuliani that he could be “useful,” in hopes that he could build contacts in the U.S. and hang onto his job in a new Ukrainian administration. The incoming Ukrainian president, Volodymyr Zelenskiy, who ran on an anti-corruption platform, has already promised to remove Giuliani’s friend Lutsenko.

The New York Times reported last week that Giuliani was planning another trip to Ukraine to put pressure on the new president and to explain to officials that they should “pursue inquiries into matters of interest to Trump, including an investigation into Biden’s involvement with Burisma.” Giuliani later delayed his trip, but his plan included some startling admissions. “We’re not meddling in an election, we’re meddling in an investigation, which we have a right to do,” said Trump’s personal attorney. “There's nothing illegal about it. Somebody could say it's improper.''

Everybody might say that. And other people might disagree with Giuliani’s assertion that using a foreign government to carry out state-sponsored prosecutions is “nothing illegal.”
Report typos and corrections to: feedback@alternet.org.