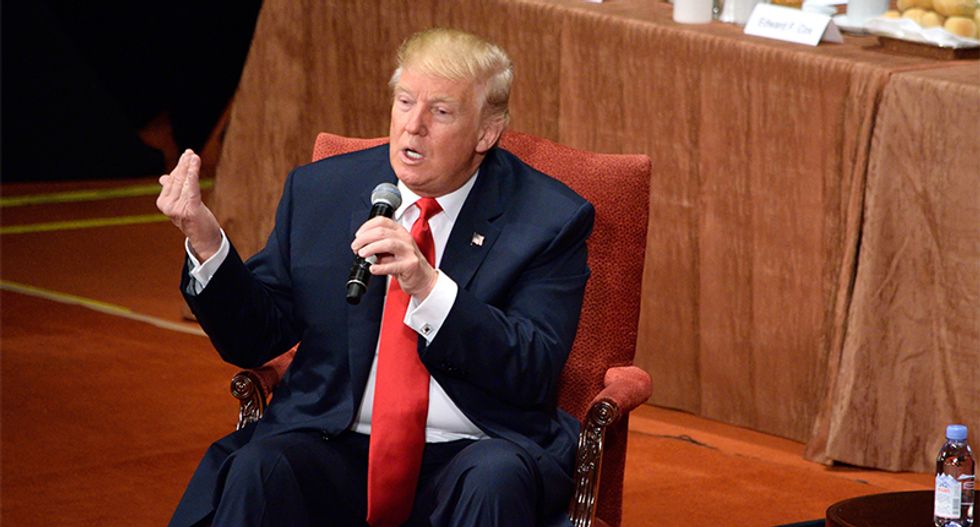 Image via Shutterstock.
News Corpse
and
Daily Kos
May 01, 2019

The risks posed by the unprecedented incompetence of Donald Trump are more apparent with each passing day. He has damaged our nation's relationships with decades-long allies, while cozying up to hostile enemies. He has maligned Americans in politics and the press as corrupt, dishonest, and even treasonous. His agenda is one of tearing down the accomplishments of his predecessors and replacing them with empty rhetoric or worse, policies that significantly harm the American people.

Trump was frighteningly unprepared for the presidency and he hasn't bothered to study up for the job since assuming it. One of the areas where Trump has the least amount of knowledge is the economy. He has repeatedly demonstrated that he would not allow his stupidity to get in the way of his boneheaded initiatives. His notion that we should ignore the numbers and "feel" the market is just as dumb as it sounds. And the tendency on his part to plow right ahead despite having no clue what he's doing was evident in his tweets Tuesday morning:

For starters, Trump should not be using China as a model for U.S. fiscal policy. China is a holy mess right now. And with regard to his claim that the Fed has "incessantly lifted interest rates," he is either lying or comatose. Rates currently stand at a historical low of 2.5 percent, and they have been there since last December. Nevertheless, Trump believes that Interest rates should be cut, something that isn't done if the economy is expected to be strong. That's when interests rates usually are hiked as a hedge against inflation, and a cushion in the event of a downturn or recession.

The Fed is currently in a holding pattern. That is generally an indication that they anticipate weakness going forward. To the extent that cutting rates would provide a boost to the economy, Trump is way off base. They might temporarily boost the stock market, but the stock market and the economy are two different things. Besides, the last thing we want is a market that "goes up like a rocket." That sort of volatility, more often than not, results in a crash landing.

Let's face it, the only thing Trump cares about is appearances. He wants a facade of economic strength going into the next election cycle. He admitted as much in his tweet with his ludicrous suggestion that lower rates would "make our National Debt start to look small." Setting aside the fact that that doesn't make any sense at all, it is also very different than having a national debt that actually is small.

It was Trump and his Republican Nationalist Party that shoved through a tax bill that added trillions to the debt while shifting the tax burden from corporations and the wealthy to working families and the poor. And Trump is still committed to addressing the new debt that he created by cutting programs like Medicare and Social Security. That's an agenda that is overwhelming opposed by broad majorities of the American people. Let's be sure that they find out about that before it's too late.