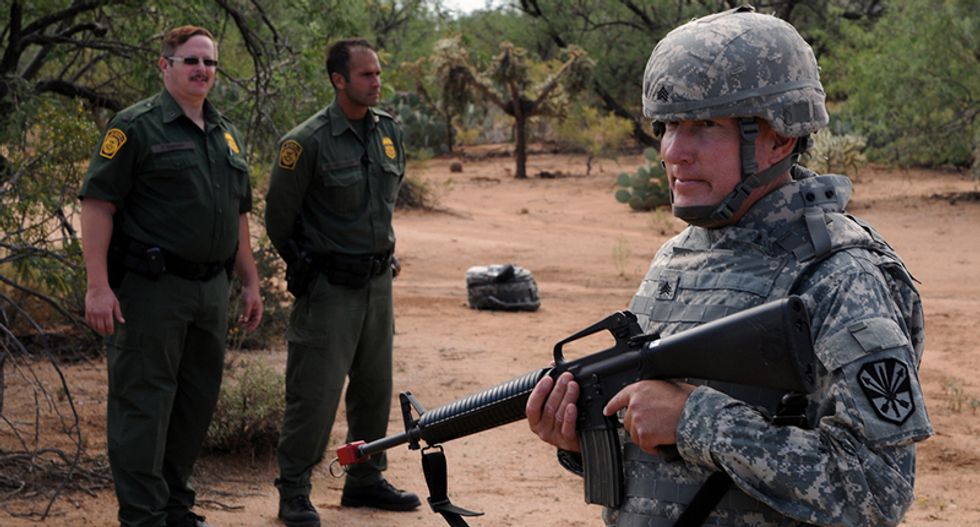 Border Patrol agents observe an Arizona National Guard Soldier training for Operation Copper Cactus at an undisclosed location in Arizona on Aug. 25, 2010. Operation Copper Condor is the Arizona National Guard's contribution to the up to 1,200 National Guard troops being deployed to support the Border Patrol and Immigration and Customs Enforcement in the four Southwest border states. (U.S. Army photo by Staff Sgt. Jim Greenhill) (Released)
Jessica Corbett
and
Common Dreams
May 31, 2019 Immigration

Immigrant and human rights advocates responded with alarm Thursday to a report that the Trump administration "is considering sweeping restrictions on asylum that would effectively block Central American migrants from entering the U.S.," condemning the proposed policy as both inhumane and unconstitutional.

"This latest policy is a disgusting example of the lengths the Trump administration will go to deny people protection," Charanya Krishnaswami of Amnesty International USA said in a statement. "To effectively close the border to Central Americans and the vast majority of people seeking asylum not only violates human rights obligations, but is also fundamentally cruel."

A draft proposal circulating among Trump's Homeland Security advisers would prohibit migrants from seeking asylum if they have transited through a country other than their own before coming to the U.S., according to a [Department of Homeland Security] official and an outside advocate familiar with the plan. If executed, it would deny asylum to thousands of migrants waiting just south of the border, many of whom have trekked a perilous journey through Mexico.

...While Trump aides believe they can make the changes through an administrative rule, they are also seeking a legislative fix that would be far less vulnerable to a court challenge. Similar language is expected to be included in Trump's new immigration bill that would boost security at the southern border and push the nation to admit more high-skilled, well-educated immigrants, rather than immigrants who enter the U.S. based on family ties, according to two people familiar with the proposal.

"It's unbelievably extreme to try to inhibit anyone who comes through another country in their quest for asylum," Kerri Talbot, the federal advocacy director for the group Immigration Hub, told Politico. "It basically means it would block all Central Americans from coming to the U.S."

The new rules would build on the administration's previous efforts to make it harder for migrants to seek asylum in the United States—including the so-called "Remain in Mexico" policy that created a "virtual wall" along the border by forcing asylum-seekers to stay in Mexico while their applications are processed by the U.S. government.

"Once again, the administration is seeking to slam the door on vulnerable people, in likely contravention of U.S. law and America's legacy of providing safe haven to the persecuted," Nazanin Ash of the International Rescue Committee (IRC) said in a statement. "The administration's policies have already kept thousands of vulnerable people waiting unnecessarily at the border for the chance to claim asylum—at great risk, hardship, and expense—only to now be told they won't even have the opportunity to have their claims heard."

Ash noted that an IRC survey from April of nearly 600 people residing in shelters at the border "demonstrated that children are at risk of kidnapping, gang recruitment, sexual abuse, and other physical violence." The survey results also indicated migrant women and girls are particularly at risk of sexual violence in Mexico.

Calling on Congress to "assert its authority" and prevent further suffering, Ash added, "the rules can't keep shifting when lives hang in the balance."

This proposal would not only impact Central American migrants but many asylum seekers from Haiti, Cuba, West Africa… https://t.co/BfmWoYs4pM
— Caitlin Dickson (@Caitlin Dickson) 1559233428