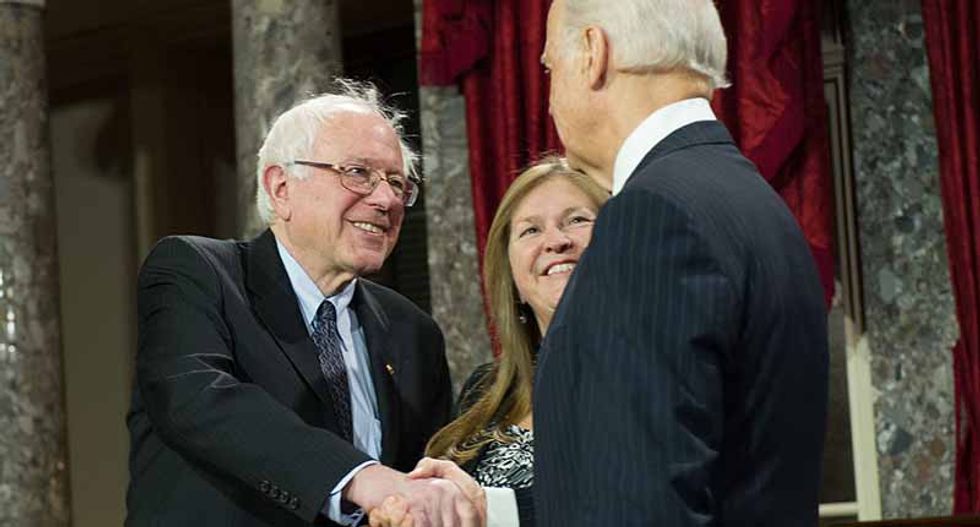 Image via US Senate / Wikimedia Commons.
Amanda Marcotte
and
Salon
May 28, 2019

Unsurprisingly, Donald Trump spent Memorial Day sending out petty tweets about former Vice President Joe Biden, who continues to hold the lead in Democratic presidential primary polls.  In his typical trolling fashion, Trump floated the offensive and preposterous argument that he would somehow perform better with black voters than Biden in the 2020 race.

Anyone associated with the 1994 Crime Bill will not have a chance of being elected. In particular, African American… https://t.co/ysMwWeyOtA
— Donald J. Trump (@Donald J. Trump) 1558996535.0

Many, many progressives on Twitter immediately gulped down Trump's bait, pointing out that Trump has been a blatant racist his entire life, was literally sued by the government for racial discrimination and called the neo-Nazis who organized a march for white supremacy in Charlottesville "fine people."

None of that is wrong, of course. Trump is a racist who actively encourages the rise of white nationalism, even as he fussily denies it when called out. But it's naive to imagine that Trump sincerely believes he can somehow win over black voters in 2020. The man is no one's idea of a genius, but he's not that stupid.

Instead, these tweets highlight what is almost certainly going to be Trump's main campaign strategy in 2020. He doesn't need or even want to gain new voters outside his rabid base of Fox News-addled racists. All he needs to do is convince would-be Democratic voters to stay home or, if they must vote, to throw their votes away on whatever charlatan runs on the Green Party ticket. It's the strategy that worked for him in 2016 against Hillary Clinton and, unfortunately, he's quite likely not wrong that it will be an effective strategy if he faces Biden, who is carting around a metric ton of baggage, as the Democratic nominee in 2020.

Trump, a cable news addict with more than a decade as a reality TV host under his belt, has figured out the dark secret of popularity contests: Winning isn't about being popular so much as it's about being less hated than the other guy.

There is no doubt that one reason Trump defeated Clinton is that a few million people who voted for Barack Obama in 2012 switched to Trump in 2016, mostly because they ate up Trump's racist demagoguery. But at least as impactful were the 4.4 million Obama voters who simply stayed home in 2016. If those folks had turned out for Clinton — or if the people who voted for Green candidate Jill Stein had sucked it up and voted for Clinton instead — then the United States would still be honoring the Paris accords and Mitch McConnell would still be coming up with excuses not to seat Merrick Garland on the Supreme Court.

What happened instead was that Republicans — with a big assist from Russian spies, then-FBI director James Comey and complicit media sources like the New York Times — convinced many Americans that Clinton was history's greatest monster because something something "her emails." But it was also because some of Clinton's past missteps — such as supporting the 1994 crime bill signed by her husband, now derided by progressives — were effectively used as wedge issues against her, convincing millions of Obama voters to stay home rather than vote for her.

(To be clear, voter suppression also played a major role, and likely will again in 2020, as Republicans have only stepped up efforts to make it hard to vote. But statistics suggest that accounts for, at most, a quarter of the votes lost to people sitting out the election.)

Trump's tweets are a blatant effort to make sure the same thing happens to Biden. And guess what: So far, it's working. A Google news search on Tuesday morning shows that by tweeting this, Trump was able to generate a hefty amount of news coverage highlighting Biden's role in passing the 1994 crime bill. Which, to be clear, was a terrible law that has come to stand in for the larger escalation of tough-on-crime approaches that resulted in the ongoing crisis of mass incarceration, which has had a disproportionately negative impact on black Americans.

Most of these news stories don't advance Trump's preposterous insinuation that he'll be able to win over any measurable percentage of black voters. But these stories do function to make sure readers are aware of the bill, the controversies surrounding it and the racist impact it had. There is no doubt that Trump and the Republican apparatus will continue to find ways to inject stories about the crime bill into the news cycle repeatedly, so that by November 2020, the issue will define who Biden is in the eyes of many potential voters, and convince many of them that it's better to stay home than back a guy they have come to dislike.

And no one should foolishly imagine that Trump's own lengthy history with sexual harassment will stop him from also harping on Biden's unfortunate role in the 1991 Clarence Thomas-Anita Hill hearings. If anything, the fact that Trump is a shameless hypocrite will garner more coverage for these attacks, making sure that Biden is defined by his '90s-era failures in the minds of even more would-be voters — at least some of whom will conclude "the hell with it" and stay home.

Trump doesn't care at all if liberals in the media or on Twitter think he's a loathsome hypocrite, and shower him with insults. He doesn't need their votes. He just needs them to be so turned off by the Democratic alternative that they don't bother voting at all.

This is also why the media narrative about Biden being the most "electable" candidate, out of the nearly two dozen people running for the Democratic nomination, is so devastatingly wrong-headed. Biden's entire past is littered with juicy opportunities for Republican apparatchiks to sow discord on the left and demobilize Democratic voters: The crime bill, the Anita Hill debacle, Biden's handsiness, Biden's '70s-era opposition to school desegregation, his initial rejection of Roe v. Wade, the bankruptcy bill.

Many liberals react to this by scolding journalists, telling them not to focus on the past and not to blow these stories out of proportion. Sometimes that's even a fair criticism. But it's a criticism that tends to backfire, since it makes the people who circle the wagons around Biden seem defensive and censorious, afraid to have an honest conversation about these difficult issues.  That much was evident in 2016, when defensiveness about some of Hillary Clinton's past missteps only ended up drawing more attention to the stories, most notably when Bill Clinton drew a lot of negative press by lashing out at Black Lives Matter activists who protested a campaign event for his wife in 2016.

Right now, a number of mainstream pundits have decided that Trump is "scared" of Biden. Chris Cillizza of CNN, ground zero for glib conventional wisdom in the dumber parts of the punditocracy, highlighted Trump's obsessive tweeting and retweeting attacks on Biden, suggesting this behavior "reeks of worry and anxiety." The same narrative is also being touted on MSNBC's "Morning Joe," where chronic wrongness never gets in the way of sounding really certain about the Beltway consensus on everything.

Is it possible Trump is worried about Biden as a foe? Sure. But it's more likely is that Trump is invested in securing the narrative that Biden is the presumptive nominee by treating him like one. Getting the word out that Trump is "scared" of Biden will only increase voter confidence that Biden is "electable," which can only help Biden drag all that voter-alienating baggage straight to the top of the ticket.

This is why, while it may be fun to dunk on Trump for his hypocrisy for attacking Biden on racism and sexism, it also doesn't really matter. All Trump wants is an election where a significant number of voters feel disillusioned or depressed about the Democratic nominee and can't quite bring themselves to vote for him, even when they know Trump is worse.

The best weapon that Democrats have is awareness: This kind of demobilization is Trump's prime and likely only campaign strategy. Guarding against it could mean better preparation ahead of time for these inevitable attacks. It could also mean letting go of unproven, baked-in assumptions about white men's superior "electability" and asking whether it might be better to nominate someone who has fewer flashpoints in their history and who won't break the Democratic coalition apart.