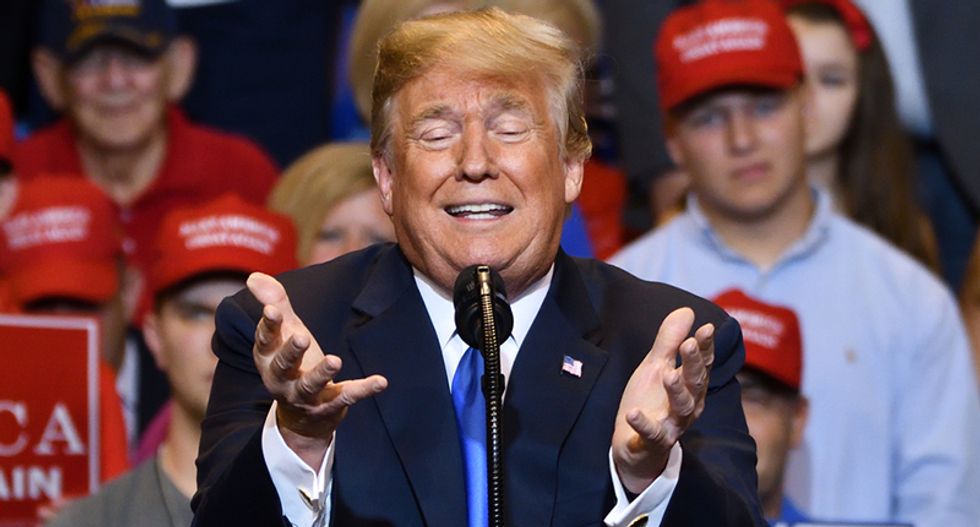 The House will vote Friday on a supplemental $17 billion disaster relief bill for communities still recovering from last year’s hurricanes, floods, wildfires, tornadoes, and other disasters, and the occupier of the Oval Office is telling his party to vote against it—because Puerto Rico is slated to get some of that money. In working to pass this bill, the House is trying to break a logjam in the Senate, where Trump's opposition to aid to Puerto Rico has stalled passage of a $14 billion disaster measure the House passed in January.

"House Republicans should not vote for the BAD DEMOCRAT Disaster Supplemental Bill," he tweeted Thursday night, and liked it so much that he retweeted it again hours later with a "Republicans must stick together!" added. He inexplicably says in the tweet that the bill "hurts our States, Farmers & Border Security. Up for vote tomorrow. We want to do much better than this. All sides keep working and send a good BILL for immediate signing!" Yes, billions of dollars going to help farmers will hurt them terribly, somehow.

It's about Puerto Rico, of course, which he railed against at an event at the White House Thursday that was supposed to have been about a bipartisan plan to combat surprise medical bills. The surprise was for all the doctors who showed up to hear Trump's grudgefest against the world. He lied again about how much money Puerto Rico has received since Hurricane Maria in 2017. "[W]e gave Puerto Rico $91 billion for the hurricane," he said. "That's the largest amount of money ever given to any state—talking about states and Puerto Rico; a little different—$91 billion." Five times he reiterated that lie.

In real life, of the $41 billion Congress has approved for Puerto Rico, just $13 billion has actually been sent. Republicans must know that, and they also must know that approving another disaster bill is not going to harm their states, their farmers, or border security. So they have a choice to make: vote with their constituents or with their president.