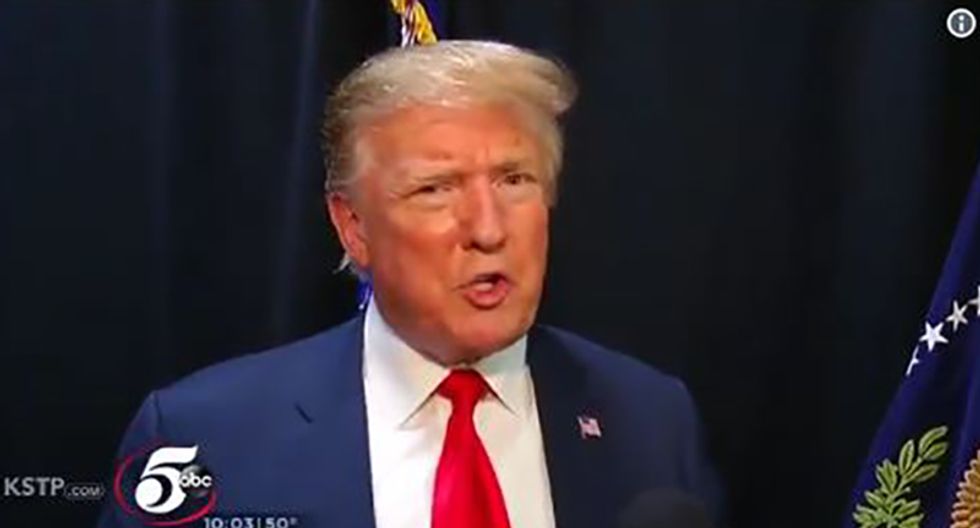 Image via Screengrab.
Brad Reed
and
Raw Story
May 06, 2019 Trump

President Donald Trump on Monday said Democrats need to stop talking about impeaching him — and then demanded that they launch investigations into themselves over their own purported “crimes.”

Reacting to comments about impeaching Trump made by Rep. Al Green (D-TX), the president insisted that House Democrats had no grounds to impeach him.

“You can’t impeach a president for creating the best economy in our country’s history,” the president wrote. “Also, there are “No High Crimes & Misdemeanors,” No Collusion, No Conspiracy, No Obstruction. ALL THE CRIMES ARE ON THE OTHER SIDE, and that’s what the Dems should be looking at, but they won’t.”

Even though Trump has claimed that special counsel Robert Mueller’s report on Russian interference was a “total exoneration,” he has nonetheless bitterly complained about it and he said over the weekend that Mueller should not be allowed to testify before Congress about his work.

And contrary to the president’s assertion that the report found “no obstruction,” it actually outlined multiple instances that it said could constitute obstruction of justice, including the president ordering his White House counsel to fire Mueller and the president trying to pressure former Attorney General Jeff Sessions to limit the scope of Mueller’s probe.