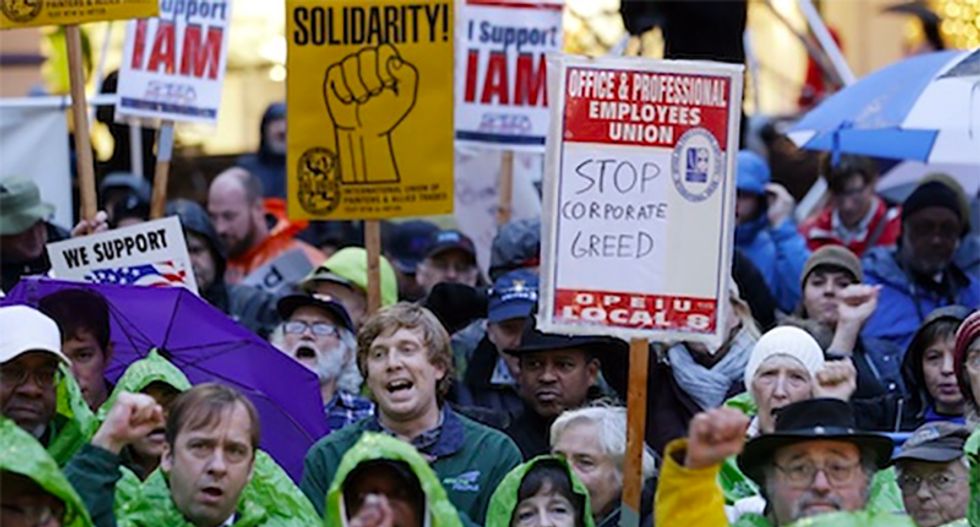 The Trump administration on Monday moved to change the definition of "poverty" in the United States in a proposal which combines the president's attempts to portray the U.S. economy as strong with his repeated attacks on the working poor and their access to government services.

In a regulatory filing, President Donald Trump's Office of Management and Budget (OMB) wrote that it may change how inflation is calculated in order to reduce the number of Americans who are living below the federally-recognized poverty line and are therefore eligible for certain government support services and social programs.

As Melissa Boteach, who oversees income security programs at the National Women's Law Center (NWLC), wrote on Twitter, the change "seems technical, but it's actually a big attack on working people."

Under the administration's proposal, which was first reported by Bloomberg News, the government would shift to a system known as "Chained CPI," which assumes consumers will change what they buy as items grow more expensive through inflation, suggesting that they are not struggling to afford necessities.

The definitional change would result in a slower inflation rate, which is used to determine how many Americans are eligible for programs like Medicaid, SNAP benefits, and other federal assistance.

As of 2018, a family of four making $25,900 per year was considered to be living in poverty, based on the necessities they could afford with the current inflation rate.

Under the new system, OMB officials wrote in the proposal, "changes to the poverty thresholds, including how they are updated for inflation over time, may affect eligibility for programs that use the poverty guidelines."

Boteach wrote that the proposal demonstrates "how out of touch Trump is with lives of working-class people," noting that even the current poverty line does little to reflect the amount of money an American family actually needs to live comfortably in the wealthiest country on the planet.

In fact, wrote Boteach, the new standards will make the government's understanding of poverty and inequality even less accurate.

This proposal shows how out of touch Trump is with lives of working-class ppl. “Americans on average report that i… https://t.co/5cd3m6x3ha
— Melissa Boteach (@Melissa Boteach) 1557188988.0

This is a cynical attempt to squeeze working-class people. Their incomes will STILL be too low to make ends meet, b… https://t.co/fUVYvAsdaJ
— Melissa Boteach (@Melissa Boteach) 1557189653.0

Some critics on social media denounced the proposal as Trump's latest "cruel" measure aimed at weakening the systems meant to support the poorest Americans and struggling working class families.

For the moment, Republicans have mostly stopped pretending to care about deficits. But they're still eager to cut a… https://t.co/J229uKMl1j
— Paul Krugman (@Paul Krugman) 1557232329.0

The OMB's proposal follows multiple attacks on social welfare programs by the Trump administration as it attempts to keep families from accessing SNAP benefits, commonly known as food stamps, and Medicaid. The administration and the Republican Party have pushed in 2018 to require people who use food stamps to work at least 20 hours per week, a move which would push at least one million Americans out of the program.

The federal budget proposal unveiled in March also included more than $1 trillion in cuts to Medicaid, threatening the healthcare of tens of millions of Americans.

The administration has spent much of the last two years insisting that the American economy is thriving—frequently pointing to the GDP, the stock market, and low unemployment rates as evidence.

But studies have shown that low unemployment numbers offer a misleading picture of how American families are actually coping in the economy, as the Bureau of Labor Statistics (BLS) does not count "600,000 'discouraged workers' who say they are no longer looking because they don’t think they can find a job," according to Quartz.

Critics have pointed out that 40 percent of families are unable to save enough moneyto pay for a $400 emergency; 137 million American households struggle to pay healthcare costs; and nearly 80 percent of workers live paycheck-to-paycheck—regardless of the GDP or the stock market.

The OMB's proposal, wrote Georgetown University and public policy researcher Joan Alker, is "a novel way to take healthcare, etc., away from people AND make it look like there are fewer poor people."