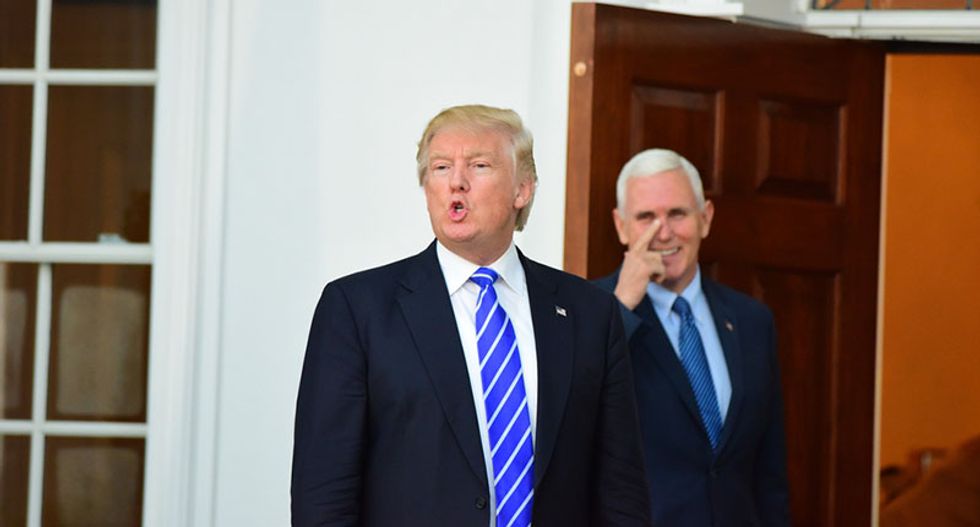 In response to a bombshell New York Times report detailing that President Donald Trump posted higher losses on his tax filings during certain years in the 1980s and 90s than perhaps "any other individual" in the country—more than a $1 billion over a decade—the president himself confirmed Wednesday morning that what he was really up to at the time was creating a massive "tax shelter"—something he said "was sport" that wealthy developers like him played with their tax returns and financial dealings.

While simultaneously calling the reporting "a highly inaccurate Fake News hit job," the president offered no evidence to refute the Times' story, which reporters Ross Buettner and Susanne Craig explain was based on pain-staking investigative work and a copy of a federal tax transcript of the president's tax returns spanning nearly a decade.

The data—printouts from Mr. Trump's official Internal Revenue Service tax transcripts, with the figures from his federal tax form, the 1040, for the years 1985 to 1994—represents the fullest and most detailed look to date at the president's taxes, information he has kept from public view. Though the information does not cover the tax years at the center of an escalating battle between the Trump administration and Congress, it traces the most tumultuous chapter in a long business career—an era of fevered acquisition and spectacular collapse.

The numbers show that in 1985, Mr. Trump reported losses of $46.1 million from his core businesses—largely casinos, hotels and retail space in apartment buildings. They continued to lose money every year, totaling $1.17 billion in losses for the decade.

As the advocacy group Stand Up America pointed out, other available evidence shows that Trump has elsewhere used his tax filings and declarations of losses to decrease future tax liability.

According to a separate piece authored by Buettner and Craig, one of the key takeaways from their investigation was that while during "multiple years, he appears to have lost more money than nearly any other individual taxpayer," Trump "paid no federal income taxes for eight of the 10 years" covered by the obtained tax transcript.

Meanwhile, as Trump defended as commonplace what he called the creation of a "tax shelter" for himself, other tax experts use a different name for it: tax dodging.

In response to the story, the hashtag #FakeBillionaire began trending overnight as political observers debated the impact the revelations may have.

As striking as the detailed looked at Trump's tax structure during those earlier years was for many readers, others noted that it also served to highlight—because the president has steadfastly refused to release his more recent and relevant tax returns—just how much remains unknown about how Trump conducted himself in the financial world since the mid-1990s.

This is an amazing story but for me the biggest takeaway is the massive amount we still don’t know about Trump’s fi… https://t.co/AhEJDP89aB
— Binyamin Appelbaum (@Binyamin Appelbaum) 1557277179

In a statement on Tuesday night to Huff Post, Rep. Bill Pascrell (D-N.J.), a member of the House Ways and Means Committee, which is actively seeking Trump's more recent tax returns, said the Times' investigation shows that the "entire tenure is built upon the most colossal fraud in American political history."

"As these records make clear, Trump was perhaps the worst businessman in the world. His entire campaign was a lie," Pascrell added. "He didn't pay taxes for years and lost over one billion dollars―how is that possible? How did he keep getting more money and where on earth was it all going? We need to know now."