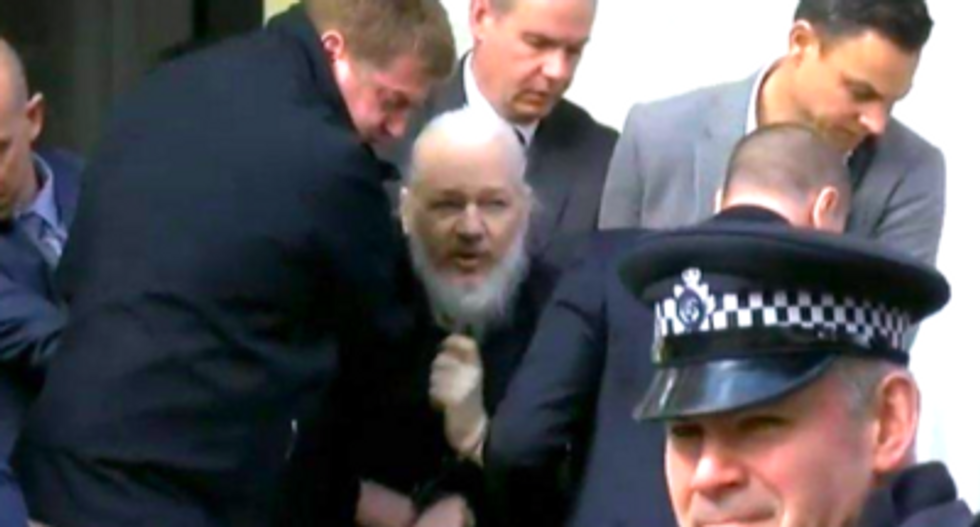 The political and journalism worlds reacted to the Trump administration's decision Thursday to charge Assange with 17 counts of violating the Espionage Act with concern for those celebrating the prosecution and dismay over those remaining silent on the issue.

Assange was indicted by a federal grand jury Thursday. The charges are seen by many proponents of press freedom on both the right and the left as part of an effort from the White House to criminalize dissent by journalism and to produce a chilling effect on reporters exposing classified documents that the government would prefer remain hidden.

Despite the unpopularity of the Trump administration among Democrats, however, at press time only three members of the party's congressional delegation has spoken up: Wyden, of Oregon; Warren, of Massachusetts; and Independent Sanders of Vermont.

In a statement, Wyden said that he was "extremely concerned about the precedent this may set and potential dangers to the work of journalists and the First Amendment."

"This is not about Julian Assange," said Wyden. "This is about the use of the Espionage Act to charge a recipient and publisher of classified information."

"Let me be clear: it is a disturbing attack on the First Amendment for the Trump administration to decide who is or is not a reporter for the purposes of a criminal prosecution," Sanders said in a tweet Friday. "Donald Trump must obey the Constitution, which protects the publication of news about our government."

Warren, in a statement sent to The Intercept, differentiated between Assange and the free press.

"Assange is a bad actor who has harmed U.S. national security — and he should be held accountable," said Warren. "But Trump should not be using this case as a pretext to wage war on the First Amendment and go after the free press who hold the powerful accountable everyday."

Critics of Assange have claimed that the Wikileaks founder is not a journalist, so his "crimes" are not applicable to journalists and journalism as a whole. But, as Knight First Amendment Institute staff attorney Carrie DeCell pointed out in a twitter thread, that's not the case.

"The government argues that Assange violated the Espionage Act by soliciting, obtaining, and then publishing classified information," DeCell tweeted. "That's exactly what good national security and investigative journalists do every day."

Further, as The Atlantic's Adam Serwer said in a series of tweets, anyone rejoicing over Assange's indictments is missing the forest for the trees.

"Some of you are so eager to punish Assange for helping Trump that you're willing to hand Trump a tool for prosecuting the reporters exposing his corruption," saidSerwer. "That's plainly idiotic."

"Please stop and think," Serwer added. "If publishing classified information is prosecutable, than any outlet that does so can be prosecuted."

Margaret Kimberley, "Freedom Rider" columnist for Black Agenda Report, pointed to a case in France where journalists are being called in for questioning for publishing classified materials as part of the same story.

"This will happen more and more in the wake of the persecution of Julian Assange," said Kimberley.

In a column at The Intercept, journalist James Risen put the indictment into context.

"If the government gets to decide what constitutes journalism," Risen wrote, "what's to stop it from making similar rulings about any outlet whose coverage it doesn't like?"

The Nation editor and publisher Katrina vanden Heuvel made the stakes clear in a tweet.

"Espionage charges against Assange are a threat to press freedom," said vanden Heuvel.

Assange also got support from The Washington Post's executive editor, Marty Baron. In a statement, Baron said that the Trump administration was making a jump from hostility to the press to criminalizing journalism.

"With this new indictment of Julian Assange," said Baron, "the government is advancing a legal argument that places such important work in jeopardy."

Baron was joined in his denunciation of the indictment by the editors of The New York Times and The Wall Street Journal.

Times executive editor Dean Baquet said in a statement the government was threatening a "basic tenet of press freedom."

"Obtaining and publishing information that the government would prefer to keep secret is vital to journalism and democracy," said Baquet. "The new indictment is a deeply troubling step toward giving the government greater control over what Americans are allowed to know."

While Wall Street Journal editor-in-chief Matt Murray wasn't inclined to discuss the specific details of the Assange case, he did, in a statement to the Daily Beast, decry "the deeply troubling implications for traditional journalism and freedom of the press in this country."

"The right to publish uncomfortable, important information that the government would prefer to be kept secret is central to a truly free press," said Murray.

In a statement, the Committee to Protect Journalists executive director Joel Simon said that the charges were "an attack on the First Amendment and a threat to all journalists everywhere who publish information that governments would like to keep secret."

"Press freedom in the United States and around the world is imperiled by this prosecution," Simon said.

It's unclear if the indictments will help or hurt the U.S. case for extradition. Assange is being held in U.K. jail awaiting a hearing—and, as The Intercept's Robert Mackey wrote in a column Friday, the charges may make it difficult for American officials to make a clear argument for Assange's transfer to the U.S.

The uproar could make it easier for Assange’s lawyers in the U.K. — where he is currently serving a 50-week jail term for violating bail — to argue that he is wanted in the United States primarily for embarrassing the Pentagon and State Department, by publishing true information obtained from a whistleblower, making the charges against him political in nature, rather than criminal.

However, as journalist Freke Vujst said on Twitter, that might be the plan—maybe the U.S. doesn't want to try Assange but instead wants to use his case to intimidate other journalists.

"Why did they not stick with its more limited first indictment?" wondered Vujst. "Could it be because US does not really want to put Assange before a US court of law?"