'There's no enthusiasm': New report finds Team Trump fears for 2020 as his fundraising is in 'crisis' 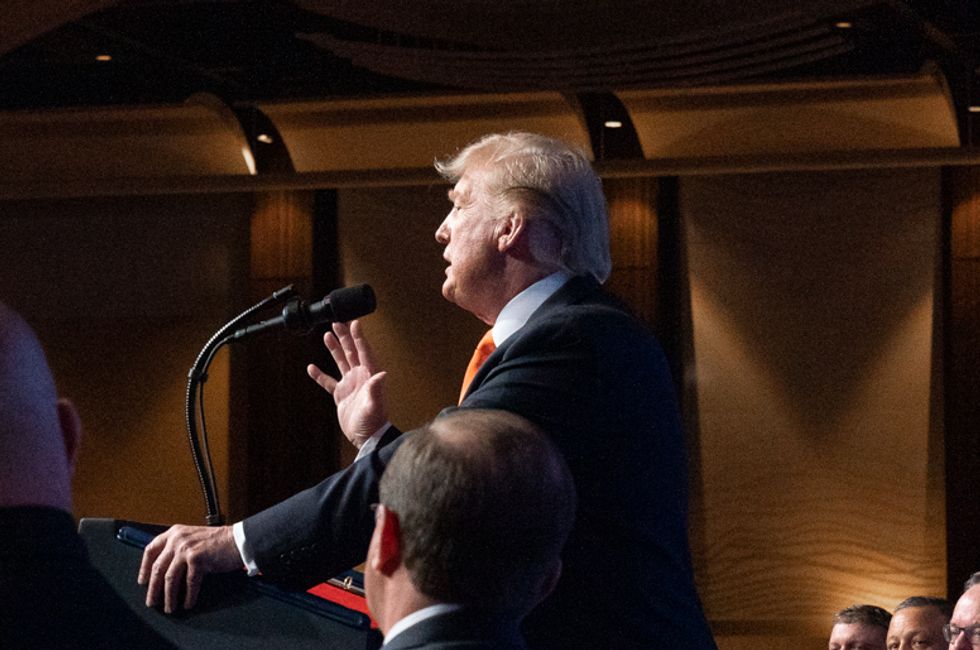 A new report from Vanity Fair's Gabriel Sherman on Wednesday night painted a dreary picture of President Donald Trump's re-election effort. It found that sources are saying the president's people are worried about his 2020 fundraising thus far, including Donald Trump Jr.

According to sources, Trump campaign officials are sounding the alarm over the president’s early fund-raising hauls. Trump’s son Don Jr. has privately warned donors that Trump only raised around $30 million in the last quarter, and pointed out that the number fell far short of the roughly $45 million Barack Obama raised in the second quarter of 2011 for his 2012 re-election bid, according to a source briefed on the conversations (A source close to Don Jr. disputed this). “They need more money, and there’s no enthusiasm. They need to amp it up,” a Trump donor told me. “Wall Street never liked Trump from the beginning. Goldman is filled with people who were Obama fund-raisers,” another Trump donor told me. In 2016, Trump raised only about $351 million. Mitt Romney’s 2012 campaign took in $483 million.

The piece stood in notable contrast to a separate article from the Associated Press's Zeke Miller, which cast the re-election effort as brimming with confidence:

Trump and his allies are exuding optimism about his 2020 bid, touting a strengthening economy, their organizational and fundraising head-start and a crowded Democratic primary poised to turn ugly. With the Mueller report completed and no GOP primary challenger gaining traction against Trump, many Republicans believe — and have started to act like — the president is the odds-on favorite to win a second term.

Trump will have a chance to showcase his growing assurance at a political rally in the Florida Panhandle on Wednesday night. The sentiment is a far cry from the 2016 campaign and the early days of the administration when some Republicans fretted that the chaos surrounding Trump would doom the GOP’s ability to hold onto the White House. And it’s emboldening Trump to become even more aggressive in pursuing his agenda, whether it’s slapping tariffs on China or stymieing the work of congressional investigators.

It's possible, of course, that both accounts are largely true. The campaign can be confident about Trump's chances while also worrying about fundraising numbers and urging supporters for more cash. More cynically, both stories could be part of an intentional public relations strategy — project outward confidence for the voters, but send signals to donors that the campaign is hanging on by a thread.

There are also signs in the Vanity Fair story that supporters of the president might be trying to send him a signal that he needs to do more for his donors. It could, in other words, be something of a threat:

Another problem is the dysfunction in Trump’s donor-outreach effort. Simply put, donors feel ignored. “There’s no follow-through,” said a donor who’s interacted with the campaign. “They don’t return favors,” another donor said. One former administration official said some donors are upset at the slow pace of confirming ambassadorships and political appointments. “Donors are not being taken care of,” the official said. “All these people were supposed to be ambassadors by now, but they’ve been slow-rolled. Trump is furious.”

But one of the parts of Sherman's account that rings most true was this: "According to a source, some donors aren’t stepping up because Trump’s numbers in must-win states like Pennsylvania, Michigan, and Wisconsin continue to disappoint."

As I argued previously, Trump's state-by-state numbers are far from enviable — particularly in Pennsylvania, Michigan and Wisconsin. While hardly decisive this far out, these numbers might be fueling strategic donors' reluctance to throw their weight behind someone who is more likely to be a loser than a winner.

Nevertheless, Trump goes into the general election with real advantages. 2020 Democrats will spend a year beating each other up, while the president looks unlikely to face a truly serious primary challenger. And as the sitting president, it may be easy for many voters to decide to give him another shot rather than try someone untested.