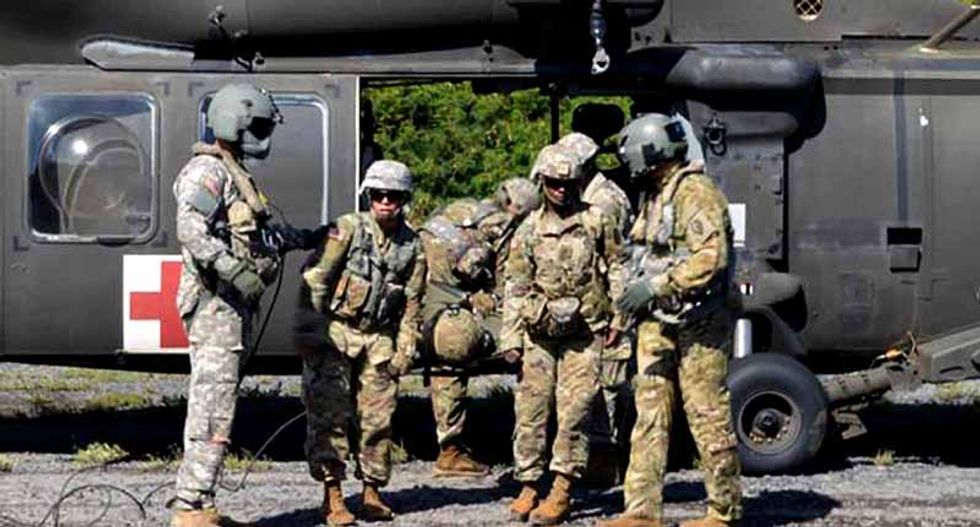 The 150 mph winds that Hurricane Michael blasted through Tyndall Air Force Base last October left a trail of destruction, ruin and exorbitant financial loss at one of the Department of Defense’s (DoD) key military bases. The damage could have been worse. Fifty-five of Tyndall’s fleet of F-22 fighter jets had been flown to safety before the hurricane hit. Nevertheless, some of the 17 remaining F-22 jets—their combined worth a reported $5.8 billion—suffered damage, along with roughly 95 percent of the buildings.

But it’s the fallout from these events at the airbase, along with the ensuing cleanup, that holds a mirror up to the complex set of forces confronting the military as it grapples with the global threat of anthropogenic climate change.

Plans to spend a reported $3 billion plus over five years to rebuild Tyndall will be drafted with a view to making the facility “sustainable” and climate “resilient.” These plans are in keeping with the findings of a DoD installation vulnerability report published early last year highlighting how more than half of some 3,500 military sites are affected by flooding, drought, winds, wildfires, storm surges and extreme temperatures—weather events and climate patterns that will worsen as global temperatures increase. The Pentagon’s latest climate change report focuses on the ways in which 79 operationally critical military installations are vulnerable to a warming planet. Indeed, a long list of reports and policy measures tip the hat to how seriously the DoD takes the impacts that global warming poses to its missions both at home and abroad.

And yet, critics argue that the gestalt of these efforts is inadequate given the enormity of the problem, especially when the DoD remains the single biggest institutional user of oil on the planet. Sustainability efforts at individual installations are too piecemeal, some critics say. Then there’s the matter of the DoD’s muted public comments about climate change under the Trump administration. Lawmakers criticized the military, for example, for failing to include in that most recent report mandated “key deliverables,” like an assessment of the top 10 military installations most vulnerable to climate change, as well as any mention of Marine Corps bases.

“In this administration, what we’ve seen so far is less like someone putting their foot on the brake, and more like someone taking their foot off the accelerator,” said John Conger, director of the Center for Climate and Security, which comprises a team of security and military experts.

As an example of the complex set of factors the military must consider as the planet warms, Conger has written about the possibility of closing Tyndall due to its location in a hurricane-prone area. More broadly, he describes the military’s climate change strategy as being “mission focused,” meaning that the various branches look at it as a “constraint on their ability” to do their job. “It is a lot less about emissions and carbon, and a lot more on impact and resilience.”

“This is a game-changer”

That said, there has been movement within the DoD to lessen its oil dependency. At the China Lake Naval Air Weapons station in the western Mojave Desert, for example, researchers are working on renewable diesels and jet biofuels that have the potential to significantly lessen the DoD’s fossil fuel footprint. “This is a game-changer,” said Marilyn Berlin Snell, a veteran investigative environmental reporter, about the biofuel research being conducted at China Lake.

In her new book, Unlikely Ally: How the Military Fights Climate Change and Protects the Environment, Snell reports that these high density, high-performance biofuels could improve the “range” of the military’s fleet of aircraft, ships and ground vehicles, all the while reducing greenhouse gas emissions by up to 70 percent. A future iteration of the facility’s research will be to adapt the beer-making fermentation process to create other biofuels. And while it’s “not the role of the DoD” to commercialize these biofuels, the military is working with private companies to do just that, Snell said. “It’ll take a long time,” she added, “but that’s the kind of innovative public-private effort we need.”

Snell also discusses the efforts made at a number of military bases in California to adopt green practices. Indeed, at the installation level, “many military strategists are really working hard to figure out how to mitigate climate change on their bases,” Snell told Truthout. At the Army National Training Center Fort Irwin in the arid Calico Mountains—“a god-awful rocky desert outpost,” as Snell describes it—water conservation measures have cut consumption by nearly 40 percent, and a new state-of-the-art water treatment facility has taken efficiency from 50 to 99.6 percent.

Efforts at the base level to adapt to climate change aren’t confined to California; take the Norfolk Naval Shipyard in Virginia, where its five dry docks are especially vulnerable to rising sea levels and worsening storms, according to an InsideClimate News series looking at the way climate change shapes national security and military readiness.

When Navy ships are secured within a sealed and emptied dry dock, their hulls are opened for repairs—a process that can leave exposed or vulnerable expensive electronics and mechanical systems, as well as the ships’ nuclear reactors. To mitigate the threats that storms and rising sea levels pose to these ships mid-repair, the Navy has reportedly erected temporary flood walls to protect the docks and has elevated equipment. The Navy also hopes to conduct more maintenance at the facility as part of a $21 billion, 20-year improvement plan.

“Unleash the full potential of renewables”

What about the military’s move toward renewables? “Some branches of the military have laid out pretty ambitious agendas for reducing their emissions, not for the sake of the planet, but in terms of saving money and having more resources for war,” said Miriam Pemberton, a research fellow at the Institute for Policy Studies, a progressive think tank, mirroring Conger’s assessment that the military is “mission focused.”

It was back in 2007 that President George W. Bush signed the National Defense Authorization Act committing the DoD to secure 25 percent of its energy used to power individual installations from renewable resources by 2025. In 2012, President Barack Obama upped the stakes once more, requiring three gigawatts of renewable energy—from things like solar, wind, biomass and geothermal—to be deployed on Army, Navy and Air Force installations by the same target date. Indeed, according to a report in Reuters, the military tripled between 2011 and 2015 its number of renewable energy projects.

At the same time, the military’s response to global warming is especially vulnerable to things like underfunding and lack of strategic planning. Another part of the problem, said Pemberton, is that the current White House is “doing whatever it can” to handcuff the government as it grapples with a warming world. In the first National Security Strategy released under the Trump administration, for example, there was no mention of the threat climate change poses to global security. Compare that to the 2015 National Security Strategy, released under the Obama White House, when climate change was described as an “urgent and growing” peril.

Impediments to the military’s broad climate change strategy also exist at the state level. In her book, Snell tells the story of Miramar Air Force Base, in San Diego, where work continues on a microgrid—what is essentially a localized energy system—built primarily upon renewable energy sources, and supplemented with battery storage, diesel and natural gas. When fully operational, the microgrid at Miramar will have the capacity to power the entire base. California law, however, prevents facilities like Miramar from generating more renewable energy than is needed on base and pumping excess back into the grid.

Were that cap lifted, just four military bases alone located in the California desert could generate 7,000 megawatts of solar energy, the DoD found back in 2012. That’s the equivalent output of seven nuclear power plants. “If people in California want to unleash the full potential of renewables in the state, they have to let the military produce as much renewable energy as they are capable of, because it is jaw-dropping,” said Snell, who added that “this kind of symbiotic relationship is possible nationwide.” Indeed, other bases have implemented their own microgrids, like a Navy shipyard in Maine that hopes to storm-proof its electrical supply.

Nevertheless, while state regulations are certainly an “important part of the puzzle,” said John Conger, at large are a complex set of variables impacting the military’s ability to wean off of fossil fuels. The issue of microgrids, for example, is “location specific,” and is highly dependent upon expertise, he said. “Usually, the more sophisticated the system is, the more difficult it is for in-house staff to maintain it,” Conger added. “They don’t necessarily have the skills to maintain more complicated systems.”

What’s more, the military’s $116 billion underfunded maintenance backlog has an even more profound effect on efforts to push forward with costly infrastructure projects. “DoD has historically underfunded its installations,” Conger added. “And that problem has tendrils that reach into all these other pieces.”