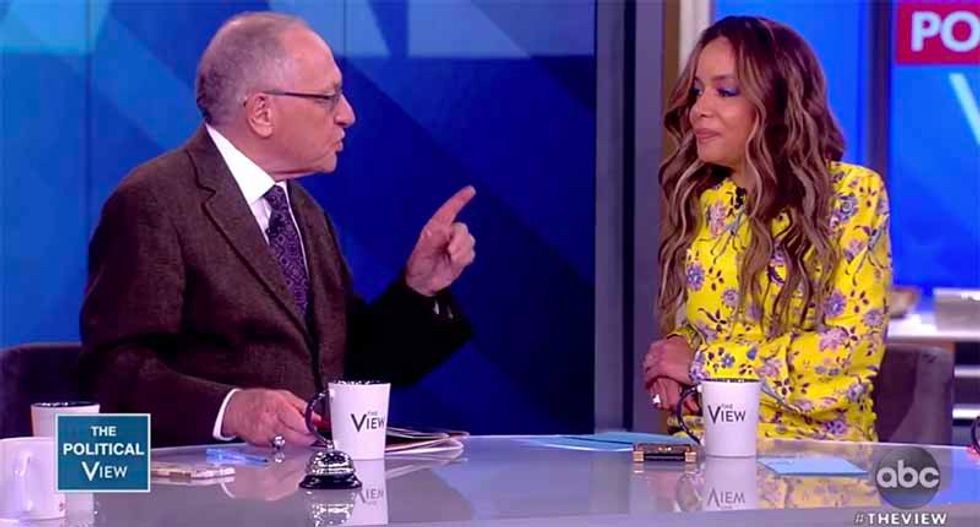 Image via Screengrab.
Travis Gettys
and
Raw Story
May 02, 2019 Video

Dershowitz, who just released a new book analyzing the Mueller report, insisted that a president cannot commit obstruction of justice for actions authorized under Article II in the Constitution, but conceded that not everyone agreed.

“I don’t agree with it, but we can move on,” Hostin said, smiling tightly and looking down.

“Well, I have a question,” he said, wagging a finger in Hostin’s face. “Would you agree with it — this is going to be a hard question for you.”

The smile evaporated from Hostin’s face.

“I thought I asked the questions here, professor,” she said.

Dershowitz asked whether she’d feel the same if the president in question was Hillary Clinton, and co-host Abby Huntsman praised that as a “good question.”

“I would,” said Hostin, a former federal prosecutor. “I absolutely would. If the Mueller report came up with 11 instances of potential obstruction, I think I would have certainly, no question.”

She then challenged Dershowitz to defend Barr’s legal reasoning for clearing Trump on obstruction of justice.

Dershowitz said the attorney general simply believed that Mueller “got it wrong on the law.”

“Mueller says you can obstruct justice even if you engage in constitutionally protected conduct,” he said. “Barr doesn’t believe that. From Barr’s point of view the whole Mueller report is based on a false legal premise. It would have been much better if he wouldn’t have said a word until he read the report and every American read the report.”

Hostin said Congress, not the attorney general, should have made that determination — and Dershowitz disagreed.

“I completely disagree,” he said.

Dershowitz compared Barr’s decision to former FBI director James Comey’s decision not to charge Hillary Clinton in the email investigation during the 2016 election — and Hostin dismissed his argument as ridiculous.

“There’s a DOJ policy, professor, that says you cannot indict a sitting president,” she said. “Perhaps that’s why.