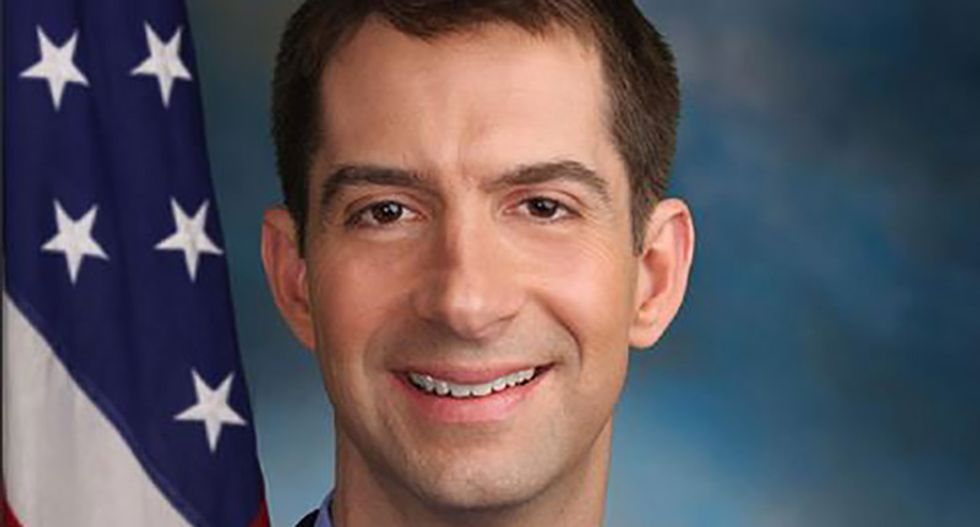 On Wednesday morning, the State Department issued a “Do Not Travel” advisory for Americans considering going to Iraq, ordered nonessential personnel to leave the country, and warned of a “high risk for violence and kidnapping.” This action comes after the United States indicated that Iran was behind attacks on four oil tankers just outside the Persian Gulf. Iran has denied those accusations, but as tensions in the region increase, Republicans are lining up to spread the message that war with Iran would be easy,  and that it’s time for everyone to get behind Donald Trump.

On Tuesday, Republican Sen. Tom Cotton declared that the United States could win a war in Iran with just “Two strikes: the first strike and a last strike.” This is completely at odds with the evaluation of military strategists. There is little doubt about the ability of the U.S. military to overcome that of Iran in the field, but the military of Iran is much more capable than that of Iraq, where the “easy” victory has been followed by well over a decade of low-grade warfare, bombings, and terror attacks in which over 4,400 U.S. soldiers have lost their lives and over 31,000 have been wounded—often severely. In addition, estimates of civilian deaths range from 150,000 to over 650,000. In addition, the war in Iraq generated an increase in international terrorism, including acting as a primary factor in the rise of ISIS. And that was a war that was supposed to be a walkover on all counts.

Iraq’s military was a fraction of what it had been before the 1991 Gulf War when the U.S. invaded in 2003. Its fleet of armored vehicles was aging, short on parts, and completely outmatched by American tanks. The tiny Iraqi Air Force had not one plane from later than the 1980s, and in fact not a single plane got off the ground to challenge the U.S. in the air. None of these things is true of Iran. Not only is the Iranian military generally modern and in good repair, but the nation has also conducted an aggressive program of missile development, including short-range missiles that can be fired from mobile platforms. Included in this are a number of special anti-ship missiles developed especially because Iran expected to be threatened by U.S. carriers. In addition, Iran sports a fleet of “midget” submarines especially designed to create havoc in the Gulf and act against both military and civilian craft. While there is little doubt the U.S. would overcome organized opposition quickly, it’s much less clear that this could be done without significant losses of equipment and lives, as well as a major disruption of the world economy.

The current increase in tensions with Iran is directly related to Donald Trump’s precipitous unilateral withdrawal from the Iran nuclear treaty—an action that was definitely not supported by other signatories to that treaty. And if the United States believes it will have a coalition of allies going into Iran … it had better think again.

The New York Times reports that a British military official—who also happens to be the deputy commander of the coalition fighting ISIS—has stated that he sees “no increased risk from Iran or allied militias,” but the U.S. has fired back to say there are “identified credible threats” that generated the State Department warnings. That’s not to say that European officials and coalition members aren’t seeing aggressive moves in the Middle East. It’s just that those moves have “originated not in Tehran, but in Washington.”

There is an increasing fear that Trump, spurred on by national security adviser John Bolton, thinks that a conflict with Iran could give him a Gulf War-style popularity boost going into 2020. Republicans aren’t making that theory look any weaker by not just manufacturing a case for war, but arguing—already—that it’s time to have Trump’s back in this not-yet-conflict.

On Wednesday, Republican Sen. Marco Rubio issued a series of tweets that started with a claim that the “U.S won’t start a war with Iran, but it will win one that Iran starts.” Rubio continued through a set of statements claiming that “Iran’s proxy forces” in Yemen and Iraq “plan to attack Americans with the intent of inflicting mass casualties,” and that Iran has “spent years” building the ability to attack America through these proxy forces. He provided no evidence for this extraordinary claim.

Rubio then jumped to a new level of odd in spinning a pre-propaganda statement warning that “internal political divisions” in the United States, and the legacy of the Iraq War, will lead “a substantial percentage of Americans” to blame Trump for any war. Because, he says, Iran will use social media to spread this message. Sure, says Rubio, some people might argue that Trump’s pulling out of the treaty without justification might have started this whole series of actions, but just ignore that. Instead, it’s time to show Iran that we are “united.”

Shorter Rubio: If a war starts, it’s not our fault. And even if it is our fault, why are we arguing about whose fault it is anyway? Just support it.

The facts are that Donald Trump has profoundly destabilized not just the Middle East, but the entire world, by showing that America cannot be trusted to abide by the international agreements that it has signed. Pulling out of that treaty not only sparked a potential conflict, but it also all but guaranteed that the United States would go into any such conflict alone.

Any war in Iran should be expected to be an order of magnitude worse than the experience in Iraq—both in the immediate execution and in the aftermath. And no one will be cheering on the United States or providing troops and assistance.

Except, of course, for Saudi Arabia, which is ecstatic about the possibility of Trump taking out its major rival. It appears that someone in the region really has learned about using proxy forces to inflict mass casualties.