Striking driver speaks out: Uber and Lyft are 'slave systems' that exploit workers 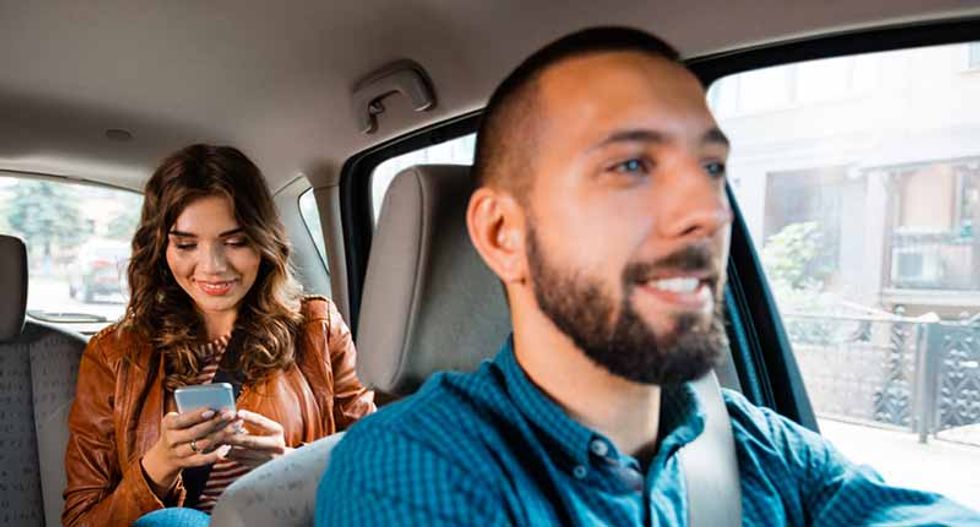 Uber and Lyft drivers in cities around the world went on strike Wednesday to protest low wages and poor treatment of workers just days before Uber’s initial public offering, which could value the company at up to $90 billion dollars. But while Uber prepares for what could be one of the biggest IPOs in history and executives plan to take home millions, drivers say their conditions are worse than ever. Drivers in Los Angeles, London, Melbourne, São Paulo, New York and other cities temporarily halted work Wednesday to demand Uber and other rideshare companies like Lyft treat drivers like full-time employees rather than independent contractors, guarantee a livable income and end deactivations for drivers without explanation, among other demands. On Wednesday, striking Uber and Lyft drivers gathered on Wall Street to call out the practices of the ride-sharing companies. Democracy Now! producer Libby Rainey spoke with Inder Parmar, an Uber driver who says he has lost two-thirds of his income as the company has slashed compensation.

INDER PARMAR: My name is Inder Parmar. I have been driving for Uber since 2013 and my income has been dropped drastically. Because when I was working with Uber, it was three dollars a mile, and I used to get $2.60 a mile. Today I get $1.15 a mile. And when a was driving in 2013-2014, there was 30,000 or 40,000 drivers. Today there is 160,000 drivers. My income has been drastically decreased from $37 an hour to about $10 an hour. And it’s very, very hard to support my family and to myself. I am very lucky; I have three kids who support me. They have very well jobs. They did master’s degrees. And they are helping me out. Without that, I will have no way to survive.

LIBBY RAINEY: You drive up to 80 hours a week, but you’re treated as a part-time employee. How does that affect you?

INDER PARMAR: To work as an Uber driver, my expenses are average about $10 an hour. And when I make $10 an hour, I’m just meeting my expenses. I am not taking any money to my house, to myself. To me, this IPO is an exploitation, and if anybody buys this IPO, they are becoming a member of an exploitation. And this is exploitation of not one driver, two drivers. Almost 3 million drivers.

Like in 1900s, factories were exploiting the factory people in that time. All the political leaders woke up and they made the labor laws. And now, the leaders have to wake up again to make a law for the drivers, too. Because 3 million drivers are suffering, and we need political help and we need some political leaders to take a look into it and the Labor Department to look into it. That Uber should not exploit drivers behind the door of that we are independent contractors.

LIBBY RAINEY: You called Uber, Lyft, these other apps, a slave system. Why?

INDER PARMAR: I call Uber and Lyft as a slave system because as I showed you, I’m getting paid nine, ten dollars an hour, where my expenses are $10 an hour. Literally I went home with zero dollars to myself or to my family. That is why I call these companies exploitation and slave drivers.

LIBBY RAINEY: Finally, you said without the help of your family, you would have been dead, like some other drivers. There has been a spike in suicides by drivers here in New York City. Can you talk about that and the devastation that this leads to, to people’s lives?

INDER PARMAR: Most of these drivers were yellow cab drivers. They took a million-dollar loan on their medallions and they could not make a payment, and the banks were foreclosing on their houses and on their accounts. All those things were getting frozen and they could not take that thing. If you see two years ago, taxi newspapers had no advertisement for suicide help. Today, every taxi newspaper have half a page of ad telling the drivers not to commit suicide, come to them for help.

We don’t need help to commit suicide; we need help to make money. What we were making two years ago, we want to make same amount of money. This way we are financially and physically and mentally healthy. But today, Uber and Lyft have made a situation where we are mentally, physically and financially—all three ways, we are getting exploited by these multibillion-dollar companies. And we do not have any help from nobody.

We do not need a doctor to tell us not to go commit suicide, and we do not need to take a medication for depression. We need to get paid properly for what we do. We were getting paid properly in 2013, 2014, ’15. In ’17, ’18, ’19, our income has been dropped by two thirds, and that is why so many drivers are in depression, so many drivers are committing suicide all over the country. We need our political leaders and labor department to wake up.