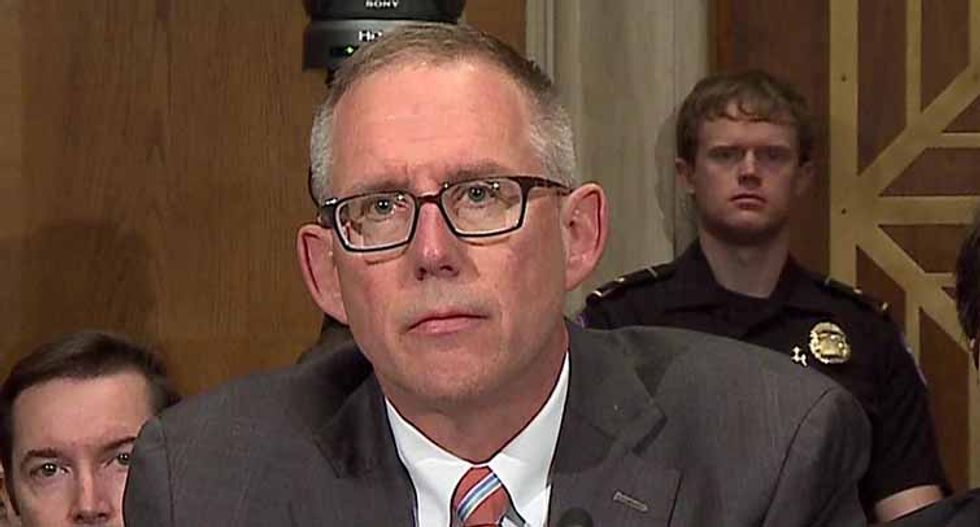 Chairman of the National Labor Relations Board John F. Ring (Image via Screengrab).
Jake Johnson
and
Common Dreams
May 15, 2019 Economy

Uber was in serious need of a lift after a "bleak" and "disappointing" stock market debut last week, and President Donald Trump's National Labor Relations Board gave it just that Tuesday by ruling that the company's drivers are independent contractors—and thus don't have the rights of traditional employees.

In addition to denouncing the substance of the ruling—which could make it virtually impossible for Uber drivers to form a union and bargain for better pay—labor rights advocates raised questions about the NLRB's decision to release its memorandum amid Uber's stock market struggles, particularly given that the document was dated April 16.

The advisory memo (pdf) was made public by the office of NLRB General Counsel Peter Robb, a Trump appointee, just days after Uber drivers throughout the United States and across the globe went on strike for better pay and job security.

The American Prospect's Harold Meyerson wrote in a column Tuesday that it is "hardly surprising" that Trump's NLRB "has now consigned Uber drivers to worker hell."

"What does raise eyebrows is the timing of the release of the counsel's memo—a timing so egregious that it almost makes you wonder if Trump's appointees to the NLRB have shares in Uber that they're frantically trying to unload," Meyerson wrote. "In the Anything-Goes presidential administration of Donald Trump, the egregious has become so normalized and stupidity so commonplace that the board's action not only stinks to high heaven but should be investigated by House Democrats."

In a move that seems aimed at pushing up Uber's stock price after its disappointing IPO, Trump's business-friendly… https://t.co/g8EFk6MQnr
— Steven Greenhouse (@Steven Greenhouse) 1557864589.0

Veena Dubal, an associate professor of employment law at the University of California, Hastings, told The Guardian that the NLRB's decision to make its month-old memo public on Tuesday was "so political, and not even in a subtle way."

"The fact that the office did not release the letter until this particular moment shows they are trying to deter worker organizing," said Dubal.

Laura Padin, senior staff attorney with the National Employment Law Project, said in a statement following the release of the NLRB's memo that "Uber labels its workers as independent contractors in order to avoid the benefits and protections—including the right to bargain collectively—that are owed to employees."

"In fact, drivers have so little independence that they don't know where they are taking a passenger or what they might expect to earn from a trip until that passenger steps in the car," Padin said. "This board, in direct contrast to the Obama-era board, continues to put its thumb on the scale to reward companies that shirk their obligations to their workforce."