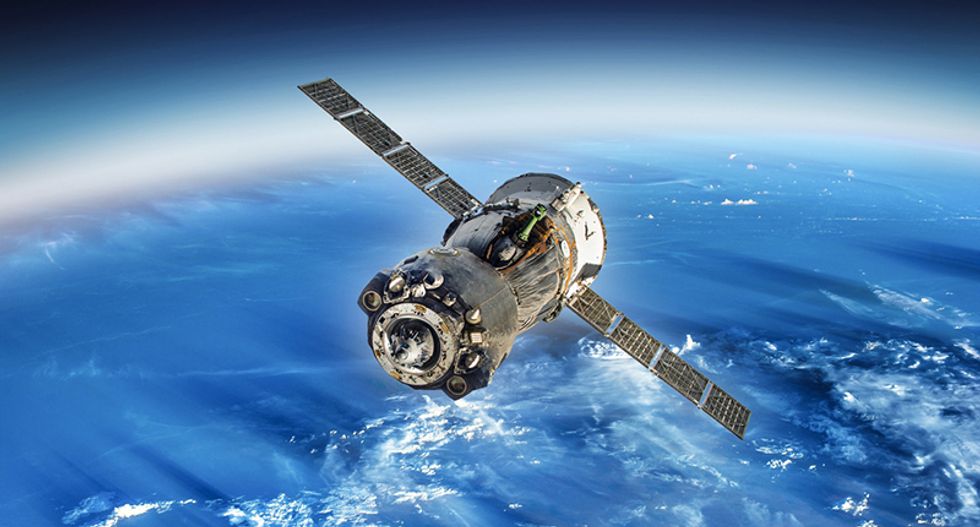 Royalty-free stock photo ID: 623078606 Spaceship in space and earth on the background. Astronomy and outer space conception. Distant galaxies and deep space. Elements of this image furnished by NASA.
Michael J.I. Brown
,
The Conversation
and
Michael J.I. Brown
May 28, 2019

UFOs over Cairns. Lights over Leiden. Glints above Seattle. What’s going on?

The launch of 60 Starlink satellites by Elon Musk’s SpaceX has grabbed the attention of people around the globe. The satellites are part of a fleet that is intended to provide fast internet across the world.

Improved internet services sound great, and Musk is reported to be planning for up to 12,000 satellites in low Earth orbit. But this fleet of satellites could forever change our view of the heavens.

Starlink is an ambitious plan to use satellites in low Earth orbit (about 500km up) to provide global internet services.

This is different from the approach previously used for most communication satellites, in which larger individual satellites were placed in high geosynchronous orbits – that stay in an apparently fixed position above the Equator (about 36,000km up).

But the catch with satellites in low Earth orbit, which move quickly around the world, is they can only look down on a small fraction of the globe, so to get global coverage you need many satellites. The Iridium satellite network used this approach in the 1990s, using dozens of satellites to provide global phone and data services.

Starlink is far more ambitious, with 1,600 satellites in the first phase, increasing to 12,000 satellites during the mid-2020s. For comparison, there are roughly 18,000 objects in Earth orbit that are tracked, including about 2,000 functioning satellites.

Lights in the sky

It’s not unusual to see satellites travelling across the twilight sky. Indeed, there’s a certain thrill to seeing the International Space Station pass overhead, and to know there are people living on board that distant light. But Starlink is something else.

The first 60 satellites, launched by SpaceX last week, were seen travelling in procession across the night sky. Some people knew what they were seeing, but the silent procession of light also generated UFO reports. If you’re lucky, you may see them pass across your skies tonight.

Astronomers’ fears were not put to rest by Musk’s tweets:

Satellites are very definitely visible at night, particularly in the hours before dawn and after sunset, as they are high enough to be illuminated by the Sun. The Space Station’s artificial lighting is effectively irrelevant to its visibility.

In areas near the poles, including Canada and northern Europe, satellites in low Earth orbit can be illuminated throughout the night during the summer months.

Hundreds of satellites being visible to the unaided eye would be a disaster. They would completely ruin our view of the night sky. They would also contaminate astronomical images, leaving long trails across otherwise unblemished images.

The US$466 million Large Synoptic Survey Telescope, based in Chile, is an 8-metre aperture telescope with a 3,200-megapixel camera. It’s designed to rapidly survey the sky during the 2020s.

Is there any cause for optimism? Yes and no.

Musk has produced some amazing feats of technology, such as the SpaceX Falcon and Tesla cars, but he’s also disappointed some on other projects, such as the Hyperloop tunnel transport plan.

Also, initial reports may have overestimated the brightness of the Starlink satellites, with the multiple satellites closely clustered together being confused with one satellite.

While some reports have indicate binoculars are needed to see the individual satellites, they also report that Starlink satellites flare, momentarily becoming brighter than any natural star.

If the individual satellites usually are too faint to be seen with the unaided eye, that would at least preserve the natural wonder of the sky. But professional astronomers like myself may need to prepare for streaky skies ahead. I can’t say I’m looking forward to that.