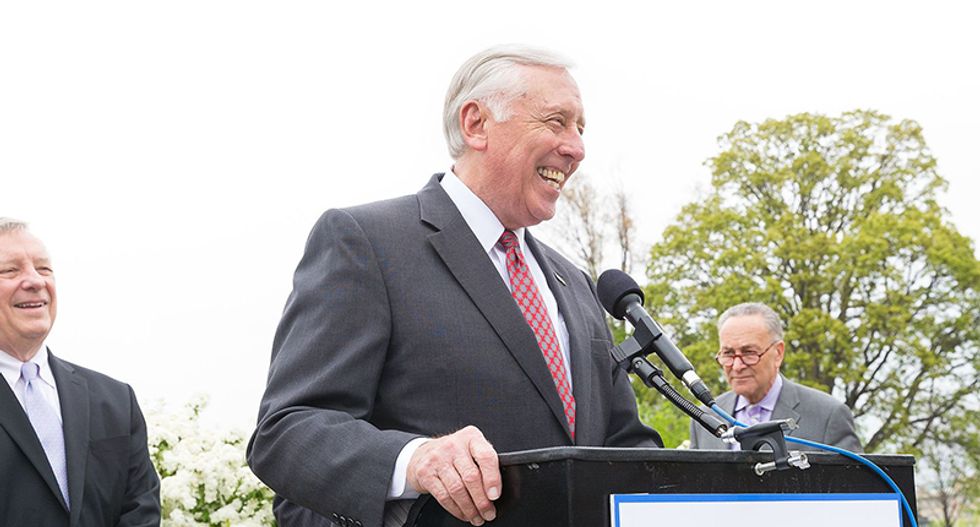 US Department of Labor
Jake Johnson
and
Common Dreams
May 12, 2019

As nurses, doctors, and ordinary Americans ramped up their nationwide effort to build support for Medicare for All at the grassroots level and in Congress, staffers for some of America's top Democratic lawmakers reportedly attended a "luxury" retreat hosted by corporate lobbyists working to undermine the growing push for single-payer.

According to The Intercept's Lee Fang, who first reported on the swanky gathering on Saturday, "around four dozen senior congressional staffers decamped for a weekend of relaxation and discussion at Salamander Resort & Spa" on April 5-7 in Middleburg, Virginia.

Hosted by the group Center Forward—whose board, Fang noted, "is made up almost entirely of registered corporate lobbyists"—the retreat was attended by the chiefs of staff for House Majority Leader Steny Hoyer (D-Md.) and House Majority Whip Jim Clyburn (D-S.C.), as well as many other staffers for centrist Democrats and Republicans.

Wendell Potter, an insurance industry executive-turned-whistleblower, told The Intercept that any "congressional staffer serious about finding solutions wouldn't touch that retreat with a 10-foot pole."

The gathering, Fang reported, "featured a lecture from industry lobbyists leading the charge on undermining progressive healthcare proposals. Center Forward was originally known as the Blue Dog Research Forum, a think tank affiliated with the conservative Blue Dog Coalition of House Democrats; the coalition has pressed the caucus to oppose social welfare spending, taxes on the wealthy, and regulations on business."

"Center Forward's big idea on Medicare Part D, for instance, is to maintain lobbyist-authored provisions of the law that bar the government from bargaining for lower prices for medicine," wrote Fang. "Such restrictions cost taxpayers and patients as much as $73 billion a year while boosting the profits of drugmakers."

The schedule shows that the health care discussion was led by Center Forward board member Liz Greer, a lobbyist at Forbes Tate; the firm manages the Partnership for America's Health Care Future coalition designed to undermine Medicare for All. Paul Kidwell, a lobbyist from the Federation of American Hospitals, and Larry Levitt, from the Kaiser Family Foundation, also spoke. No proponents of Medicare for All were included.

News of the luxury retreat comes around two weeks after Medicare for All received its first-ever congressional hearing before the House Rules Committee, which single-payer proponents hailed as a historic moment in the fight for a just healthcare system.

With comprehensive Medicare for All bills now introduced in both the House and Senate, the insurance and pharmaceutical industries have intensified their campaigns against single-payer, launching misleading attacks in the media and working to stop Medicare for All behind the scenes.

According to Sludge, healthcare industry lobbyists have increased their donations to the DCCC—House Democrats' campaign arm—as progressive lawmakers work to expand support for Medicare for All within the Democratic Party.

Potter—who is now president of the Business Initiative for Health Policy, which supports Medicare for All—told The Intercept that the Virginia retreat was part of the ongoing campaign by private healthcare interests to stop the momentum of single-payer, which poses a major threat to industry profits.