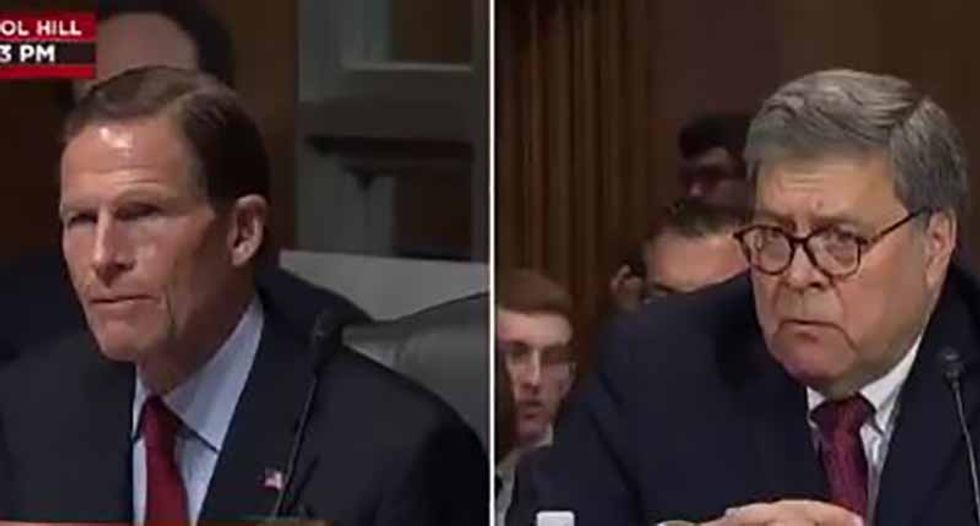 Image via Screengrab
Kerry Eleveld
and
Daily Kos
May 07, 2019 Video

Senate Democrats urged the Justice Department's Inspector General on Monday to investigate any communications between Attorney General William Barr and the White House regarding more than a dozen ongoing probes referred out by special counsel Robert Mueller.

“As you know, the Special Counsel referred 14 cases to other components of the Department of Justice for further investigation," wrote Sens. Richard Blumenthal, Mazie Hirono, and Sheldon Whitehouse, all members of the Judiciary Committee. "It would be highly inappropriate if Mr. Barr did in fact share case names with, and by default revealed the identity of, any defendants in those cases to the White House, particularly given that those same cases have been shielded from public view in the Special Counsel's report," they noted, adding that people in the White House, including Trump and his family, might be implicated in those legal matters.

When Barr was questioned about the investigations during testimony last week, he told Sen. Blumenthal he simply could not recall whether he’d had some, ya know, obscure conversation with White House officials or even Trump himself about probes in which they have a personal interest. Given that information sharing between Barr and the White House regarding the cases could harm ongoing investigations, the senators urged IG Michael Horowitz and the director of the agency's Office of Professional Responsibility, Corey Amundson, to investigate if Barr revealed any case names or defendants to the White House.

In a tweet, Blumenthal said he and his colleagues were seeking to determine whether Barr "opened the door to political interference" in the investigations by sharing critical information with the White House.

Watch the exchange between Blumenthal and Barr below.

WATCH: Sen. Blumenthal questions AG Barr about the status of several other ongoing investigations from the special… https://t.co/CuvtOVL0fk
— MSNBC (@MSNBC) 1556733354.0