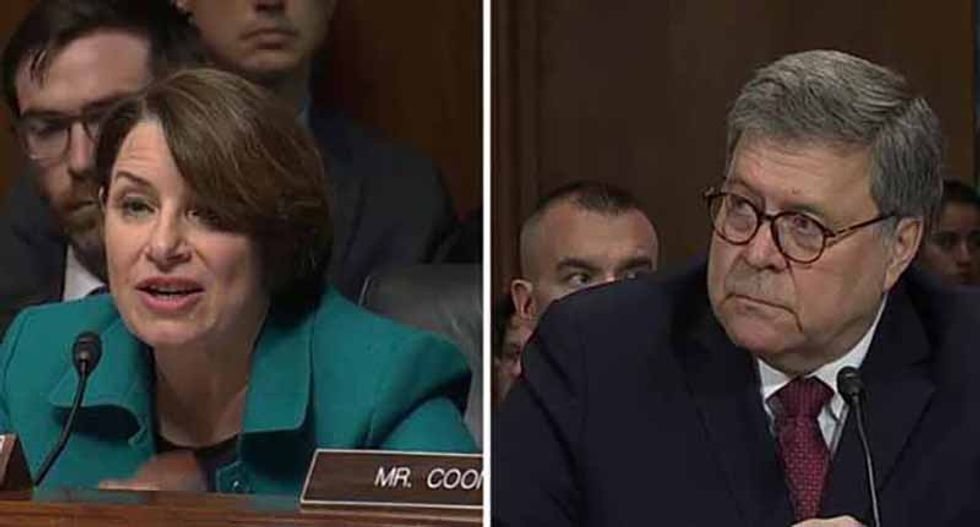 Image via Screengrab.
Sophia Tesfaye
and
Salon
May 02, 2019

After hours of professional answer-dodging from Bill Barr, Democrats on the Senate Judiciary Committee appeared unified in their condemnation of the attorney general’s lack of candor and credibility under oath. Barr seemed to suddenly lose his memory and his ability to speak when Democrats questioned him on Wednesday, whip-snapping his head back and forth as he tried to find an advising attorney to save him. Employing an obvious stalling tactic, Barr painstakingly avoided offering direct answers for fear of contradicting what he previously told Congress. When Republicans praised his professionalism, however, he perked up and answered quickly and concisely.

After Barr’s obfuscating performance, three things are clear: The first is that Robert Mueller must testify before Congress. The second is that such an appearance could well prove problematic for Barr. The third, unfortunately, is that Senate Democrats are in no shape to take advantage.

After committee chair Lindsey Graham’s melodramatic sideshow of an opening statement, the first two hours of Barr’s questioning on Wednesday dawdled along as several Democratic senators seemingly pulled their punches. Hours before the hearing, special counsel Mueller released two letters of objection he sent to Barr which disputed the attorney general’s summary of Mueller's Russia investigation report. Barr published his own four-page memo interpreting Mueller’s 480-page report weeks before it was released. When asked about that, Barr simply pointed out that he had eventually released the report, as if that answered all possible questions.

Two of the three 2020 Democratic presidential hopefuls on the committee, Sen. Amy Klobuchar of Minnesota, and Sen. Cory Booker of New Jersey, adopted serious tones to make clear they were laser-focused on important issues. But their points fell flat and were quickly forgotten. Sen. Kamala Harris of California was the big winner in this micro-primary, and was indeed the only Democrat on Wednesday who asked questions that left Barr flummoxed and on the defensive.

“Did you look at the evidence from the report?” Harris asked. Barr had testified that his decision not to criminal charge the president with obstruction of justice was based on the lack of an adequate case, as laid out in Mueller’s report.

“Not to my knowledge,” Barr said.

“Did anyone in your office?” Harris followed up.

"We accepted the statements in the report as the actual record. We did not go underneath it to see whether or not they were accurate. We accepted it as accurate," Barr said Wednesday, in explaining that he had not actually bothered to examine the underlying evidence gathered by the special counsel before deciding whether the president of the United States had committed a crime.

As Mueller’s newly released letters reveal, it’s striking that Barr now says he relied on the report to accurately portray its findings but then refused to use the statements and summaries provided by Mueller’s team, opting instead to offer a softer narrative of his own devising.

Harris also nailed Barr on his decision to not ask Department of Justice ethics officials if Rosenstein, his deputy, could ethically provide a judgment on the report in which he featured as a witness. She also pressed the attorney general on whether President Trump or other White House personnel had asked him to open an investigation into anyone. (She didn't name anyone in particular, but we might just all have some idea.)

"There have been discussions of matters out there,” Barr responded. “They have not asked me to open an investigation."

Beside Harris’ prosecutorial flare, Sen. Mazie Hirono of Hawaii was the only other Democrat on Wednesday willing to confront Barr.

"You lied to Congress,” Hirono said directly to Barr. “But now we know more about your deep involvement and trying to cover up for Donald Trump. Being attorney general of the United States is a sacred trust. You have betrayed that trust. America deserves better. You should resign,” she said.

The gravity of the situation, with an attorney general attempting to whitewash a federal investigation of the president without even considering the actual evidence, would seem to justify Hirono’s accusations. But what will come of Wednesday's hearing?

Despite their hints and whispers, Senate Democrats don't have the power to impeach Barr until they take back the majority. Meanwhile, the Republicans are simply trying to run out the clock until the pendulum swings back to the Democrats, at which point they can rain down presidential pardons on all and sundry, while screaming that anyone who looks into these matters any further is persecuting political enemies. Will that work? Oh, almost certainly. Democrats, as usual, will back down.