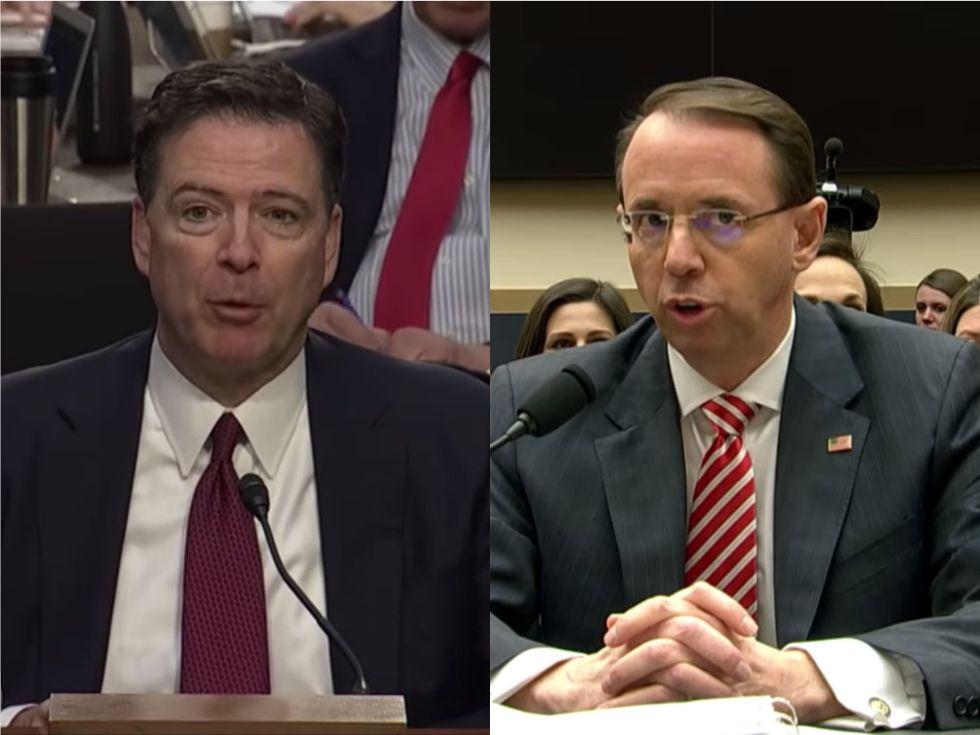 Former Deputy Attorney General Rod Rosenstein only left his job last week, but he is already letting loose in public.

Speaking at a group for civics and business leaders on Monday night, Rosenstein took a shot at former FBI Director James Comey, a figure with whom he has become entangled in President Donald Trump's time in office.

He said Comey is now a "partisan pundit, selling books and earning speaking fees while speculating about the strength of my character and the fate of my immortal soul. That is disappointing.”

He was clearly referring to a recent op-ed in the New York Times written by Comey about how Trump "co-opts" the people who serve under him. Comey wrote:

And how could Rod Rosenstein, the deputy attorney general, after the release of Mr. Mueller’s report that detailed Mr. Trump’s determined efforts to obstruct justice, give a speech quoting the president on the importance of the rule of law? Or on resigning, thank a president who relentlessly attacked both him and the Department of Justice he led for “the courtesy and humor you often display in our personal conversations”

[P]roximity to an amoral leader reveals something depressing. I think that’s at least part of what we’ve seen with Bill Barr and Rod Rosenstein. Accomplished people lacking inner strength can’t resist the compromises necessary to survive Mr. Trump and that adds up to something they will never recover from. It takes character like Mr. Mattis’s to avoid the damage, because Mr. Trump eats your soul in small bites.

"Speculating about souls is not a job for police and prosecutors," said Rosenstein. This comment was particularly odd because Rosenstein has a unique role in the course of events that led to Comey no longer being in law enforcement.

Rosenstein on Monday also defended his role in Comey's firing, which had eventually prompted him to appoint Special Counsel Robert Mueller to lead the Russia investigation. Though Trump made clear that his firing of Comey was about the Russia investigation, Rosenstein wrote a memo for the president arguing that the then-director's actions during the Hillary Clinton investigation made him incapable for leading the bureau. (This memo was used as a smokescreen to cover the real reason for the termination.) On Monday, Rosenstein said that Comey's actions "were not within the range of reasonable decisions."

The former deputy attorney general's turn against Comey is particularly interesting in light of former Acting FBI Director Andrew McCabe's book, "The Threat." McCabe briefly took over for Comey after his firing, and he described in the book Rosenstein expressing admiring for Comey at that time and even contemplating reaching out to Comey for advice on what to do — which McCabe thought would be inappropriate.

“My soul and character are pretty much the same today as they were two years ago,” Rosenstein said Monday. “I took a few hits and made some enemies during my time in the arena, but I held my ground and made a lot of friends.”

Whatever he thinks of his soul, Rosenstein has still not addressed a core defect in his actions. He oversaw Mueller's investigation into Trump's potential obstruction of justice, an investigation that centered on an event in which Rosenstein was a key player. Then, along with Attorney General Bill Barr, he announced at the end of the investigation that there was not enough evidence to conclude Trump obstructed justice. This represents a clear conflict of interest that Rosenstein hasn't defended. Even if he doesn't think his actions were affected by the conflict, the appearance of a lack of integrity remains — which is exactly the issue he sought to avoid by appointing a special counsel in the first place.