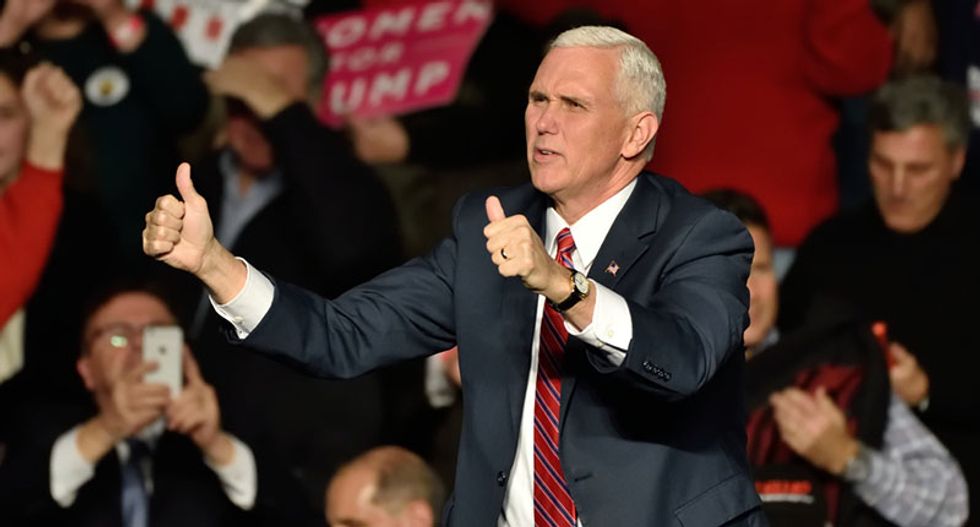 Royalty-free stock photo ID: 538492774 HERSHEY, PA - DECEMBER 15, 2016: Vice President-Elect Mike Pence gives a thumbs up gesture as he arrives on stage to deliver a speech to a large crowd at a Thank You rally held at the Giant Center. - Image
Travis Gettys
and
Raw Story
May 13, 2019 Trump

Vice President Mike Pence played a key role in the events that eventually led to the appointment of special counsel Robert Mueller — and increasingly paranoid right-wingers are starting to notice.

The vice president could find himself in an odd, and potentially dangerous, position in the coming months as the House of Representatives investigate some of the findings presented by Mueller, who was appointed in May 2017 after President Donald Trump fired then-FBI director James Comey, reported Christian Vanderbrouk for The Bulwark.

That firing, which Mueller seems to have indicated was obstruction of justice, might not have taken place if not for Pence pushing out Trump’s first national security adviser, Michael Flynn.

The special counsel report shows that Trump’s incoming national security team worked to keep Pence out of the loop about Flynn’s discussions about easing sanctions related to Russian efforts to influence the election.

Flynn apparently misled Pence and Trump’s chief of staff and press secretary in January 2017 about his contacts with the Russian ambassador, which set in motion the chain of events that directly led to Mueller’s appointment, the national security adviser’s resignation and eventual guilty plea — and possibly even Trump’s impeachment.

Other members of the Trump transition team that Pence led, and possibly even Trump himself, knew about Flynn’s contacts with the ambassador, and the vice president must have wondered why the retired general had lied to him.

Acting attorney general Sally Yates warned the president’s inner circle on Jan. 26, 2017, after the national security adviser had made false statements to the FBI for which he later pleaded guilty, but no immediate action was taken by the White House — although former FBI deputy director Andrew McCabe said Pence was alarmed.

“Immediately his face changed,” McCabe wrote in a book published earlier this year. “His expression turned very cold. It hardened … His head shook, but barely — tiny shakes of no … He said a few things along the lines of I can’t believe this.”

Pence and senior aides reportedly asked Trump to fire Flynn, but he refused, and then-chief of staff Reince Priebus, White House counsel Don McGahn and another White House attorney speculated that the president must have been aware of the national security adviser’s back-channel communications with Russia.

They were concerned that this gave Flynn potential blackmail leverage over the president.

Flynn was pushed out of the White House on Feb. 14, 2017, after two senior government officials instructed aides to leak sensitive information about Flynn’s false statements to The Washington Post and other news organizations.

That same day, Trump met with Comey and asked him to drop the FBI investigation of his outgoing national security adviser, which the law enforcement official refused to do.

Vanderbrouk wondered whether the vice president was alarmed by Trump’s continued loyalty to Flynn, whom the president’s supporters consider a victim, and he said it was only a matter of time before the president and his allies eventually blame Pence for Trump’s political predicament.

“Does Pence have it in him to flip?” Vanderbrouk asked. “Will he seize the moment and position himself as the Gerald Ford to Trump’s Nixon? It’s fun to speculate, but the prospect seems doubtful.”