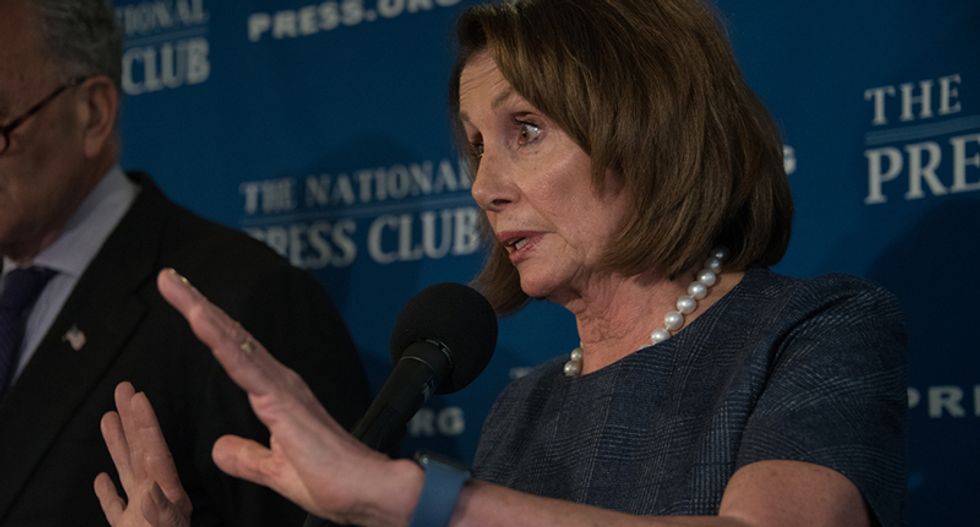 According to the Washington Post, at least "five members of Pelosi's leadership team — four of whom also sit on the House Judiciary Committee, with jurisdiction over impeachment — pressed Pelosi (D-Calif.) in a closed-door leadership meeting to allow the panel to start an [impeachment] inquiry, which they argued would help investigators attain documents and testimony that Trump has blocked."

One of the lawmakers who reportedly pressed Pelosi to approve impeachment proceedings on Monday was House Judiciary Committee chairman Rep. Jerry Nadler (D-N.Y.), who has faced calls to act as his repeated attempts to investigate President Donald Trump and administration officials have been brazenly denied by the White House.

"The meeting marks the first time a chairman and top rank-and-file lawmakers — including members of Pelosi's leadership team — have lobbied her to change her long-held position on impeachment," the Post reported.

If McGahn doesn't show up for his scheduled testimony before the Judiciary Committee at 10:00am ET Tuesday, "a core group of Judiciary Democrats plans" to begin publicly calling for impeachment proceedings against Trump, according to the Post.

"That inquiry is also what happened during Watergate," Rep. Ted Lieu (D-Calif.) told the Post in an interview following the Democrats' private meeting. "It's not like the House Judiciary Committee just dropped articles of impeachment. There was an investigation that preceded it. This inquiry could lead to impeachment, or it could lead to nothing. But I think if McGahn doesn't show, we have to at least start it."

Democratic Reps. Jamie Raskin (Md.), Joe Neguse (Colo.), and David Cicilline (R.I.)—all of whom are members of the House Judiciary Committee—reportedly joined Lieu in pressuring the House Speaker to support an impeachment inquiry.

"There's no doubt that opening an inquiry strengthens the hand of Congress in forcing compliance with subpoenas, whether it's for documents or individuals," Cicilline told the Post.

Raskin reportedly made a similar case during the meeting, arguing that impeachment hearings "would allow leadership to streamline and centralize all of the investigations into one—and let everyone else focus on the Democratic agenda items that won them the majority in 2018," the Post reported.

Pelosi, however, refused to budge despite backlash from her own leadership team.

House Majority Leader Steny Hoyer (D-Md.), DCCC chair Rep. Cheri Bustos (D-Ill.), and Democratic caucus chair Rep. Hakeem Jeffries (D-N.Y.) all reportedly sided with Pelosi in the face of pressure from their colleagues as well as grassroots demands for Democrats to act on their grave warnings that the U.S. is in the midst of a "constitutional crisis."

"This isn't about politics at all. It's about patriotism. It's about the strength we need to have to see things through," Pelosi reportedly said of her refusal to sign off on impeachment hearings, a remark that provoked bafflement among progressives on social media.

"Plenty of liberals are asking why there aren't more Republican members of Congress with the guts, eloquence, or honesty to say what Amash has said," The Intercept's Mehdi Hasan wrote in a column on Monday. "It's a good question. But a better, more relevant question is this: Why aren't there more Democrats willing to say the same?"

During a live event in Washington, D.C., Monday night, Rep. Pramila Jayapal (D-Wash.)—a member of the House Judiciary Committee—made the case for launching impeachment proceedings against the president right away.

"I really believe we are now at the point where we have to start an impeachment inquiry. I don't say that lightly, I mean I think we have taken every possible step we can," said Jayapal. "We've issued subpoenas, we've called for witnesses, the president has issued blanket executive privilege over the Mueller report."

"If you have a president who thinks he's king, and isn't accountable to anybody, and is above the law," Jayapal said, "that is absolutely not acceptable."