Pelosi's piercing critique of Trump: Those close to him should stage an 'intervention for the good of the country' 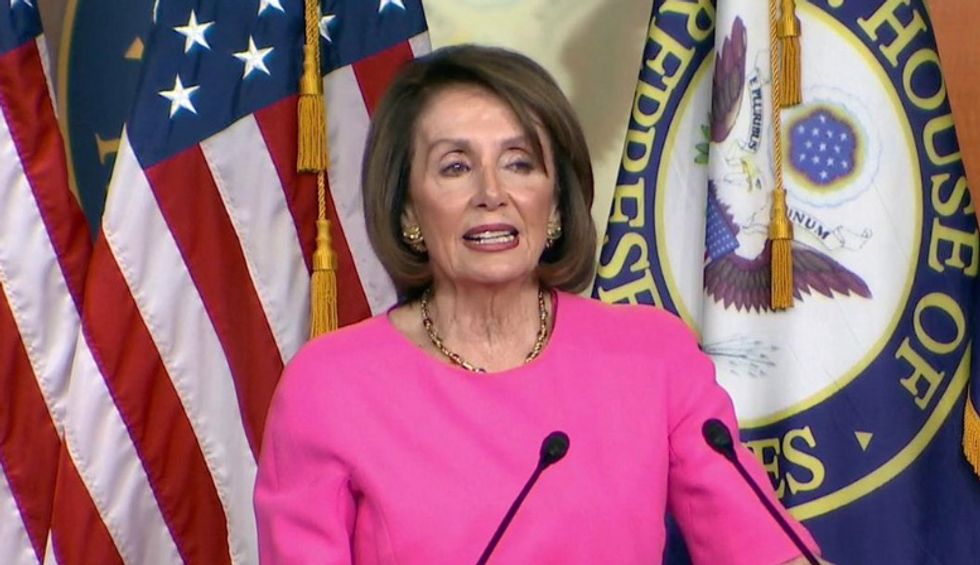 Image via Screengrab.
David Badash
and
The New Civil Rights Movement
May 23, 2019 Video

Speaker of the House Nancy Pelosi goaded President Donald Trump Thursday morning in her weekly news conference, one day after the President, as she explained, "pounded the table," had a "temper tantrum," and "stormed out the door" of the Oval office minutes after she and Leader Chuck Schumer showed up for a meeting on infrastructure.

The Speaker also urged those close to the President to hold "an intervention."

Speaker Nancy Pelosi: "I pray for the President of the United States. I wish that his family or his administration… https://t.co/UiqrfjQASy
— This Week (@This Week) 1558625694.0

She described his actions as "an assault on the Constitution," and said Democrats can "walk and chew gum at the same time."

She also said "it cannot be denied" that Trump is obstructing justice, is committing "impeachable offenses," and is "engaged in a cover-up."

She told reporters that the House Democratic Caucus is not on a path to impeachment, but warned that President Trump "wants us to be."

Pelosi accused Trump, which media reports have confirmed, of not being prepared for their "historic meeting."

"I will not take responsibility for his irresponsible behavior."

The Speaker also quoted Trump's refusal to work with House Democrats, saying he told her "I can't work with you," and suggested, "maybe he wants to take a leave of absence."

"The White House is just crying out for impeachment," she added.