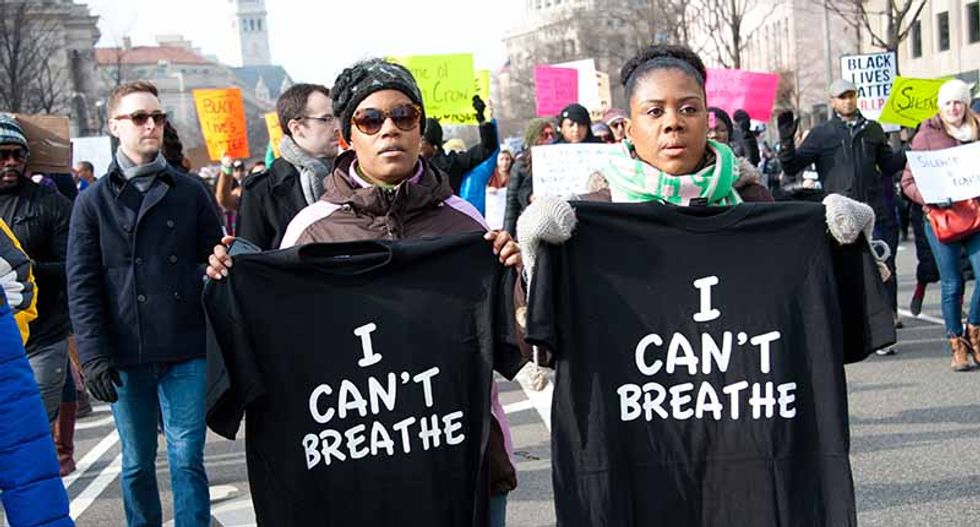 Image via Shutterstock.
Matthew Rozsa
and
Salon
May 15, 2019 Human Rights

Investigators from the New York Police Department have determined that the officer who choked and killed Eric Garner in 2014 was using a chokehold method that is forbidden by the department.

Internal affairs investigators determined that Officer Daniel Pantaleo had used the chokehold and inadvertently caused Garner's death while arresting him for selling "loosies," or illegal single cigarettes, near the Staten Island Ferry Terminal, according to The New York Times. Garner's death was caught on videotape and his last words, "I can't breathe," became a rallying cry for protesters who were outraged by what they perceived as police brutality. Thousands of protesters were outraged both at the tactics used by the officers on tape and the fact that Garner's alleged criminal offense was so minor.

Jonathan Fogel, the prosecutor for the review board, described the video as showing Officer Pantaleo with a "vise grip" around Garner's neck. Fogel argued that the New York Police Department had "explicitly, unequivocally and absolutely" banned this type of chokehold, which Fogel argued had resulted in "a lethal cascade" culminating in Garner's cardiac arrest and death.

"It is an outrage that Eric Garner is not alive today," Fogel said. "He did not deserve a death sentence over loosies."

While the NYPD did determine that Pantaleo had acted wrongly in Garner's case, their conclusion is bound to raise further questions about why Pantaleo was allowed to stay on desk duty for the last five years even as the investigation dragged on.

"I could go on and on about the historical links between cities, chokeholds and people," Shaun Ossei-Owusu wrote for Salon at the time of Garner's death. "But the death of Eric Garner also offers insights into the importance and multifaceted nature of police surveillance. Besides the absurdity of heavily policing such a low-level violation, the first problem is who the police decide to focus their attention on. In Garner’s case, the police argued that he had been accused of selling loose cigarettes in the past. This history, coupled with suspicions that he sold loosies that fateful day, justified apprehending him."

He added, "This approach appears logical but is operates discriminately. When law enforcement focuses its efforts on a particular neighborhood or group of people, it yields overrepresentations. It also creates animosities on both sides and leads to violent outcomes. This could be because of minorities’ sense of being aggrieved and racially targeted and/or police officers’ almost exclusive contact with these groups, which can prejudicially influence their assumptions about criminality and danger. Both seemed to be the case for Garner."