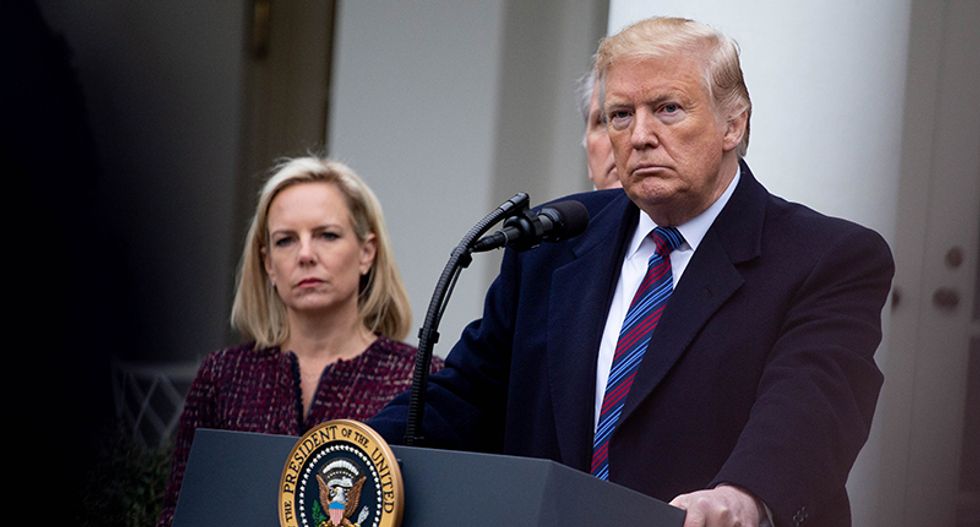 Image via Shutterstock.
Eoin Higgins
and
Common Dreams
May 14, 2019 Immigration

In the weeks before they were fired, top officials in the Trump administration reportedly raised concerns about a White House plan to deport whole families in a proposed show of force against migrants in the country—not for ethical reasons, but because such a plan could raise logistical and technical difficulties.

Former Department of Homeland Security (DHS) Secretary Kirstjen Nielsen and former Acting Director of Immigration and Customs Enforcement (ICE) Ronald Vitiello both found the administration's plan unworkable and stopped the plan due to what reporting from The Washington Post described as a "lack of preparation" and "the risk of public outrage and worries that it would divert resources from the border."

That cold approach and the lack of a moral problem with the proposal led writer John R. Stanton to comment that the real issue was that the backlash to the plan might hurt DHS and ICE plans for future attacks on migrants.

"Please get beyond the headline to the part where it says none of the DHS officials had any ethical concerns with this," said Stanton. "Nielsen et al were just worried it would hurt their other ghoulish plans for immigrants."

Please get beyond the headline to the part where it says none of the DHS officials had any ethical concerns with th… https://t.co/KCieUNCm5D
— john r stanton (@john r stanton) 1557843570.0

According to the Post, the operation would have targeted migrant families in 10 cities, including New York, Los Angeles, and Chicago.

According to seven current and former Department of Homeland Security officials, the administration wanted to target the crush of families that had crossed the U.S.-Mexico border after the president’s failed "zero tolerance" prosecution push in early 2018. The ultimate purpose, the officials said, was a show of force to send the message that the United States was going to get tough by swiftly moving to detain and deport recent immigrants — including families with children.

The administration's initial plan for the deportation operation would have imprisoned 2,500 migrants—and the plan ultimately called for locking up upwards of 10,000 people. The plan was for a major, public, and aggressive push that would send a message.

The plan remains under consideration.

Nielsen resigned last month, just days after the White House announced it was withdrawing Vitiello's nomination. Both dismissals, officials who spoke with the Postsaid, were at least in part because of their opposition to the plan.

Albence, the former ICE deputy director who was eager to implement the operation, succeeded Vitiello in April.

The report's explosive findings had liberals and progressives objecting Tuesday to both the proposal and what was seen as an attempt by Nielsen to rewrite her legacy and rehabilitate her public image.

"Screw this spin," said AV Club writer Dennis Perkins. "Secretary Nielsen is hell-bound for this hateful, racist bullshit and nothing will ever change that.

Screw this spin—@SecNielsen is hell-bound for this hateful, racist bullshit and nothing will ever change that. https://t.co/bD3rKfwSLJ
— Dennis Perkins (@Dennis Perkins) 1557848143.0

"There is nothing but evil here including Nielsen and Vitiello," immigration lawyer David Leopold said.

@MollyJongFast There is nothing but evil here including Nielsen & Vitiello: “the objections [they] raised regarding… https://t.co/8H3ZqVQs0j
— David Leopold (@David Leopold) 1557796692.0

The heads of DHS and ICE just wanted the plan to be "better organized," said novelist Laila Lalami.

"This administration is fucking evil," said Olivares, "and you should care."